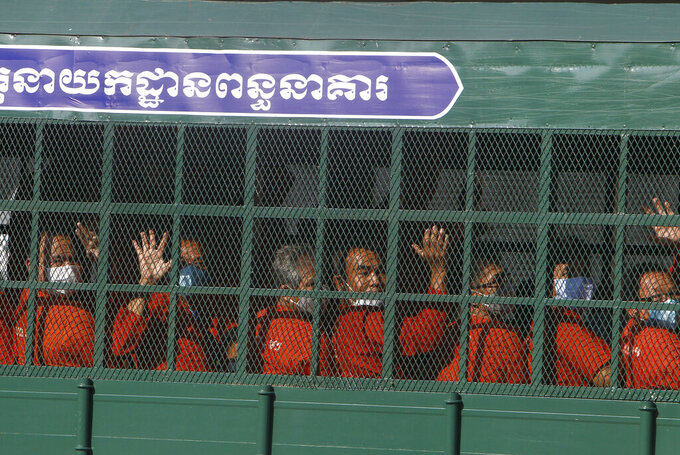 Heng Sinith, ASSOCIATED PRESS
Cambodian prisoners on a prisoner truck arrive at the Phnom Penh Municipal Court in Phnom Penh, Cambodia, Wednesday, Nov. 17, 2021. More than a dozen activists who were former members of the dissolved opposition party appeared at the court for a bail hearing. (AP Photo/Heng Sinith)

PHNOM PENH, Cambodia (AP) — A court in Cambodia on Wednesday denied the bail requests of 14 detained members of a dissolved opposition party who have been charged with treason for taking part in nonviolent political activities over the past several years.

The Phnom Penh Municipal Court said it denied the requests from the former members of the disbanded Cambodia National Rescue Party because their cases will come to trial soon, on Dec. 7 and 9, said Am Sam Ath, a representative of the local human rights group Licadho.

After an appeals court last week freed 18 activists from prison, including a prominent labor leader who has been a longtime critic of the government, there had been hope among friends and family of the 14 that they would be released.

But the denial of bail tamped down speculation that last week’s releases signaled a liberalizing trend for the government of Prime Minister Hun Sen, who has been in power for 36 years and has often been accused of heading an authoritarian regime.

The 14 are charged with conspiracy to commit treason and incitement to commit a felony, and all have been in pre-trial detention for more than a year. Defense lawyer Sam Sokong said most of the defendants are accused of organizing a failed trip back to Cambodia in November 2019 by former opposition leader Sam Rainsy.

Sam Rainsy, the co-founder of the party, has been in exile since 2016 to avoid serving prison sentences on defamation and other charges. He says the cases against him are politically motivated, and his attempted return was blocked by the government.

Separately, the Phnom Penh Municipal Court announced this week it has ordered the sale of a building owned by Sam Rainsy that had been used as the party headquarters.

Money from the sale is to go to several top government officials and the government itself for legal judgments they won against Sam Rainsy.

As the sole opposition party in Parliament, the Cambodia National Rescue Party had been expected to present a strong challenge to Hun Sen’s ruling Cambodian People’s Party in the 2018 general election. But in late 2017, Hun Sen launched a sweeping crackdown on his opponents and the CNRP was forced by the high court to disband and its lawmakers were removed from Parliament. Many people believe the court acted to ensure that Hun Sen’s party won the polls. It ended up sweeping all the seats.

The wife of Kak Komphear, one of the defendants to stand trial next month, said the group pleaded at Wednesday's court hearing for their release on the grounds they are in poor health and their families are suffering because their money earners are in prison.

Prum Chantha, a member of Friday Wives, a group organized to support the defendants, said they also promised not to flee and to appear in court when summoned. Her husband has been in detention since May 2020.

Their 16-year-old son, Kak Sovannchhay, who is autistic, was convicted earlier this month of incitement to commit a felony and public insult for comments he made in a Telegram chat group defending his father, and for sharing Facebook posts criticizing Hun Sen.

He was sentenced to eight months in prison but released on Nov. 10 after his case drew international attention.