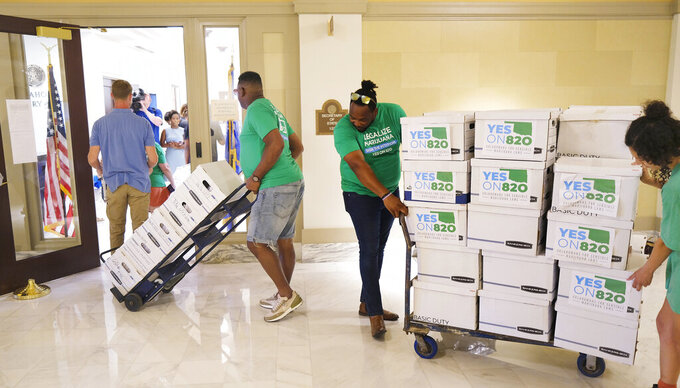 Doug Hoke, ASSOCIATED PRESS
Oklahomans for Sensible Marijuana Laws delivered over 164,000 signatures to the Office of the Secretary of State at the Oklahoma State Capitol on Tuesday, July 5, 2022, in Oklahoma City. (Doug Hoke,/The Oklahoman via AP) 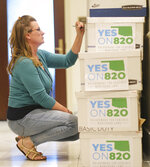 OKLAHOMA CITY (AP) — A group seeking a statewide vote on whether to fully legalize adult use of marijuana in Oklahoma submitted boxes of signatures on Tuesday with hopes of getting the question on the November ballot.

Oklahomans for Sensible Marijuana Laws submitted more than 164,000 signatures to the Office of the Secretary of State, far more than the roughly 95,000 they need to qualify State Question 820 for the ballot. They also beat the Aug. 1 deadline they had by nearly a month.

Campaign advisor Ryan Kiesel, an attorney and former Democratic state lawmaker, said the extra signatures and the additional time should ensure the question makes it on the November general election ballot.

“I think it's very unlikely that there's a credible challenge to our process that could delay this," Kiesel said.

If approved by voters, the question would legalize the use of marijuana for any adult over the age of 21. Marijuana sales would be subjected to a 15% excise tax on top of the standard sales tax, and the revenue it generates would be used to help fund local municipalities, the court system, public schools, substance abuse treatment and the state's general revenue fund.

The current 7% excise tax on medical marijuana sales generates about $5 million in state revenue each month, plus another roughly $6 million each month in state and local sales taxes, according to figures from the Oklahoma Tax Commission.

The proposal also outlines a judicial process for people to seek expungement or dismissal of prior marijuana-related convictions.

“We create a very simple, efficient, low-cost way for Oklahomans to be able to get those charges and convictions off their record," Kiesel said.

Oklahoma already has one of the most robust medical marijuana programs in the country, with roughly 10% of the state's residents having state-issued medical cards that allow them to purchase, grow and consume marijuana. Kiesel said full legalization would dovetail with the state's existing medical marijuana program, but allow adults without a license, including those who visit from out of state, to purchase marijuana.

The Yes on 820 campaign raised about $70,000, all of it from two advocacy groups: New York-based Drug Policy Action, which advocates for sensible drug laws, and Washington, D.C.-based New Approach Advocacy Fund, which supports cannabis reform in states.

A separate proposal that would legalize marijuana in Oklahoma through a constitutional amendment is still in the signature gathering phase.