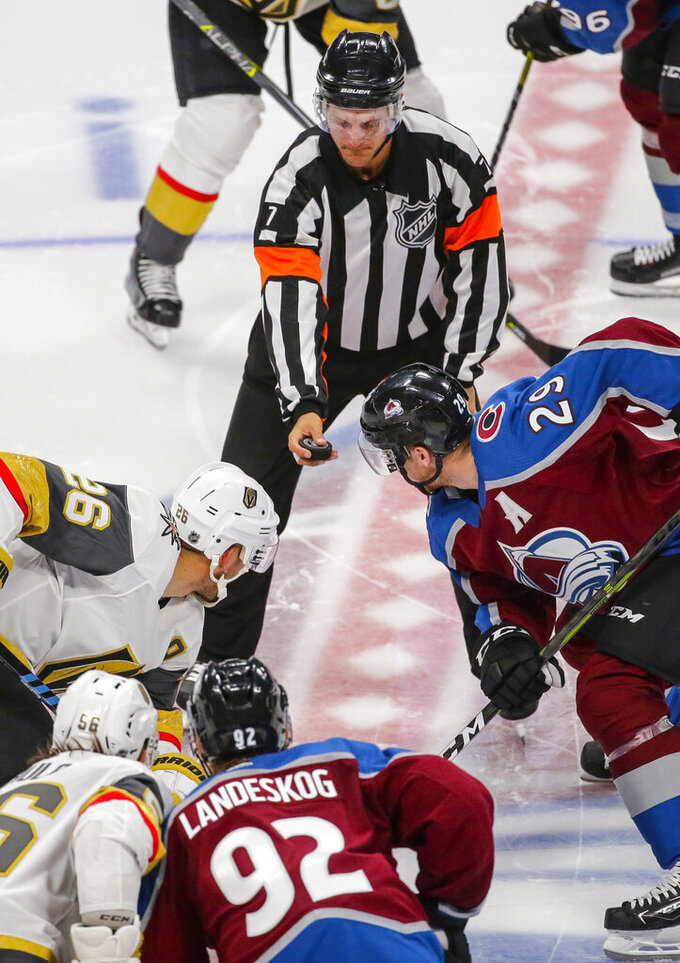 It has been almost three decades since the NHL took the names off the back of officials' jerseys and replaced them with numbers.

Since then, with the notable exception of Wes McCauley and his popular, flamboyant calls, most referees and linesmen generally fly under the radar and don't mind the relative anonymity.

But it's their lives away from the rink that humanize them to players and coaches, by building rapport and helping games go smoother.

“It’s huge,” referee Garrett Rank said. “It kind of puts you in a light of, ‘Hey, this guy’s a normal human being.’ We like to say we get in the way of winning, so they’re kind of always being hard on us and it’s nice just to have a little bit lighter of a conversation.”

Rank is a mid-amateur golfer from Canada who qualified for the 2018 U.S. Open. Fellow ref Corey Syvret is a former minor league player who transitioned to a job he never thought he'd want. And linesman Ryan Daisy, fresh off working his first Stanley Cup Final, enjoys things away from hockey that can be the total opposite of working under the microscope on the ice.

Growing up in a small town in southern Ontario, Rank played hockey in the winter and golf in the summer. As an adult, he's able to do the same thing — just replace playing with refereeing.

Rank wasn't sure he'd be able to keep those separate passions going to this level: He has worked more than 450 NHL games and ranks 164th in the world among amateur golfers; he has reached as high as 34th.

Limited to eight to 10 rounds of golf during the hockey season, Rank identifies 70% as a referee and 30% with his other sport.

“I’m fortunate enough to have a net and kind of a half-simulator in my garage, so I hit balls a bunch in there when I’m home," Rank said. "In the summer I play golf every day."

Rank finished fifth at the Crump Cup Memorial Tournament at Pine Valley in New Jersey. In 2012, he was one match at the U.S. Mid-Amateur Championship from earning a spot at the Masters.

In between, Rank commuted between Hershey, Pennsylvania, for the American Hockey League's Calder Cup Final and the U.S Amateur Four-Ball Championship in Mamaroneck, New York, in 2016. He laid his referee gear out under his car to dry at prestigious Winged Foot Golf Club and worried he'd be asked not to return, but he and partner Patrick Christovich actually reached the semifinals.

As recently as this past spring, Rank was pulled off the course five holes into a U.S. Open qualifier to serve as the standby official for Game 1 of the second-round playoff series between Colorado and St. Louis.

“In officiating, we get one look at it in really high speed and you have to make a decision and be really decisive,” he said. “And then I think just the pressure situations that come with being in a big hockey game or playing in a big golf tournament: just being susceptible to that for the whole year.”

It also helps to have something outside hockey to talk about with avid golfers like Washington's T.J. Oshie, Dallas' Joe Pavelski and Vegas' Mark Stone. He said golf comes up every game he works.

“There’s always one guy that loves golf on each team, and they’ll always swing by and ask me if I played that morning or if I’ve been playing or any good results in the summertime," Rank said. “I’ve kind of gotten to know the guys that like golf. I make it a point to use it to my advantage, kind of just to build some rapport and have a relationship with some stuff away from the hockey rink.”

Older brother Danny was already well on his way to a hockey career at age 15, and 11-year-old Corey Syvret wanted to follow his path. When the two worked out at the YMCA in Waterdown, Ontario, in the early 2000s they constantly ran into veteran NHL linesman Mark Shewchyk, a family friend who tried to talk them into officiating someday.

“We’re thinking: ‘Why would I ever want to become an official? I want to play in the National Hockey League,'” Corey recalled.

Like his brother and their father, Dave, he was picked in the NHL draft — in 2007 in the sixth round by Florida — but then his career stalled in the minors. Shewchyk kept telling Syvret it would be a good time to try a different path to the NHL.

Syvret agreed he would give it a shot but wanted to win at least one championship and did with the ECHL's Alaska Aces in 2014. In his final few years playing, he kept a close eye on officials.

“I studied officiating as I was playing," he said. "I was kind of watching how the guys worked, what I felt about that call, how I felt I could have done it better and just kind of gained some knowledge that way.”

Syvret retired as a player following the 2016-17 season, impressed at the annual officials combine and made his NHL refereeing debut in the spring of 2018. Now 33, his mindset has switched from “trying to figure a way how to break the rules to how to enforce them," but he approaches training and preparing to officiate games the same way he did playing.

That includes Saturdays from noon to midnight and weeknights watching full slates of NHL games with his parents, one of the things Syvret enjoys since it's work preparation as quality family time. When it's not hockey season, he's usually hanging out by the pool at his family's house with a radio hanging from the fence as he listens to Toronto Blue Jays baseball games, cycling, golfing or playing tennis.

"Just a lot of family and sports and that’s what’s gotten to me where I am right now," he said. “I’m so fortunate to have a job like this that everything I do 24/7/365 are things that I love and are passions of mine.”

Daisy embraces the pressure of making important calls when games matter most. After the Stanley Cup is awarded, he also cherishes quiet time out in the open. Being on water — frozen and otherwise — is Daisy’s comfort zone.

“When I’m on the boat and with my closest friends and with my family members, I just feel beyond relaxed,” he said. “I don’t feel like any eyes are on me. No one’s judging me, and I’m not being picked apart and I can just really kind of sit back and relax and not even think about hockey.”

The Boston-area native, who now lives with his wife in Montreal, already has worked more than 400 regular-season and playoff games since being promoted to a full-time linesman. Listening to music and podcasts while working out helps relieve stress, though Daisy has gotten better about leaving his hotel on the road to explore cities.

Daisy says he can remember the biggest call he blew in his career. It was the first round of the ECHL playoffs, and he and the two referees missed a match penalty, with the player who should've been ejected scoring the tying goal.

“I got back in the car that night and thought I was going to have to sell my equipment on eBay the next morning,” Daisy recalled. “You never want to be put in that situation. And that’s why I think at this level, it’s bringing your best every single night. It’s not easy to do.”

It's not easy to make big calls in the Cup final, which Daisy worked last season for the first time when Colorado beat Tampa Bay. He acknowledged he has still never come off the ice thinking he worked a perfect game, and he takes pride in reviewing his performances much like a player.

And much like a player, he's happy to get away from the game when he's off the clock. Hiking with his wife is another outlet that gets Daisy away from his job.

“It’s just her and I out in nature, and it’s our own timeline,” Daisy said. “It’s kind of like our own rulebook. ... There’s no real rules, and it’s a lot of freedom.”