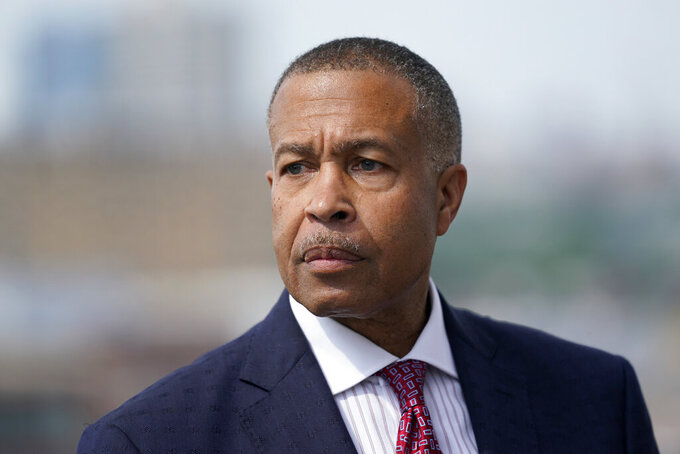 Paul Sancya, ASSOCIATED PRESS
FILE - James Craig, a former Detroit police chief, announces he is a Republican candidate for governor of Michigan, on Sept. 14, 2021, in Detroit. Two leading contenders for the GOP nomination for Michigan governor could be ruled ineligible for the primary ballot on Thursday, after the state's elections bureau said they didn't file enough valid petition signatures to qualify for the August contest. (AP Photo/Paul Sancya, File)

DETROIT (AP) — A judge declined to put a former Detroit police chief on the Republican ballot for Michigan governor, the third candidate to lose a court challenge after election staff said campaign petitions were marred by fraudulent signatures.

It's a remarkable setback for James Craig, who has high name recognition in southeastern Michigan and retired as Detroit's top cop last year to make his first run for office.

Court of Claims Judge Elizabeth Gleicher said she must abide by a Michigan appeals court decision released Wednesday that kept two other Republicans, Perry Johnson and Michael Markey, off the Aug. 2 ballot.

There appears to be no dispute that fraudulent signatures were turned in by paid circulators, though there’s no evidence that the candidates were aware of the scam. In a court filing, attorneys representing the Board of State Canvassers called it an “unprecedented situation.”

The candidates were declared ineligible last week as the result of a tie vote by the board. State election staff said Johnson, Craig, Markey, Donna Brandenburg and Michael Brown didn’t meet the 15,000-signature threshold because of fraudulent signatures.

In Craig's case, election staff said he appeared to have only about 10,200 valid signatures after subtracting 9,879.

He argued that the state had an obligation to go line by line, comparing signatures to the eligible voter file before striking them. Only 20% of the suspicious signatures were formally checked.

But the appeals court said that wasn't necessary.

“The voters should be deciding who their candidates are, not an unelected board of government bureaucrats,” he said of the Board of State Canvassers, adding, “Our fight is not over.”

The Michigan Supreme Court is the last hope for the candidates. Timing is crucial: The state said it needs to complete the ballot by Friday.

Five other Republican candidates have landed a ballot spot, including Tudor Dixon, a former conservative TV news host who has the backing of Betsy DeVos who was head of the U.S. Education Department during the Trump administration.

Kevin Rinke, a former owner of Detroit-area car dealerships, said he's prepared to spend at least $10 million of his own money. He has promoted himself in TV and digital ads.

The winner will face Democratic Gov. Gretchen Whitmer in the fall.