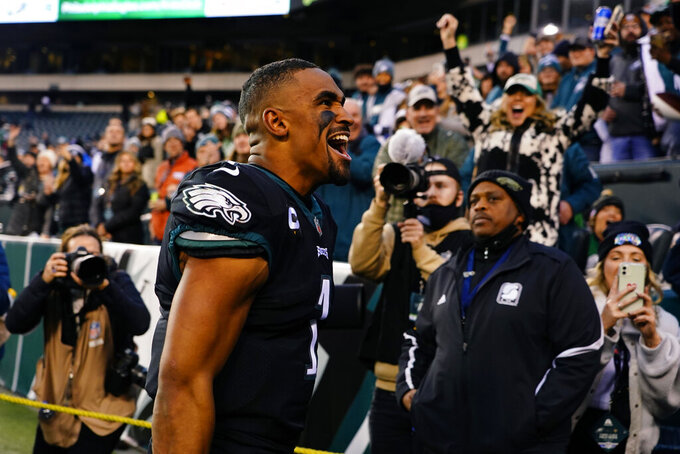 PHILADELPHIA (AP) — Smash-mouth football is the winning formula for the Philadelphia Eagles.

The Eagles (5-6) have turned around their season by turning to the run and riding quarterback Jalen Hurts’ legs. Hurts ran for three scores and had 69 of Philadelphia’s 242 yards rushing in a 40-29 victory over the New Orleans Saints on Sunday.

Unfazed by the Saints’ top-ranked run defense, which entered the game allowing just 72.9 yards rushing per game, the Eagles again relied on their offensive line to take control. They have 870 yards rushing in the past four games, including 200-plus yards in their three victories during that span.

“We’re going to continue to attack, continue to play our game,” Hurts said. “I think identity is not ‘we’re a running team,’ ‘we’re a passing team,’ or ‘we’re a team that doesn’t give up big explosive plays.’ That’s not what identity is. Identity is a mentality, it’s an approach, it’s the detail you put in day in and day out throughout the week. It’s being physical, it’s wanting it, it’s effort. It’s all of those things.

Miles Sanders returned after missing three games with an ankle injury and led the way against the Saints with 94 yards rushing. Jordan Howard had 63 before injuring his knee.

Philadelphia’s rushing attack starts with Hurts, though. His dual-threat ability makes the offense tough to defend similar to the Baltimore Ravens with Lamar Jackson.

“Jalen is a special player who forces defenses to play different,” rookie coach Nick Sirianni said. “We know we have been running the ball well and it’s a little different when Jalen is in there. ... You want to make them stop what you do well first and that’s definitely what our goal was going out there.”

The rushing attack is thriving and there’s no reason why the Eagles can’t continue to have success on the ground after dominating the league’s best run defense.

Sanders needs to secure the ball better. He lost a fumble inside the Eagles 10 and lost another one later, but he had been whistled down.

Cornerback Darius Slay returned an interception 51 yards for his third touchdown in four games. He has two fumble returns for scores. Slay was targeted just three times, allowing one catch for 9 yards.

Wide receiver Jalen Reagor had one catch for minus-1 yard. The 2020 first-round pick has only four receptions for 5 yards over the past four games.

Slay is in concussion protocol. ... Howard is expected to miss at least one game. ... LB Davion Taylor is likely headed to injured reserve with a knee injury.

5 — The Eagles have scored at least 30 points five times this season, including two 40-plus games.

The Eagles visit the Giants on Sunday. New York has a shorter week after playing in Tampa Bay on Monday night.