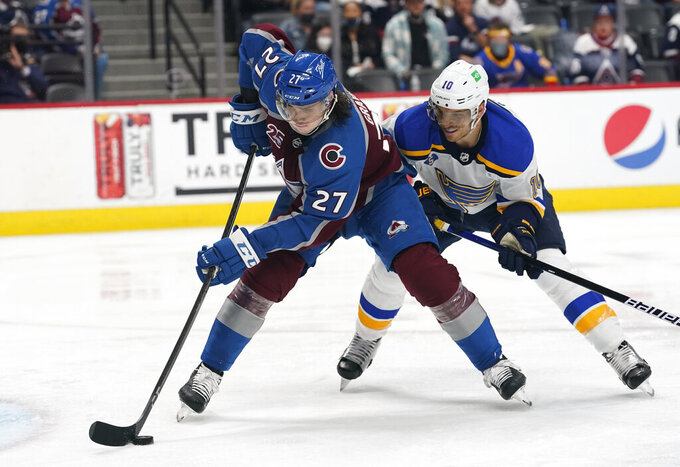 David Zalubowski, ASSOCIATED PRESS
FILE - In this May 19, 2021, file photo, Colorado Avalanche defenseman Ryan Graves (27) works with the puck in front of St. Louis Blues center Brayden Schenn (10) during Game 2 of an NHL hockey Stanley Cup first-round playoff series in Denver. The Avalanche sent Graves to the New Jersey Devils in a move made with an eye on the upcoming expansion draft of the Seattle Kraken. In exchange, the Avalanche acquired forward Mikhail Maltsev and a second-round selection in the 2021 draft from New Jersey. (AP Photo/David Zalubowski, File)

They could never seem to agree on a price — that is, until the NHL expansion draft for the Seattle Kraken loomed on the horizon.

Teams have to put together a list of players they intend to expose in the draft to stock the new team by Saturday night. It led the two general managers to renew their discussions about the 26-year-old Graves, and they beat the deadline with a deal on Thursday night.

“I slept very well,” Fitzgerald said Friday, less than a day after he sent forward Mikhail Maltsev and a second-round pick in this year's draft to the Avalanche for the former New York Rangers draft pick.

Graves gives the Devils' coaching staff everything it was looking for to help a so-so back line. Coach Lindy Ruff wanted to be bigger, more mobile and harder to play against.

Graves checks all the boxes for the Devils, who have made the playoffs once since going to the Stanley Cup Final in 2012. He is 6-foot-5 and 220 pounds. The Canadian was a frequent playing partner with the Avalanche's Cale Makarand and led the team in blocked shots with 91 and was second in hits with 77. He also has a lot of playoff experience.

“That’s important to what we’re trying to do,” Fitzgerald said. “You can’t just, we’re not just going to get up and start running and sprinting to the playoffs. We have to continue to walk and slow jog. And acquiring players like this helps us because their own experience, I think it’s very important.”

The Devils have one of the youngest rosters in the NHL, featuring centers Jack Hughes and Nico Hischier and defenseman Ty Smith, who had an outstanding rookie season.

The core of the defense is led by P.K. Subban, Damon Severson and Jonas Siegenthaler, who was acquired from Washington last season.

Graves isn't familiar with most of his new teammates, but he is looking forward to playing for a young team seemingly on the rise. He said during an online news conference it will be hard leaving his friends behind, but he knew that his future with the Avs might be affected by the expansion draft because of the team's depth.

“I was fortunate to be thrown into a role in Colorado that I could kind of learn and to learn to play against top guys and to play with top players as well and just kind of be able to work it out and kind of improve my game,” Graves said. “There’s still areas to improve on, working out the summer and trying to work on foot speed and to get faster and just to be even harder to play against.”

Graves had two goals and 13 assists over 54 games with the Avalanche last season. He has played in 149 NHL games in his career, with 14 goals and 32 assists.

Colorado acquired Graves from the Rangers in 2018. His plus-40 rating in 2019-20 led the league, the first time an Avalanche player accomplished the feat since Milan Hejduk and Peter Forsberg (plus-52) in 2002-03.