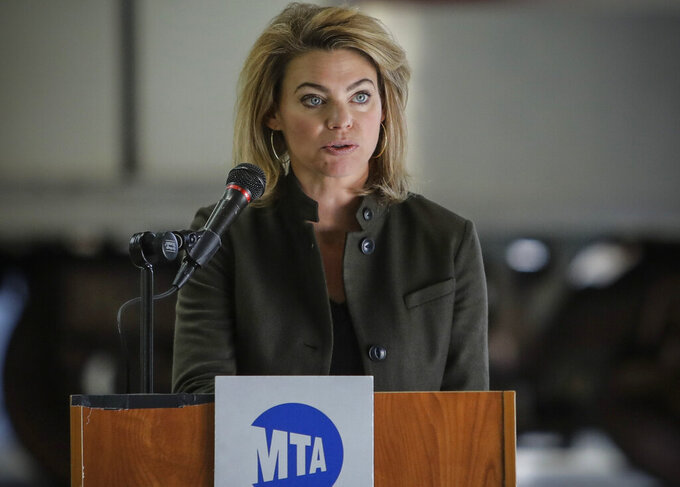 Frank Franklin II, ASSOCIATED PRESS
FILE - This photo from Tuesday May 19, 2020, shows Sarah Feinberg, Interim President, MTA New York City Transit, during a news conference in New York. Feinberg, who is stepping down from her position, said the NYC transit job has cut severely into her time with her family. (AP Photo/Frank Franklin II, File)

NEW YORK (AP) — Interim NYC Transit president Sarah Feinberg is stepping down from her position after leading the agency that runs New York City's subways and buses through the crisis brought on by the coronavirus pandemic, she told the New York Post.

But Feinberg said but she would consider serving as chair of the Metropolitan Transportation Authority if the job of MTA chair and CEO, which has been held by Patrick Foye, is split in two.

Feinberg said the NYC Transit job, which she has held on a temporary basis since February 2020, has cut severely into her time with her family.

"You are not serving New Yorkers well unless you are on call 24/7 and you are owning every rush hour, owning every signal delay and paying attention to every project, and thinking constantly about how you can make sure that customers, riders and your workforce are safe,” she said.

Feinberg told the Post that she is leaving the NYC Transit job on Friday but she would consider serving as MTA chair, a job New York Gov. Andrew Cuomo nominated her to fill last month.

Feinberg, who has a 3-year-old daughter, said the MTA chair role would allow her “to continue to serve New York … but also be able to live my life in a way that allows me to be the kind of parent and partner that I also need to be.”

Feinberg indicated she would take the MTA chair position if it's separated from the CEO job, which requires action by the state Senate. The two jobs were split from 2006 to 2009 but were merged again after a state commission called the arrangement not sufficiently independent.

On Thursday, Cuomo announced that Janno Lieber, current head of the MTA’s construction and development, will serve as acting board chair and CEO. Foye is leaving to serve as interim president and CEO of Empire State Development, the state’s economic development arm.

Feinberg and Foye led the MTA through its worst crisis in decades, as the pandemic caused subway ridership to plunge more than 90%.

NYC Transit is part of the MTA, which also runs commuter rail lines, bridges and tunnels.