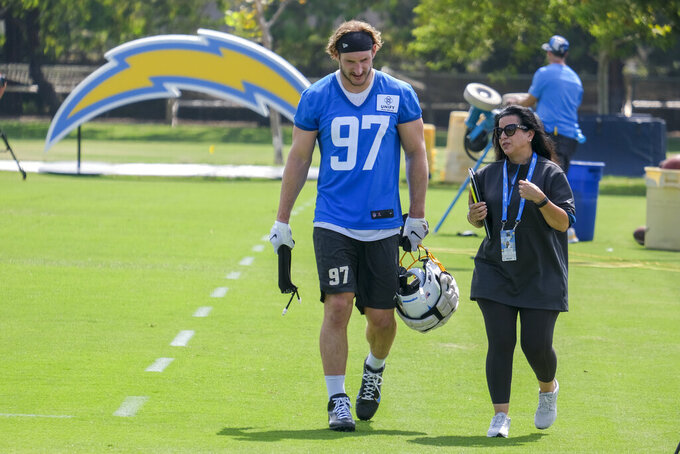 The process of trying to live up to expectations for what could be one of the league's best pass-rushing duos begins to ramp up with training camp.

Both players were getting up to speed Thursday as the Chargers had their second practice. On a defense that will likely see six new starters, the pairing of Bosa and Mack will be one of the most notable defensive stories.

“Me and Khalil, I feel like we’re definitely going to have a close bond by the end of this year,” said Bosa, who is going into this seventh season with the Bolts. “We’re kind of together all practice talking football the whole time. We have complementary styles, I think. We rush quite differently, so we can both learn a lot from each other.”

Bosa has 58 career sacks since entering the league in 2016, which is sixth over that span, and is third with 250 quarterback pressures. Mack is second with 256 pressures and seventh with 57 1/2 sacks.

Mack had six sacks in seven games with Chicago last season but was sidelined the rest of the season with a foot injury. He was traded during the offseason after the Bears changed their front office and coaching staffs.

Mack, a nine-year league veteran, has been able to go full speed the first two days after rehabbing his foot during the offseason drills and minicamp.

A benefit for Mack is that Chargers coach Brandon Staley was the linebacker coach in Chicago in 2018. So getting acclimated shouldn't take that long.

“Coming in and learning a new defense, there are some learning curves. There are some things, but ultimately it’s about playing fast and doing what we get paid to do," Mack said.

Bosa and Mack have some complementary playing styles, but the way they rush the passer is different. While most pass rushers rely on speed, then power, Bosa is the opposite. He is also one of the best pass rushers when it comes to using his hands.

Mack begins with a series of speed rushes and then uses his long arms to keep opposing offensive linemen off balance to gain an advantage.

Bosa — who had 10 1/2 sacks and a league-leading 7 1/2 strip sacks last season — said he hasn't watched much film with Mack yet, but that will change.

“I think sometimes those are the best people you can learn from because it’s a different feel and they see things that you don’t see. They use technique that maybe you haven’t learned or haven’t used before," Bosa said. "We both do similar things here and there, but we definitely have different styles and we’ve just been practicing and learning from each other. I try to teach him and the young guys as much as I can, but at the same time, I just try to watch him and learn what I can just from watching him.”

The acquisition of Mack and signing of cornerback J.C. Jackson were the major moves made by the Chargers as they try to retool a defense that was 23rd overall last season and near the bottom in key categories, including stopping the run, getting off the field on third down and points allowed in the second half and overtime.

The Chargers were 9-8 last season but defensive struggles were one reason they missed the playoffs for the third straight year.

New defensive linemen Sebastian Jones-Day and Morgan Fox have also played for Staley. Jones-Day and Fox were with the Rams in 2020 when Staley was the defensive coordinator. It's a major reason why Bosa thinks the acclimation period won't be a long one.

Before opening against the Las Vegas Raiders on Sept. 12, the Chargers offensive line will have to go against Bosa and Mack, which offensive coordinator Joe Lombardi thinks will serve his unit well in preparing for the season.