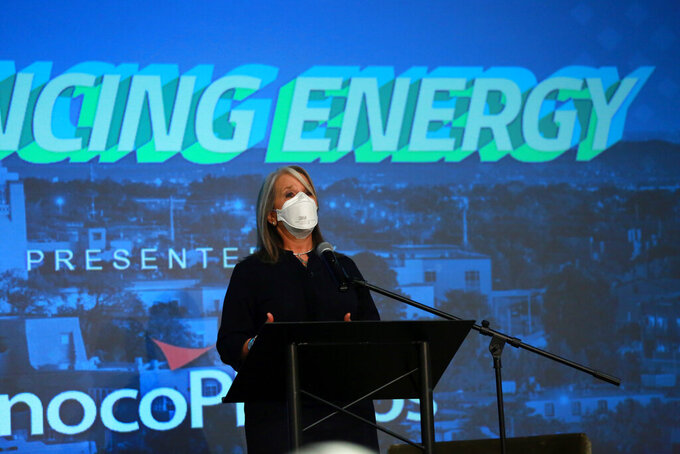 Cedar Attanasio, ASSOCIATED PRESS
Democratic Gov. Michelle Lujan Grisham addresses energy executives at the New Mexico Oil And Gas Association meeting on Monday, Oct. 4, 2021, in Santa Fe, New Mexico. Lujan Grisham has moved to crack down on pollution from gas extraction while also trying to shield the state's producers from a drilling moratorium by the Biden administration. New Mexico relies on oil and gas royalties for around one third of its budget. (AP Photo/Cedar Attanasio)

The Center on Law and Poverty on Tuesday asked a state District Court judge to intervene and order more robust services in languages such as Vietnamese, Chinese, Dari, Arabic, Swahili, Kinyarwanda, and Diné. The group warns that some foreign language speakers are likely to be missing crucial health and nutritional support that they are eligible to receive.

"Thousands of New Mexicans speak languages other than English and face systemic barriers to food and medical assistance because application documents are not provided in their language," the center said in a court filing. “This causes delays and denials of assistance for which families qualify.”

The complaint notes the pending resettlement in New Mexico of about 300 Afghans who recently fled their homeland with the withdrawal of U.S. military forces and diplomats.

The findings are disputed by the state Human Service Department, which oversees food stamps, Medicaid and emergency assistance for people living in poverty or on the cusp.

In a statement Tuesday, the agency says it already provides benefit application materials in languages other than English and Spanish and provides interpretation services to applicants who need assistance.

At the same time, the Center on Law and Poverty cites specific examples of inadequate language services that flout federal requirements, alleging that the Human Services Department unfairly turned away a Vietnamese-speaking mother of a 13-year-old son when she struggled to understand written instructions in English.