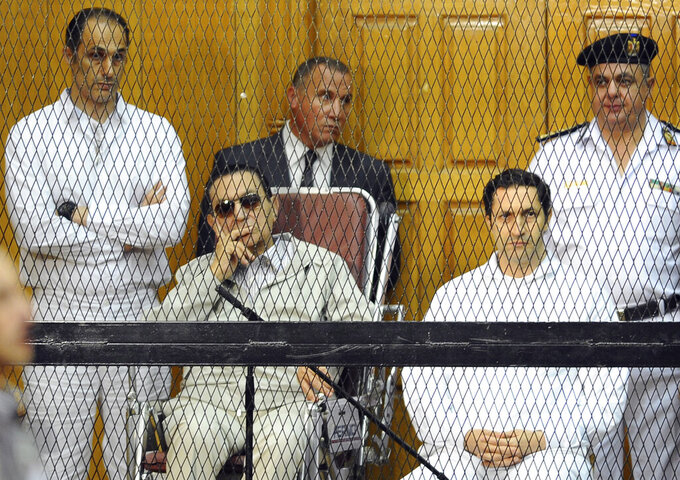 Mohammed al-Law, ASSOCIATED PRESS
FILE -Former Egyptian President Hosni Mubarak, seated center left, and his two sons, Gamal Mubarak, left, and Alaa Mubarak attend a hearing in a courtroom in Cairo, Egypt on Sept. 14, 2013. Gamal Mubarak said Tuesday, May 17, 2022, that he and family members were innocent of corruption charges made in international courts after the country’s 2011 popular uprising. His statements came after years of attempts by the deposed president's family to rehabilitate its image as it faced litigation in Egypt and abroad. (AP Photo/Mohammed al-Law, File)

CAIRO (AP) — The son of Egypt's former president said Tuesday that he and family members were innocent of corruption charges made in international courts after the country’s 2011 popular uprising, after courts last month in Switzerland and the European Union ruled in the family's favor.

The announcement by Gamal Mubarak, the son of former Egyptian president Hosni Mubarak, came after years of attempts by the deposed president's family to rehabilitate its image as it faced litigation in Egypt and abroad. In the 20-minute long video released online and titled “Mubarak family statement on the successful conclusion of all international judicial proceedings,” he portrayed the family's legal issues as resolved.

He said that the announcement was prompted by media making “false allegations of corruption” against his family, but did not explain how the family had amassed its significant wealth.

“My family has decided that we simply cannot stay silent anymore in the face of such persistent defamatory reporting. It is time that the family responds, and directly,” he said.

In February, a massive leak of Credit Suisse clients' information showed Gamal Mubarak and his brother, Alaa, to have held at least $197.5 million in the bank at one point in time.

The 2011 protests were built on calls for an end to deep-rooted embezzlement and government corruption in Egypt, and growing concerns that Gamal Mubarak would be set up to succeed his father, who was in power for nearly 30 years. The international anti-corruption group Transparency International has estimated that as president, Mubarak stole some $70 billion in public funds. The former president died in 2020, aged 91.

In April, Swiss prosecutors decided not to file charges after concluding a decade-long investigation into alleged money laundering and organized crime linked to linked to Mubarak’s circles in Egypt. They also said they would release some 400 million Swiss francs - $430 million - frozen in Swiss banks.

The same month, the General Court of the European Union ruled that the rights of Mubarak's wife, two sons and their wives had not been respected during a local Egyptian investigation of his assets, on which the prosecution was depending. The ruling meant EU sanctions on the Mubaraks' accounts were deemed unlawful, and lifted. Gamal Mubarak said his family was being reimbursed for their legal costs related to the case.

Transparency International condemned the move, saying it would show other leaders around the world that they can act with impunity.

The EU and Swiss investigations were part of a series of court proceedings against the Mubaraks in the wake of the mass protests. The father and the two sons were first detained in April 2011, two months after the uprising forced Mubarak to step down as part of the Arab Spring protest movement. A leading military council was established in his place, which then gave way to the divisive Islamist president Mohamed Morsi after elections in 2012. Morsi was later deposed by the military amid more popular protests.

Following a lengthy trial, Hosni Mubarak was acquitted of killing protesters during the 18-day uprising against his autocratic rule.

The two sons and their father were sentenced to three years in prison following their conviction of embezzling funds set aside for the restoration and maintenance of presidential palaces, using the money to upgrade their private residences. The sons were released in 2015 for time served, while Mubarak walked free in 2017. The trio paid back to the state the money they embezzled.

The sons were briefly detained in Sep. 2018 pending their trial on charges of stock market manipulation. But they were released a bail of 100,000 pounds ($5,600) each after an appeals court accepted a motion moved by their defense lawyers to remove the judge who ordered their detention, and in 2020 they were acquitted.

The video stirred controversy inside Egypt, where many pro-democracy activists expressed concern at the family's attempts to clear their name. Many pointed to the brothers' conviction by an Egyptian court in 2016 for the use of public funds to renovate their homes. They also questioned the timing of the announcement, wondering if it marked an attempt for the family's return to public life.

The video statement was released while Mubarak's sons were in the United Arab Emirates to offer condolences for the death of President Khalifa bin Zayed Al Nahyan. In videos posted online, they were seen shaking hands with Sheikh Mohammed bin Zayed Al Nahyan, now the country's new president.

The UAE and other wealthy Gulf nations were close allies to their father, Hosni Mubarak, and were critical of the U.S. and the west’s support of the uprisings that rocked the Middle East in 2011 and toppled Mubarak.