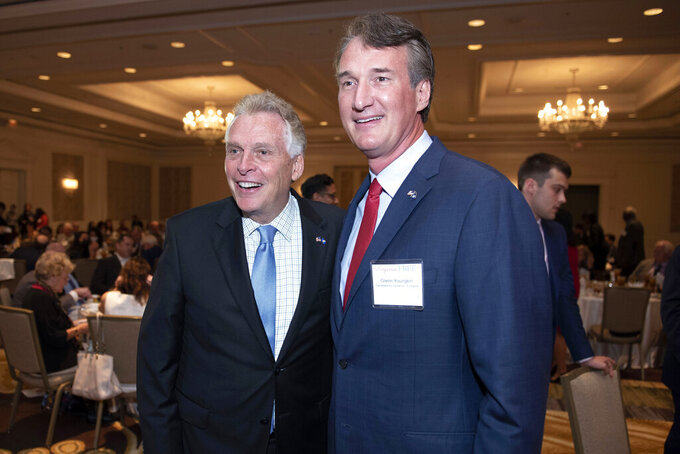 FALLS CHURCH, Va. (AP) — Virginia gubernatorial candidates Terry McAuliffe and Glenn Youngkin each raised more than $11 million in the last two months, but Youngkin loaned his campaign an additional $4.5 million to give himself a significant advantage, according to the most recent campaign-finance reports.

The $4.5 million Youngkin, a GOP businessman making his first run for office, loaned his campaign is on top of $11.2 million he had already lent.

McAuliffe and other Democrats have long expressed fears that Youngkin, who made his fortune as an executive with The Carlyle Group investment firm, will be able to use his personal wealth to give his campaign an edge.

The reports, which were due Wednesday, cover the months of July and August. McAuliffe raised $11.5 million. Youngkin raised $11.2 million, not including the $4.5 million loan.

For the election cycle, Youngkin has raised more than $35 million, while McAuliffe has raised nearly $33 million. Those amounts dwarf anything raised by Virginia gubernatorial candidates in any previous election. Youngkin's total includes the $15.7 million he has lent to his campaign.

In the most recent reports, the biggest donors to McAuliffe include $2.5 million from the Democratic Governors Association fund and $500,000 each from labor and environmental political action committees. He also received $250,000 from liberal donor George Soros, according to a review of the reports by the nonpartisan Virginia Public Access Project.

Youngkin received nearly $4 million from the Republican Governors Association fund and $250,000 from investment firm executive Thomas Saunders. He also received $12,500 from Betsy DeVos, who was education secretary in the Trump administration.

But McAuliffe enters the final two months of the campaign with an advantage in cash on hand, with $12.6 million in the bank compared to $6.0 million for Youngkin.

Early in-person voting begins Friday across the state. Virginia and New Jersey are the only two states electing governors this year, and the Virginia race is by far the most competitive. Republicans and Democrats nationally are hoping a victory will give their party momentum going into the 2022 Congressional midterm elections.