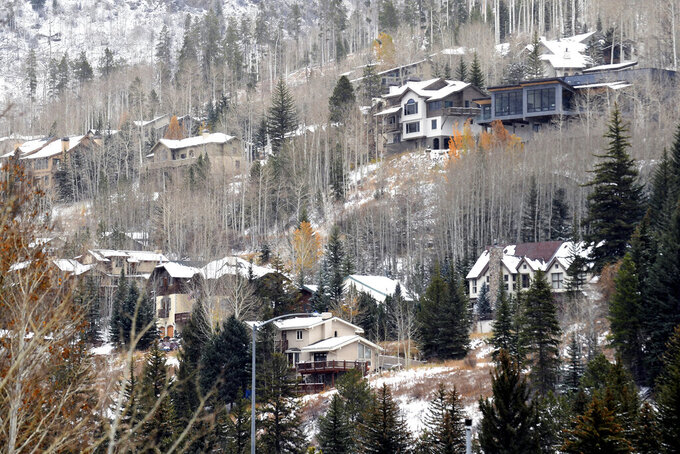 Thomas Peipert, ASSOCIATED PRESS
Houses dot a hillside in the ski resort town of Vail, Colo., on Oct. 25, 2022. A dearth of affordable housing threatens dozens of businesses that serve up food, fun and fashion for the thousands of visitors who converge on the area during ski season. (AP Photo/Thomas Peipert)

VAIL, Colo. (AP) — There's a narrow swath of sagebrush-covered hillside perched just above Interstate 70 that's home to a Colorado treasure: the bighorn sheep that graze along that steep, craggy terrain. The land could also be used to help solve a chronic problem nearby: a dearth of affordable housing that threatens the future of the renowned resort town of Vail.

Each winter, the hamlet becomes an international ski destination, serving up fun, food, fashion and sport for thousands of visitors. But similar to hundreds of communities across the U.S., the influx of visitors and newcomers — from those who come for a few days to others who buy second homes — has made housing nearly impossible to find for the workers needed to support the region's tourism.

“Someone explained to me that housing needs to be like infrastructure,” says Jenn Bruno, owner of a boutique in the heart of Vail. “We need to treat it like roads and bridges. And we need to make sure we have it, especially in a community like Vail, where we have one industry, and it’s tourism.”

Just weeks before this month's season opening at the ski resort, Bruno’s only employee was a teenager who could cover a few hours a week when her schedule permits. The restaurant across the street from her shop has been standing there, closed, for around two years now.

For more than six years, the owner of the hillside in question, the publicly traded Vail Resorts Inc., has been trying to build apartments to furnish housing for around 160 of its workers on a property called Booth Heights, named after a creek that meanders from a waterfall four miles up the steep Gore mountain range. That housing would free up other apartments in town, which, in turn, would benefit a resort oasis that is awash in money and millionaires, but lacks sufficient housing for the chefs, bus drivers, ski lift operators and cashiers who keep the community humming. But environmental concerns and some long-held skepticism about a worldwide corporation running a multimillion-dollar ski empire have created a saga filled with distrust, legal filings and no easy solution to a problem that everyone agrees is not going away.

The longstanding logjam in one of the country's iconic ski resorts offers a vivid illustration of how difficult it is for any community to come to a consensus about how to ensure people of all economic status can work and live together.

“We're at an inflection point,” said Chris Romer, the chair of Eagle County's version of the chamber of commerce. “The housing challenge and how we address it over the next 18 to 24 months will define what this community looks like in 20 to 30 years.”

Vail Resorts has long wanted to build apartments on a five-acre corner of the 23-acre parcel situated on the low point of a bighorn sheep habitat that rises out of a rocky field just east of I-70.

Opponents of the construction, including the mayor, Kim Langmaid, cite studies that show the sheep naturally migrate to what would be the construction area in winter, when vegetation higher up is covered in snow. Last month, shortly after the first big snow of the season, five sheep were, in fact, grazing down near the would-be construction area.

The story of this plot of land is intertwined with the history of Vail. It grew from the vision of Pete Seibert and Earl Eaton, two outdoorsmen who envisioned a ski area in the rugged terrain not far from an Army Alpine training center called Camp Hale. They secured $1 million in funding by luring initial investors to pay $10,000 for a condo unit and a lifetime ski pass.

As Colorado grew and the Eisenhower Tunnel on I-70 connected the state's front range to its western slope, Vail grew, not so much as a permanent home — the full-time population is only around 5,600 — but as a resort destination. Tourists love the varied terrain on the 5,300 acres of skiable mountainside, which makes it one of the biggest ski areas in the world. An estimated 1.5 million people visit every year. That includes wealthy vacationers, some of whom bought second homes.

Increasing real estate prices and the internet-driven vacation-rental market have persistently squeezed regular workers out of the center of town. In surrounding Eagle County, the median home price for a single-family home hit $1.2 million last summer.

Advocates of the project say three acres of sheep habitat is a price worth paying, especially considering that the town's largest employer is willing to foot the bill and find solutions for the sheep.

“We do need to mitigate that land and make sure we help the sheep herd,” Bruno said. “But I also don't understand why people aren't upset that in a community as wealthy as ours, with so much to offer, that we have kids sleeping in their cars, and then still helping us by getting up every day and serving us."

Robyn Smith is among the lucky few in the middle class who found what is considered affordable housing in Vail. Smith, who runs a private consulting business, and her husband, a snowcat operator on the mountain, entered a lottery for locals last year and were picked over 22 other applicants to purchase a 1,200-square-foot deed-restricted house in a 30-unit subdivision for $525,000. When another unit became available two months ago, 49 people entered the lottery for the single home.

Before the lottery, Smith and her husband were renting an apartment with a broken refrigerator for $3,200 a month and were starting to seriously contemplate abandoning life in the mountains.

The town of Vail is building other small pockets of housing around town. It also has a program, funded by a .5% sales tax increase last year, to buy up properties and put them into a limited stockpile of affordable housing.

For most workers, though, the rental market is the only choice. Last year, the “fair market rent” for a studio in Eagle County — defined as the 40th percentile of typical rentals in the area — was $1,132 a month. To find that, many are forced to travel 10 miles to the west to Edwards or Avon or, if that's not affordable, some 40 miles south on a winding mountain road to Leadville.

Another option is Minturn, about five miles west of Vail, which is where Karole Denning leases a 103-square-foot room in a dormitory-like building attached to a Mexican food restaurant. The rent recently rose from $750 to $900 a month. He commutes 10 minutes west to one job, at a radio station he runs out of the basement of a restaurant, and 20 minutes east (when the roads are clear) to another job, as a chef.

“But now Minturn's kind of turning on us, too,” Denning said. “They keep selling these spaces for these multimillion-dollar houses to be built, which is not helping any of us.”

The 160 beds Vail Resort wants to add, at a proposed cost of $17 million, are on a parcel that was long considered off-limits for development. But about eight years ago, with the housing crisis mushrooming, a town council member asked for a study of parcels that might be available for development. Surveyors dug into the archives and found that Vail Resorts owned the land.

“They went and paid the back taxes for two years, and then they announced they were going to build housing on it,” Langmaid said.

And, in fact, the town council green-lit the project. For a time, the council even helped the resort defend the construction in court against groups concerned about how the building would impact the sheep.

The project was nearly ready to start, but turnover on the town council, driven by elections that focused on the housing shortage, brought the project to a standstill. Instead of collaborating with Vail Resorts, the town council shifted, and is now trying to condemn the property. It recently offered $12 million for the land.

Vail Resorts rejected that offer with a tersely worded letter from executive vice president Bill Rock, who recalled the project initially “had broad support from the Town of Vail and was received with significant enthusiasm by the Town’s staff and its Council.”

“It has never been about the money in this project,” said Vail Mountain COO Beth Howard. “It’s always been about bringing on incremental, affordable employee housing."

One of the council members is Pete Seibert Jr., the son of the ski resort's co-founder. Seibert initially supported the project, but changed his mind and voted for condemnation, based, he said, on an analysis from a scientist who said the size of the habitat was appropriate for the number of sheep living there.

“I think we'll look back at this, 40 or 50 years down the road, and be glad we decided not to build there,” said Seibert, who also believes the large, corporate nature of Vail Resorts prevents it from truly keeping the community's best interests at heart.

The company, which is based in the suburbs of Denver and now owns 37 resorts in 15 states and three countries, insists the development would be no more disruptive to the wildlife than the 430-student school and the dozens of multimillion-dollar homes located a short walk from the construction site, all of which were built years ago on part of the sheep preserve.

The resort says no development in East Vail has gone through as thorough an environmental review as the Booth Heights project. It says high-density housing only steps away from a bus stop that provides a short ride into town is precisely what the town needs.

In trying to scuttle the project, the town offered Vail Resorts access to a 140-bed apartment building even closer to the center of town that is under construction and will be ready for occupancy next winter. The resort has not accepted that offer, saying the city should be trying to work with the resort to add as many affordable housing units as it can.

“This is a great addition. It is not a solution, but it’s an addition," Seibert said, as he walked through the construction site wearing a hard hat.

A few miles away, another possible addition, at Booth Heights, remains the way it has for decades — untouched and peaceful, save the steady stream of 18-wheelers blazing past on the interstate below.