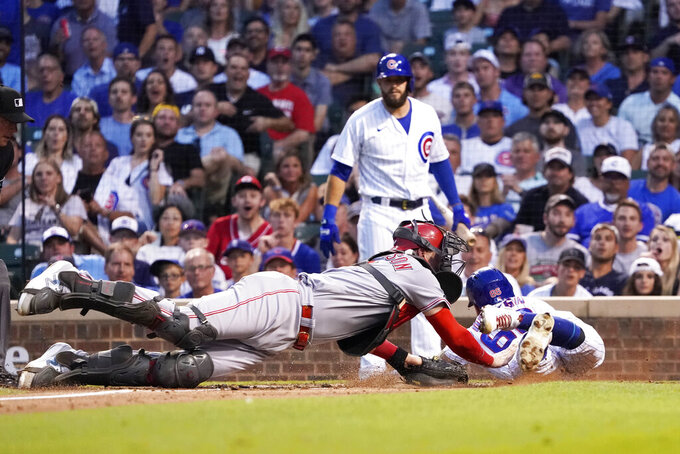 CHICAGO (AP) — Joey Votto continued his power surge with two home runs and started a dazzling double play Tuesday night as the Cincinnati Reds pulled away to a 7-4 victory over the Chicago Cubs.

Votto has homered in a career-high four consecutive games for the second time (April 2018), one game shy of the team record. Jesse Winker and Eugenio Suárez also connected as the Reds won for the third time in five games.

Anthony Rizzo, Kris Bryant and Patrick Wisdom went deep for the Cubs, who have lost six of 10.

It was Votto’s 14th career multi-homer game and first since June 29, 2017, against Milwaukee. The six-time All-Star and 2010 NL MVP has hit safely in his last five games (8 for 19) and reached base safely in 21 straight for the second-longest active streak in the majors. DJ LeMahieu of the Yankees has a 36-game on-base streak.

“I think it’s more of like, it’s about time,” Votto said. “I expect to play like this.”

Trailing 4-2 in the third, the Cubs mounted a rally before Votto ran from his first base position and reached across the tarp down the right field line to catch a foul pop by Willson Contreras, then turned and threw quickly to home plate, where catcher Tyler Stephenson tagged Rafael Ortega for the final out of the inning.

“I had to throw a strike,” Votto said. “I did not want to bounce the ball.”

After the double play, Gutierrez retired 10 of the next 12 batters before Ian Happ hit a bloop double and Wisdom drew a pinch-hit walk with one out in the seventh.

Alzolay allowed a season-high seven hits in five innings, including an RBI single by Kyle Farmer in the second.

Rizzo tied the game for the Cubs with a two-run homer in the first, marking the first time he has homered in three consecutive games since May 2019.

Bryant acknowledged the scrutiny of potentially being traded by Friday’s deadline has taken its toll on him.

“Some of this stuff is just exhausting,” said Bryant, who can become a free agent after this season. “I’m doing my best to keep my focus where it needs to be and help whoever I can here along the way. Take everything in stride. Whatever happens, it’s out of my control.”

Bryant said he would not rule out returning to the Cubs in the offseason if he’s traded by Friday.

“I’m always going to listen,” Bryant said. “Chicago is a special place to me.”

Winkler hit his 21st homer in the first off Alzolay, and Suárez hit reliever Dan Winkler’s first pitch of the sixth for a home run.

Farmer had three of the Reds’ 11 hits, including a single that sparked a two-run ninth.

Cubs SS Javier Baez was scratched from the starting lineup because of a left heel bruise, and manager David Ross is prepared to potentially lose Baez for longer because of a possible suspension.

HELP ON THE WAY

After the game, the Reds acquired relievers Luis Cessa and Justin Wilson from the New York Yankees for a player to be named.

Wilson was 1-1 with a 7.50 ERA in 21 relief outings. The 33-year-old lefty missed a combined 34 games during two stints on the injured list with left shoulder inflammation and a right hamstring strain.

Left-handed reliever Kyle Ryan and right-hander Cory Abbott were recalled from Triple-A Iowa to the Cubs. They will fill the roster spots of left-hander Andrew Chafin, who was traded to the Oakland Athletics, and reliever Keegan Thompson, who was optioned to Iowa.

The Reds sent RHP Lucas Sims on a minor league rehabilitation assignment to Triple-A Louisville. The rehab assignment of RHP Michael Feliz was transferred from Louisville to Class A Dayton. Both pitchers are recovering from right elbow sprains.

Mahle allowed two runs in five innings last time out but did not get a decision in Cincinnati’s 6-5 victory over St. Louis. Davies limited Arizona to two runs and seven hits in 5 1/3 innings of an 8-3 win Friday.