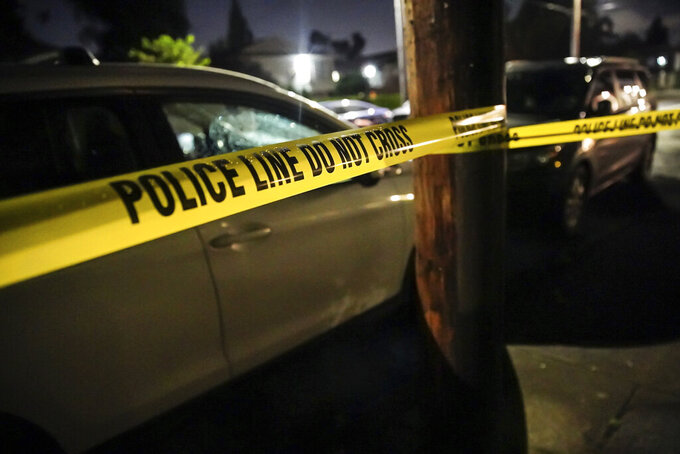 Mark Graves, ASSOCIATED PRESS
FILE - In this June 6, 2021, file photo, Portland police respond to a shooting in a house in Portland, Ore. A year after Portland's police department underwent significant budget cuts amid demands to defund the police, the city is looking to spend more than $5 million for police investments, including hiring more officers and buying body-worn cameras. (Mark Graves/The Oregonian via AP, File)

PORTLAND, Ore. (AP) — Night after night, hundreds of people marched the streets of Oregon's largest city, demanding racial justice after the murder of George Floyd by a white officer.

Among the rallying cries were “defund the police” — a call for elected officials to reallocate some law enforcement funding elsewhere. In June 2020, the Portland City Council and the mayor answered by cutting millions from the police budget.

Now, a year and a half later, officials partially restored the cut funds. On Wednesday, the Portland City Council unanimously passed a fall budget bump that included increasing the current $230 million police budget by an additional $5.2 million. The added police spending is occurring amid a year of a record number of homicides, the city's greatest police staffing shortage in decades and reform recommendations made by the U.S. Department of Justice.

“Many Portlanders no longer feel safe,” Mayor Ted Wheeler said. “And it is our duty, as leaders of this city, to take action and deliver better results within our crisis response system.”

Portland isn’t the only liberal city doing an about-face on police spending. From New York City to Los Angeles — in cities that had some of the largest Black Lives Matter protests, and some with an extensive history of police brutality — police departments are seeing their finances partially restored in response to rising homicides, an officer exodus and political pressures.

In recent mayoral elections, some winning candidates have pledged to bolster public safety budgets. In Minneapolis, where Floyd was killed, voters rejected a proposal to replace the police department with a new Department of Public Safety.

Although the three-word call to action was the jumping-off point for communities to talk about how they want to be policed, experts say the goals of “defund the police” are debatable. To some it means abolishing police departments, for others it is about cutting law enforcement budgets and to others it is about reform and accountability.

“The defund-the-police movement spearheaded an opportunity for historically disenfranchised and historically under-resourced communities to express their continued discontent with policing,” said Howard Henderson, the Center for Justice Research director at Texas Southern University.

For months, beginning in late May 2020, Portland – one of the whitest cities in America — was roiled by near-nightly Black Lives Matter protests. At the time, officials including Wheeler were criticized for what many described as an overly aggressive police force.

During the height of protests, officers reported more than 6,000 uses of force. The U.S. Department of Justice rebuked the bureau for its “abnormally high” reliance on violent tactics.

Portland police have a history of being combative. In 2014, the city and Department of Justice reached a settlement agreement following a federal investigation that found Portland officers used excessive force against people with mental illness. Some of the police spending that passed on Wednesday — including $2.7 million for body-worn cameras and hiring staff to assess the police department's crowd control tactics — were created in order to meet the Justice Department's reform requirements.

During last year's protests, Portlanders called for $50 million to be cut from the department budget, with the money going to community-driven initiatives.

The City Council responded by cutting $15 million. An additional $12 million was cut due to pandemic-caused economic shortfalls. As a result, school resource officers, transit police and a gun violence reduction team — which was found to disproportionately target Black Portland residents during traffic stops, according to an audit in March 2018 — were disbanded.

In the wake of protests, the Los Angeles City Council cut $150 million from the police budget, promising to put that money into other social services. Likewise, in New York City lawmakers approved a shift of $1 billion from policing to education and social services. At the time the NYPD budget was around $6 billion, with several billion dollars more in shared city expenses such as pensions. However, since the cut, concerns about crime led to about $200 million in restored funding.

Henderson says some of the loudest voices of the “defund” movement weren't people in neighborhoods most riddled by crime.

“The folks who live in these high-crime communities …. they don’t want to get rid of police altogether," Henderson said. "What they want to do is get rid of bad policing,”

In Portland, gun violence has disproportionately impacted communities of color. Family members of homicide victims and advocates who work with young gang members have questioned the cuts and asked for greater police presence, along with accountability and increased social services.

In the November elections, questions about when and where police are needed were at the forefront.

In Seattle, mayoral candidates who wanted to defund police stumbled. In New York City former police captain Eric Adams, who has not embraced calls to defund the police, was elected mayor.

In Minneapolis, Police Chief Medaria Arradondo has proposed a $192 million budget for 2022, which would restore funding to what it was before Floyd’s death. The proposed budget, which will be voted on in December, includes funds to replace around 300 who have quit since last year.

Similarly in Portland, the police department is 128 officers short of authorized strength. The added police spending includes signing bonuses for new officers, funding a retire-rehire program and bolstering recruitment with the goal to hire 200 additional sworn officers and 100 unarmed community safety officers by 2024 — which some advocates see as a meaningful reform win and a compromise to defunding police.

Nationally, homicides increased by nearly 30% from 2019 to 2020, based on FBI data. However, in Portland, deadly violence has increased at a faster rate than nearly all major cities, with an 83% increase in homicides in 2020.

Aaron Chalfin, a University of Pennsylvania criminologist who has studied four decades of police budgets in major cities, says 54% of the times that cities hired more officers, homicide numbers decreased. Many factors are at play in the fluctuation of crime rates, including the number of officers and police department budgets. Other factors include financial and mental health struggles caused by the pandemic, the economy, programs for young people and even the amount of street lighting.

There are "a million things that drive crime up and down,” Chalfin said.

Across the country, officials have used the “defund the police” movement to discuss policing alternatives.

Henderson said that because of “defund the police,” a valuable national conversation was started.

“At the end of the day was it the best phrase? Maybe it was? Maybe it wasn’t?” Henderson said. “But at least we’re talking about it."

Sara Cline is a corps member for The Associated Press/Report for America Statehouse News Initiative. Report for America is a nonprofit national service program that places journalists in local newsrooms to report on undercovered issues.