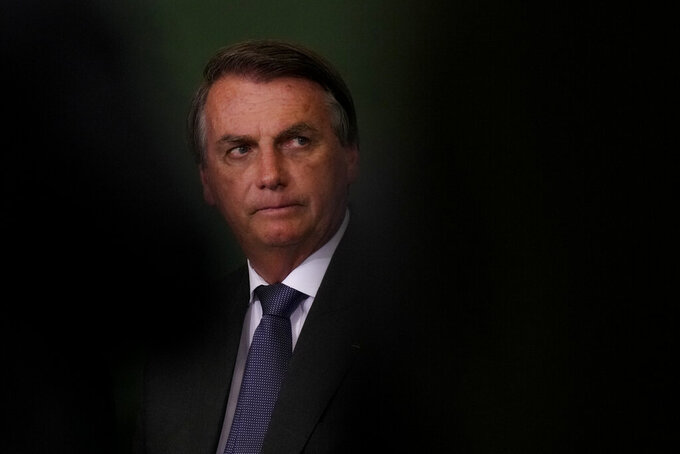 The 7-to-4 vote Tuesday by the 11-member committee ended its six-month investigation of the government’s handling of the pandemic and calls for prosecutors to put Bolsonaro on trial for charges ranging from charlatanism and inciting crime to misuse of public funds and crimes against humanity.

What lies ahead for Bolsonaro, who denies any wrongdoing:

WHAT ARE THE RECOMMENDATIONS AGAINST BOLSONARO?

The most debated of the recommended charges is of inciting an epidemic that leads to deaths. Prison time for those convicted ranges between 20 and 30 years. Gustavo Badaró, a law professor at Sao Paulo University, argues that is a “thin legal case” because Bolsonaro did not start the pandemic himself.

Bolsonaro is also accused of violating health protocols, charlatanism, falsification of private documents, irregular use of public funds, crimes against humanity, violation of social rights and breach of presidential decorum.

Badaró argues the strongest case against Bolsonaro in the final report is the accusation of delaying or refraining from action required as part of a public official’s duty for reasons of personal interest. Prison time for a conviction ranges from three months to one year, but as a sitting president that could be enough to suspend Bolsonaro from office.

Ricardo Barretto, a law professor at IDP university, says Bolsonaro's open challenge of health protocols and his defense of drugs that don't work against the coronavirus are also well substantiated. The president was repeatedly seen unmasked at gatherings that he encouraged himself. He also touted use of anti-malarial drug chloroquine as if it was a cure for the virus.

Senators had debated whether they should recommend charges of homicide and genocide against Bolsonaro, but they decided not to include those in the final report.

Brazil’s prosecutor-general, Augusto Aras, who in the past has sided with the president and is widely seen as protecting him, has to decide whether the Senate inquiry warrants him opening an investigation. He would then have to get authorization from the Supreme Court to proceed since Bolsonaro is a sitting politician.

Sen. Omar Aziz, the chairman of the Senate inquiry, said he planned to deliver the committee's recommendations to Aras on Wednesday.

If the prosecutor-general presented charges against the president, the case would move to Brazil's Chamber of Deputies, the lower house of Congress. Two-thirds of the 513 deputies would have to vote for the Supreme Court to suspend the president for at least six months and put him on trial.

Senators, however, do not expect Aras to move forward with charges against Bolsonaro.

The first is a request for an impeachment proceeding that would join more than 100 others in the files of Speaker Arthur Lira, who has stymied several attempts to remove Bolsonaro from office.

The second is to get a case against Bolsonaro at the International Criminal Court in The Hague, Netherlands, but there are no details on how or when that might occur.

WHO ELSE COULD BE CHARGED?

The Senate inquiry recommends charges against a total of 78 people and two companies.

A former health minister, Gen. Eduardo Pazuello, and his successor, Marcelo Queiroga, are also on the list, which includes four other Cabinet ministers.

The report also names Wilson Lima, governor of the state of Amazonas, and his health secretary. The Amazonas capital, Manaus, experienced severe shortages of oxygen supply at the beginning of the year, causing many COVID-19 patients to die breathless.

WHAT ARE THE POLITICAL IMPLICATIONS?

Bolsonaro faces a difficult reelection path for next October's election, and the probe is one of the reasons his popularity is at record lows. His nemesis, former President Luiz Inácio Lula da Silva, leads all polls to return to the office he held in 2003-2010.

The end of the Senate inquiry gives some relief to the president, who won't have damaging daily news on the investigation being shown on primetime television. His allies in Congress are now expected to push for reforms and new measures to deal with another trigger for Bolsonaro's unpopularity — a sharp acceleration of inflation that has added to Brazil's economic woes with high unemployment.

Barretto, the IDP law professor, says the recommendations of charges against Bolsonaro could affect his political future even more if he loses reelection.

He notes other courts and prosecutors could prosecute the far-right politician for the same alleged crimes once he was out of office, regardless of the prosecutor-general's decision. They could also pursue charges of administrative dishonesty, a crime under Brazilian law that leads to a defendant losing his political rights for a conviction.