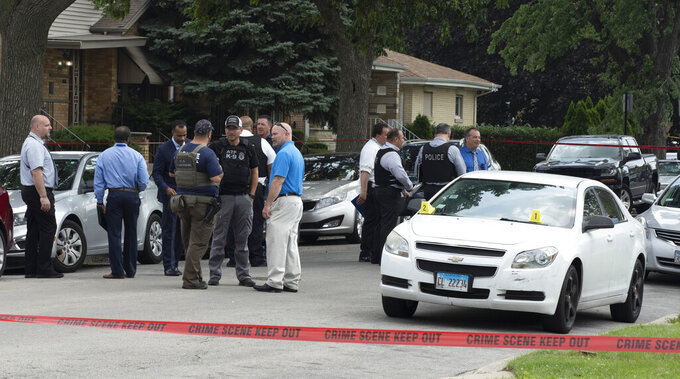 Brian Rich, ASSOCIATED PRESS
Chicago Police work on a crime scene in a residential neighborhood, Wednesday, June 7, 2021. Three undercover law enforcement officers were shot and wounded Wednesday morning while driving onto an expressway on Chicago’s South Side, and detectives were questioning a “person of interest” about the shooting, police said. The shooting occurred at 5:50 a.m. near the 22nd District police station in the city's Morgan Park neighborhood. (Brian Rich/Chicago Sun-Times via AP)

CHICAGO (AP) — A federal indictment filed Thursday charges a 28-year-old Chicago man in connection to a drive-by shooting of three undercover law enforcement officers, and it says the suspect told authorities he mistook the officers for rival gang members.

Eugene “Gen Gen” McClaurin is charged with one count of using a dangerous and deadly weapon to assault a special agent from the U.S. Bureau of Alcohol, Tobacco, Firearms, and Explosives. Charging documents accuse McClaurin of shooting the other ATF agent and a Chicago task-force officer, though the charge pertains to one agent. It is likely other charges will follow. A conviction on the one count carries a maximum 20-year prison sentence.

After his arrest Wednesday morning, McClaurin told investigators a friend had warned him rival gang members were in the area in a vehicle similar to the unmarked vehicle the two ATF agents and task-force officer were in, according to the indictment. He began following it, then pulled along side, rolled down a window and opened fire with a handgun while driving onto an expressway on Chicago’s South Side.

McClaurin “stated that he had purchased the Glock for personal protection a few months before the shooting,” the indictment says.

McClaurin appeared at an initial hearing in U.S. District Court in Chicago Thursday afternoon, where a prosecutor told a judge the government would ask for McClaurin to remain jailed as a danger to the community. A defense lawyer waived a bond hearing for now.

At a news conference at the courthouse building, Chicago police Superintendent David Brown thanked law enforcement for the quick arrest of the suspect, less than three hours after the shooting.

“We will not relent in this fight against gun violence and protecting the people of Chicago,” he said.

The shooting occurred at 5:50 a.m. Wednesday near a police station. As the suspect's car followed theirs, officers took down the license plate number. McLaurin was arrested at around 8:30 a.m. The indictment says shell casings were recovered in the car McLaurin had been driving.

After the shooting, the officers were treated for their injuries at an area hospital and released later Wednesday. The three officers were on their way to an assignment when they were shot, Chicago police Superintendent David Brown told reporters Wednesday.

The shooting came ahead of a visit to suburban Crystal Lake, Illinois, by President Biden. Chicago Mayor Lori Lightfoot said she planned to discuss gun control and the city’s violence, which has included an increase in shootings this year, with Biden.

A Justice Department spokesperson said Wednesday that Attorney General Merrick Garland was briefed on the shooting and aboard Air Force One on the president’s flight to Chicago.

When Air Force One landed, Biden spoke with Lightfoot, expressing his personal support for the officers who were shot. He reiterated his commitment to working with the mayor and leaders in Chicago in the fight against gun violence, and conveyed that the Department of Justice would soon be in touch about the strike force announced just a few weeks ago that will work with Chicago and other cities.

“I will note, in terms of efforts the president has underway to address the rise in violence we’ve seen over the last 18 months, including in Chicago, there are a number of steps that impact Chicago directly,” White House press secretary Jen Psaki told reporters before Air Force One landed.

At a news conference Wednesday, Brown declined to talk about the undercover work the officers who were shot had been doing. The indictment also didn’t provide those details.

Brown has said one of the ATF agents was shot in the hand and the other was struck in the torso. The Chicago officer was struck on the back of his head but it appeared to be “a graze wound,” he said.

The shooting come a day after police reported that 100 people were shot in Chicago — including two police officers who were wounded while trying to break up a crowd — over the long Fourth of July weekend.

With Wednesday’s shooting, 36 Chicago officers have been shot or shot at this year, Brown said.