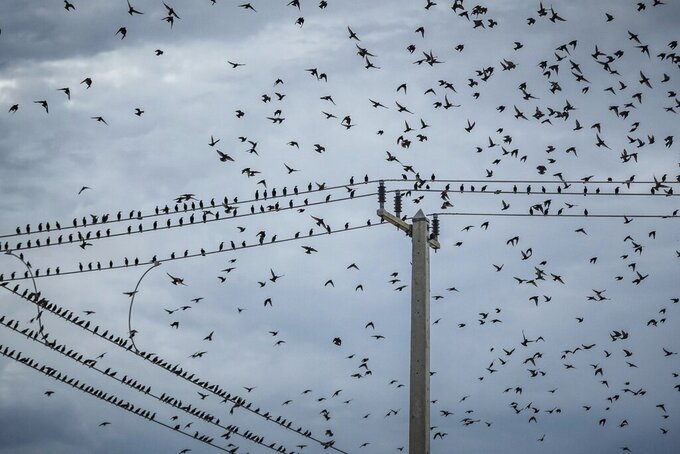 WEST PALM BEACH, Fla. (AP) — Thick chattering flocks of European starlings are a common sight in South Florida this time of year, products of a Shakespeare fan’s long-ago folly but a hint that summer’s fire will soon extinguish.

The stocky black birds, an invasive species often considered a nuisance, signal a fall migration that began in August – the commencement of an avian holiday that includes early arrivers such as black and white warblers, blue-gray gnatcatchers and belted kingfishers.

Birds identified as European starlings perch by the hundreds on powerlines near Southern Boulevard and Dixie Highway in West Palm Beach on Friday Sept. 3, 2021.

But where some of the smaller species, such as the busy gnatcatcher, may be harder to find, the starlings are aggressive extroverts, loud and pushy and proud.

“Every winter and fall we will see a big group at Okeechobee Boulevard and Jog on the powerlines,” said Benjamin Studt, public outreach program supervisor for Palm Beach County’s Environmental Resources Management department about the starlings. “It’s a sign of what is to come and what is happening now. Every birder in Florida is getting amped up right now.”

European starlings were loosed on an unsuspecting U.S. in the late 1800s by a man who wanted to introduce every bird ever mentioned in Shakespeare’s plays to the new world, according to the book Darwin Comes to Town: How the Urban Jungle Drives Evolution.

The starling was mentioned in Henry IV Part 1 when one of the king’s adversaries boasts that he will teach a starling to repeat the name of another enemy of the king and give the bird to Henry as a gift, according to the book.

But the small role was enough for an estimated 80 breeding pairs of starlings to be released in New York’s Central Park. They spread throughout the U.S., and now the United States Department of Agriculture says they destroy crops, eat feed meant for livestock, cause property damage because of feces buildup and can pose a threat to planes.

“The story of the European starling is crazy as far as how it exploded across the country,” Studt said. “The fact that they were only introduced about 130 years ago shows they have really adapted to urban life.”

Audubon Florida identified a group of birds in West Palm Beach as European starlings from a video of a flock along Dixie Highway that preached their squeaky, rasping, clicking songs to rush hour traffic earlier this month.

The Cornell Lab of Ornithology says European starlings are “short-distance” migrants with birds living anywhere north of about New York City heading south for the winter, including into northern Mexico and the Lesser Antilles.

“The flocks provide greater protection, and when the birds find food sources they can ‘tell’ the other birds when they return to the night roost,” she said.

There are also resident starling flocks that can often be confused with the common grackle, said Clive Pinnock, a birding expert and tour guide for Audubon Everglades in West Palm Beach.

Starlings are notorious for stealing other birds’ nests, and overwhelming food and water sources.

To attract more amenable migrating birds, such as colorful warblers, Pinnock suggested having fresh water available in your yard.

“They spend winters in the Caribbean and South America and travel at night,” he said. “So, they pass through, refueling themselves, before they head off on their very incredible journeys.”