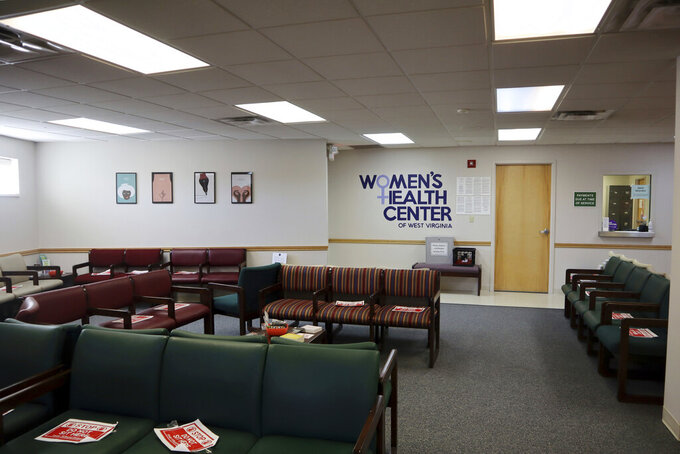 Leah Willingham, ASSOCIATED PRESS
FILE - The waiting room of the Women's Health Center of West Virginia in Charleston, W.Va., sits empty on Wednesday June 29, 2022. On Tuesday, Sept. 13, 2022, West Virginia lawmakers passed a bill outlawing abortions except for in medical emergencies and for victims of rape and incest at eight weeks for adults, and 14 weeks for children. It also requires that victims report their assault to law enforcement 48 hours before the procedure. Now, West Virginia's only abortion clinic is being forced to close after the passing of the near-total abortion ban. (AP Photo/Leah Willingham, File)

CHARLESTON, W.Va. (AP) — Republican Gov. Jim Justice on Friday signed into law a ban on abortions at all stages of pregnancy, making West Virginia the second state to enact a law prohibiting the procedure since the U.S. Supreme Court's June ruling overturning its constitutional protection.

“I said from the beginning that if WV legislators brought me a bill that protected life and included reasonable and logical exceptions I would sign it, and that’s what I did today,” he said.

The ban has exemptions for medical emergencies and for rape and incest victims until eight weeks of pregnancy for adults and 14 weeks for those under the age of 18. Victims must report their assault to law enforcement 48 hours before the procedure. Minors can report to the police or a doctor, who then must tell police.

The bill requires abortions to be performed by a physician at a hospital — a provision that at least two Republican lawmakers have said was intended to shut down abortions at the Women’s Health Center, which has provided the procedure since 1976 and was the state's sole abortion clinic. Providers who perform illegal abortions can face up to 10 years in prison.

Shortly after lawmakers passed the bill Tuesday, Women’s Health Center of West Virginia Executive Director Katie Quiñonez said the clinic’s lawyer advised them to suspend abortions immediately. Dozens of West Virginia women have already had to rebook canceled appointments at out-of-state clinics in places like Pennsylvania and Virginia, she said.

The Women's Health Center has been providing them with resources to book appointments out-of-state and funding to help cover travel and the procedure, Quiñonez said.

After Justice announced he had signed the ban, the ACLU of West Virginia released a statement on Twitter calling the ban a “forced-birth bill" and saying the governor has “snubbed the vast majority of West Virginians and sided with extremists.”

“This law is anything but pro-life. It places lifesaving healthcare out of reach for tens of thousands," the tweet said. “Our work continues.”

Indiana and West Virginia now join more than a dozen states with abortion bans, though most were approved before that Supreme Court ruling and took effect once the court threw out the constitutional right to end a pregnancy.

On Tuesday, Republican Sen. Lindsey Graham of South Carolina introduced a bill that would ban abortion nationwide after the 15th week of pregnancy, with rare exceptions, intensifying the ongoing debate inside and outside the GOP, though the proposal has almost no chance of becoming law in the Democratic-held Congress.