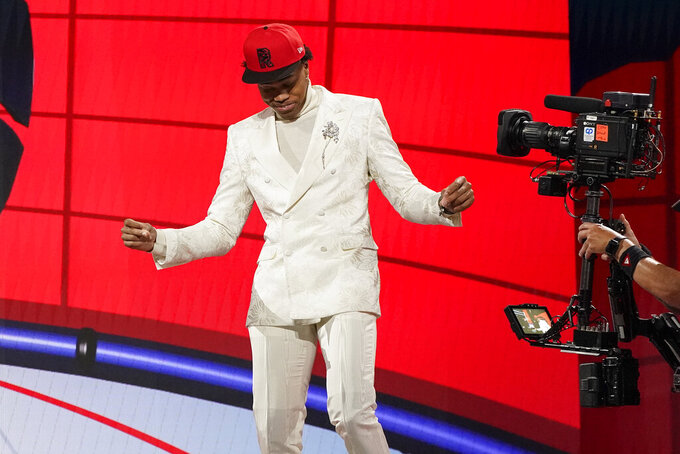 Corey Sipkin, ASSOCIATED PRESS
Scottie Barnes reacts after being selected fourth overall by the Toronto Raptors during the first round of the NBA basketball draft, Thursday, July 29, 2021, in New York. (AP Photo/Corey Sipkin)

TORONTO (AP) — Scottie Barnes hopes to achieve greatness in the NBA. The Toronto Raptors believe he’s got it in him.

The Raptors selected the 6-foot-9 Florida State forward with the fourth pick in the NBA draft Thursday night.

Boasting a nearly 7-foot-3 wingspan, Barnes is a talented, versatile defender. He’s also an unselfish player who was a double-figure scorer in Florida’s State’s balanced attack. Still, he struggled with his shooting, making 11 of 40 3-pointers (27.5%) and 62% of his free throws.

“If they feel like they need to fix something in it, I’m willing to work with them to try to fix whatever it needs,” Barnes said about letting Toronto’s coaches try to improve his stroke.

“I’m willing to do whatever it takes to try to be the best player I can be. I’m trying to achieve greatness.”

Barnes was the ACC Freshman of the Year and Sixth Man of the Year in his lone season at Florida State, averaging 10.3 points, 4.0 rebounds, and 4.1 assists.

Nurse said Barnes reminds him of current Raptors forwards Pascal Siakam and OG Anunoby, adding that he envisions the trio playing together.

“I like the looks of those three guys out on the court because all three of them can do a lot of things,” Nurse said. “That’s usually advantageous to our team.”

Dressed in a floral-patterned white suit adorned with a jeweled floral brooch, Barnes leapt to his feet and pumped a fist in celebration when NBA Commissioner Adam Silver announced the pick.

In choosing Barnes, Toronto passed on Gonzaga’s Jalen Suggs, a freshman guard viewed as a potential replacement for All-Star Kyle Lowry, who is an unrestricted free agent. Orlando chose Suggs with the fifth pick.

Still 19 years old, Barnes will be 20 on Sunday. Nurse described Barnes’ personality as “magnetic” and “high-energy.”

Barnes called himself “a natural leader.”

“I’m a guy who encourages other guys to be better,” he said. “I like seeing people be great.”

The Raptors chose point guards with consecutive picks in the second round, taking Dalano Banton from Nebraska 46th and David Johnson from Louisville 47th. Banton, from Toronto, is the first Canadian draft pick in Raptors history.