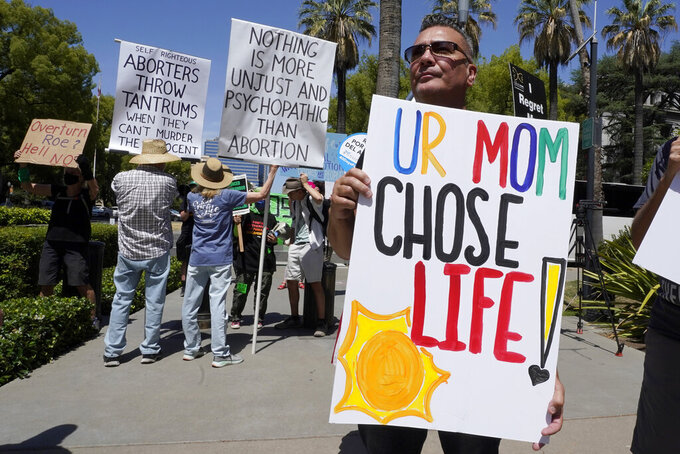 SAN FRANCISCO (AP) — Voters in heavily Democratic California on Tuesday resoundingly approved a ballot measure to enshrine the right to abortion and contraception in the state constitution.

Other states were also considering measures to regulate reproductive health after the U.S. Supreme Court overturned Roe v. Wade in June and ruled that states could decide whether to allow abortion.

Partial returns showed California's Proposition 1 leading with 68% of the vote. Ballots for the Nov. 8 election will be counted so long as they are postmarked by Tuesday and received by county elections offices within seven days.

The measure was expected to pass, with polling showing at least two-thirds of those surveyed in support. But supporters wanted a decisive win, to send a clear message that abortion is legal and accessible in California and to encourage other states to do the same.

“This overwhelming victory once again shows California’s leadership in moments of national crisis and that our values will not be compromised by a handful of conservative extremists on the U.S. Supreme Court,” Jodi Hicks, president and CEO of Planned Parenthood Affiliates of California, said in a statement.

Gov. Gavin Newsom, who coasted to re-election Tuesday, made campaign ads to back the measure and appeared at Tuesday's celebration with proposition supporters. The Democrat said he was proud that voters enshrined the right of women and girls to reproductive care.

Opponents said in a statement that they were “incredibly disappointed" by the vote and would fight any attempts to expand abortion beyond limits currently set by state law.

The California Republican Party and other opponents repeatedly said the measure contains no gestational or viability limits on abortion, meaning a fetus could be aborted late in pregnancy even though it’s capable of surviving outside the womb.

In response, the measure’s supporters said that a constitutional amendment enshrining abortion would have no bearing on limits placed on abortions by lawmakers.

California law currently permits abortion only before a fetus is viable, which is usually defined as around 24 weeks of pregnancy. Abortions in the third trimester are rare, and in California, permitted only if the mother’s life or heath is at risk.

Democrats in control of the governor’s office and Legislature hurried to put the constitutional amendment before voters, and passed other legislation to protect people seeking abortion and those providing them. Former U.S. Secretary of State Hillary Clinton visited San Francisco to highlight the proposition.