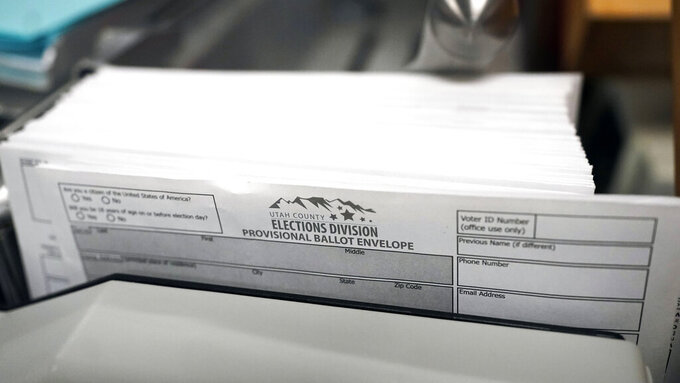 Rick Bowmer, ASSOCIATED PRESS
FILE - Utah County election division provisional ballot envelopes are viewed during a tour of Utah County's elections equipment and review processes for administering secure elections April 19, 2022, in Provo, Utah. Provisional ballots are issued to voters at a polling location when there are eligibility questions that prevent them from casting a regular ballot on Election Day. (AP Photo/Rick Bowmer, File)

Why was I given a provisional ballot?

Provisional ballots are issued to voters at a polling location when there are eligibility questions that prevent them from casting a regular ballot on Election Day.

“They are a fail-safe method to ensure that everyone who is registered to vote gets to cast a ballot,” says Charles Stewart III, director of the Massachusetts Institute of Technology’s Election Lab in Boston.

The ballots, which are sometimes known as “challenge” or “affidavit” ballots, are currently offered in all but three states — Idaho, Minnesota and New Hampshire. Those states, however, offer same-day registration, which allows residents to both register to vote and cast a ballot on Election Day.

Each state sets its own guidelines for when provisional ballots are required and how they’re processed.

The most common reasons they’re offered include when an election official challenges a voter’s eligibility or when a voter’s name isn’t found on the list of eligible voters, they lack proper identification or do not reside in the precinct in which they’re attempting to vote, according to the U.S. Election Assistance Commission, which publishes a nationwide analysis following every general election.

Provisional ballots are set aside for review after polls close on Election Day, but the delay in counting them has led to confusion and allegations of voter fraud in recent elections.

Former President Donald Trump and other election skeptics, for example, questioned why vote counts in some states continued to grow long after polls closed in 2020.

Some have also suggested that being required to fill out a provisional ballot means someone else has already fraudulently voted in your place and that your vote won’t ultimately be counted.

But all provisional ballots are reviewed by election officials in every election, says the National Conference of State Legislatures, a nonpartisan research group that serves lawmakers across the country. If a ballot is deemed legitimate, it will be counted, regardless of how wide the margin of victory in an election might be, the organization said.

Election officials are also required to inform voters whether their provisional ballot was counted and the reason if it’s rejected. This is usually in the form of a toll-free telephone number or an online tool.

As provisional ballots are verified, they’re added to the final tally, Stewart said.

“If all you do is compare the vote totals from election night to the totals with the provisional ballots added, it might look like someone has been stuffing the ballot box,” he said in an email. “Instead, people who voted on Election Day are simply having their vote counted after Election Day.”

Provisional ballots represent an increasingly small share of all votes cast, comprising less than 1% of all votes in 2020, down from 1.4% in 2016 and 1.7% in 2012, the two most recent presidential elections, according to the U.S. Election Assistance Commission's most recent analysis.

Overall, roughly 1.7 million provisional ballots were cast nationwide in 2020, of which about 78% were ultimately counted and about 21% were rejected, the commission found.

The AP is answering your questions about elections in this series. Submit them at: FactCheck@AP.org.

What happens if a ballot is damaged or improperly marked?

Can noncitizens vote in U.S. elections?