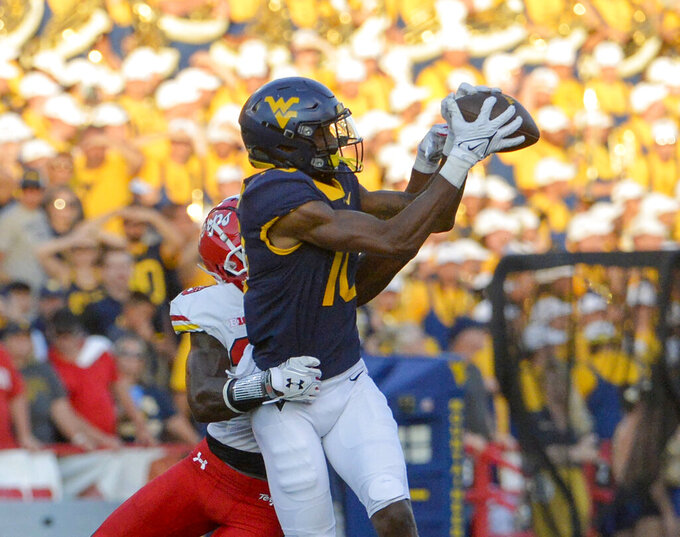 MORGANTOWN, W.Va. (AP) — West Virginia wide receiver Sam James used the offseason to focus on his own mental well-being and put a tough stretch in the past.

With a reputation for some great moments as well as mistakes, James is looking to return to the form that saw him catch 69 passes for 677 yards as a redshirt freshman in 2019.

James caught six passes for a team-high 65 yards in a 30-24 loss at Maryland last week and will try to help the Mountaineers (1-0) get back on track when they host Long Island (0-1) on Saturday.

“Just getting my feet wet, just hop back in the water and see how it is,” James said. “It was a pretty decent game.”

Notice he didn’t focus on his fumble after a catch that went out of bounds.

He’s decided not to be so hard on himself this year.

“The fumble? That happens. It’s football,” James said. “You can’t really do nothing about it.”

It’s a lesson learned from a year ago. The onset of the pandemic was hard on everyone, especially James, when the Big 12 canceled 2020 sports activities over a two-month period, including West Virginia’s spring game.

James found himself back at home in an offseason funk without the luxury of a school-based workout regimen and it set the tone for a sour regular season. His production was cut in half and his drops became more pronounced, including four in one game.

“I had a minor setback last year,” James said. “Everybody saw it. And I just had to realize that I needed to put the work in over the offseason."

What helped was taking advice from his mother, whom James calls his rock, and others including position coach Gerad Parker and some teammates.

It seems to have worked. Coach Neal Brown praised his wide receivers as a unit against Maryland before adding, “Sam James was really good.”

LIU went 0-10 in its first season in the Championship Subdivision in 2019 after moving up from Division II. The 2020 season was postponed to this past spring due to the pandemic and LIU went 2-2. Coach Bryan Collins resigned in June and interim coach Jonathan Gill had little time to prepare for fall camp.

The Sharks opened with a 48-10 loss at Florida International. Derick Eugene stood out for LIU with seven receptions for 115 yards, including a 74-yard scoring catch from Camden Orth. Orth completed 15 of 30 passes for 197 yards.

West Virginia's Winston Wright set a school record with 217 yards in kickoff returns last week. Wright's longest return a year ago was 37 yards. Brown said the blocking on kickoffs was solid last year and that Wright wasn't as explosive as he is now.

At Maryland, Wright “never stopped his feet,” Brown said. "That’s going to be a real weapon for us moving forward.”

PROGRAM, GET YOUR PROGRAM

Brown said he plans to give more players time on the field Saturday. He's hopeful backup running back Tony Mathis Jr. can play after missing the opener with an undisclosed injury. Fans also have been crowing to see mobile backup quarterback Garrett Greene, who's had one carry in a year.

West Virginia is going after its 18th straight win in a home opener and also is trying to avoid an 0-2 start to the season for the first time since 1979.

West Virginia defensive line coach Andrew Jackson holds bachelor’s and master’s degrees from LIU and was a graduate assistant coach with the Sharks in 2013.