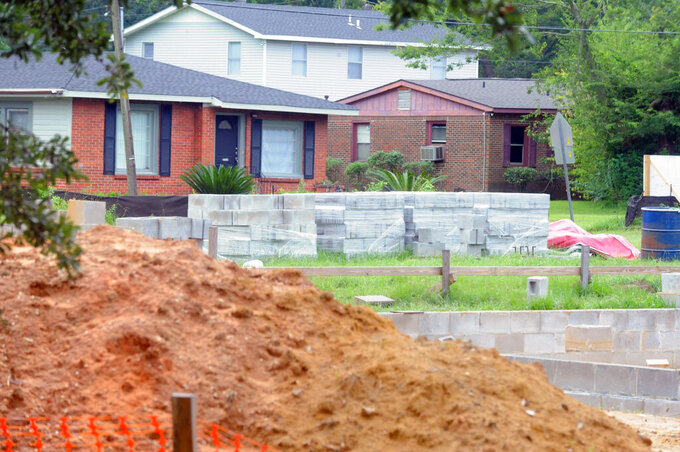 John Sharp, ASSOCIATED PRESS
This photo shows the future Africatown Heritage House Monday, Sept. 13, 2021, in the Africatown community in Mobile, Ala. Africatown’s resurrection into a potential world-class tourism destination is well-known by now as planning forges ahead for walking and water tours, a museum and welcome center, and a development corporation aimed at bringing businesses to the community founded by slaves more than 161 years ago.(John Sharp/Press-Register via AP)

MOBILE, Ala. (AP) — Africatown’s resurrection into a potential world-class tourism destination is well-known by now as planning forges ahead for walking and water tours, a museum and welcome center, and a development corporation aimed at bringing businesses to the community founded by slaves more than 161 years ago.

But bumps are expected along the way. The latest is unfolding with the second round of delays for the Africatown Heritage House, which is not scheduled to open until sometime during the first quarter of 2022.

The house is set to be transformed into the first museum in the Africatown community since the slave ship Clotilda was discovered in May 2019. The vessel is recognized as the last known ship to bring slaves to the United States.

The reason for the delay is because of the slowdown in global shipping, which pushed back the arrival of the pre-fabricated house to November. It was previously expected to arrive this month.

Earlier this year, the 5,000-square-foot structure was expected to arrive in July or August. But that timeline was pushed back in June after the contractor was delayed in getting a land disturbance permit to begin the work.

Said Ludgood, “We went the manufactured (home) route because we were trying to do it quickly. But we really would have the same thing if we (constructed the building).”

More work is required once the house arrives and is installed adjacent to the Robert Hope Community Center. A roof has to be added, and on-site landscaping needs to take place. Museum displays will also take 10-12 weeks to install inside the building.

“Most of what can be done in advance is completed: the exhibits are designed, the text is written, and the audio-visual components are in development,” said Meg Fowler, director of the History Museum of Mobile which is in charge of assembling the displays.

She added, “Actually, constructing the exhibition, however, will require us to build out false walls and other exhibit components in the gallery space and that is work which cannot begin until space is complete.”

Other tourism attractions are on hold until the Heritage House is completed. Chief among them are water tours and the showing of a 24-minute film on Africatown that was created by the Savannah College of Art and Design (SCAD).

“We feel like the tourism story needs to be in sync with the asset development over there,” said David Clark, president & CEO with Visit Mobile. “We feel like the perfect time for turning the story into an experience is when the Heritage House opens. When the Heritage House opens, we will have a really cool thing to showcase the Clotilda, Africatown story.”

Clark noted that it’s taken over 160 years to get to the point of telling the Clotilda’s story through permanent displays and through storytelling during land and water tours.

He added, “With (the Heritage House’s opening) being pushed back a little bit due to a lack of the supply chain, I feel like it’s still right around the corner. We’re super excited.”

Darron Patterson, president of the Clotilda Descendants Association, is also unconcerned over the delay. He said that construction project managers are dealing with uncertainties and are having to adjust their own timelines.

He said the extra time frame gives public officials more time to assist in “sprucing up everything” within the mostly Black and poor neighborhood ahead of the arrival of international tourists.

“We have company coming and we need to do more over there than putting up a building and saying, ‘Come on,’” said Patterson. He said that he would like to see traffic slowed along Africatown Boulevard, and that dilapidated housing needs to be demolished.

“We need to start thinking about what is happening,” Patterson said. “Company is coming. We need to be able to be sure that we are able to accept company.”

The Descendants Association is also working with a playwright on a production about the Clotilda story, though no timetable has been hashed out on the completion of a production.

The Mobile County Commission, on Monday, gave the association $28,000 for the “development of intellectual property related to the Africatown story.”

“Part of his contract is directing and doing the casting calls and he’ll do the rehearsals and the presentation,” said Ludgood. “All of this is really for the playwright’s expenses.”

Patterson said the organization has partnered with a “nationally acclaimed” playwright to craft a production that he believes will be the “beginning of introducing professional Black theater to Mobile.” He said the goal is to make the story of the Clotilda a Broadway production, similar to the success of Hamilton.

“We are trying to move into a realm that we feel will be beautiful for Mobile and we appreciate the county commission in having the faith in us to give us the money to go forward with some things,” Patterson said.

He said the money will help the association keep and maintain the Clotilda story.

“There are all kinds of charlatans out there who are even trying right now to take advantage of what is happening with the Clotilda (discovery),” said Patterson. “There are people who are coming to Africatown and seeing if there is property available to get. They have no interest in Africatown. This is something we are trying to beat back every day.”

He added, “This is not about the money. It’s about making sure the legacy of the 110 people on that ship showing the resiliency they did, that we are bound and determined to make sure that won’t die. The survival of Africatown is important. The rebirth of that community is important. Everyone has an agenda, and ours is to make sure our story lives on.”