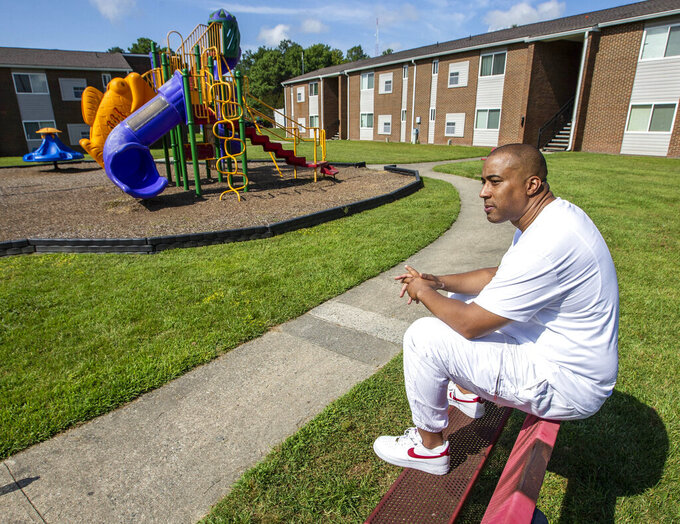 GREENSBORO, N.C. (AP) — Grass grows through cracks in the basketball court. No longer are baskets and nets attached to its backboards.

Nearby, what had been a small field for kids’ football has become part of a neatly-cut lawn around the apartment complex.

This is Trinity Gardens in the city’s northeast section, where James DuBose lived from birth through sixth grade, back in the 1960s and ’70s.

Here, he learned to play basketball and football, the latter a sport that sent him briefly to the National Football League.

Although his mother no longer lives there, DuBose often stops by when he returns to his hometown from Los Angeles to visit family and friends.

On this quiet morning in early August, he feels safe in these familiar surroundings of childhood. Longtime friend Hayward Parker joins him in the visit.

What he is now is head of programming and executive producer for Fox Soul.

It has provided him with a dream career that mixes sports, music and entertainment.

“I’m so blessed to come from where I come from, the struggles that I’ve struggled,” he said. “For God to place me here, bless me with this job, continue my career, continue to elevate me and to grow me.”

But to get there, DuBose went through another phase — dark days of depression.

He tried to hide those feelings under a facade of happiness and confidence.

“When I reached success, it didn’t feel like I thought it would,” DuBose said. “I couldn’t figure out why I wasn’t happy. People would have been extremely happy to be doing the things I was doing at the time.”

DuBose finally reached a crisis — and got help.

He wants to encourage others in similar crises not to hold it in, but to talk and get help.

“Success was the worst thing that could have happened to me at that moment, because I wasn’t prepared for it internally for myself,” DuBose said. “It brought me down.”

Now he speaks out on panels and on television about navigating his journey as a Black executive through Hollywood, the NFL and mental health.

“At first, there was a long time when I didn’t speak about it at all,” he said about battling depression. “There was a stigma around it.”

“You worry about, ‘Are they going to think I’m crazy in the business? Am I going to be able to sell content?’” he said. “As a Black man or woman in Hollywood, there are not a lot of people who look like us at the top.”

“You hear more now that a lot of people are opening up about it, especially in the Black community,” he said.

Now, he said, “I try to be as transparent and truthful as possible, because I want someone else to be able to learn and feel comfortable in opening up.”

Mary Ann DuBose worked at AMP while raising her son as a single parent. He had a good relationship with his father, also named James, but longed for it to become stronger.

“You don’t understand some of the decisions they are making, until you get your own (kids),” James DuBose said. “I didn’t truly appreciate everything my mother was doing for me. As I got older and went through my own trials and tribulations, I realized how much she did for me.”

After he finished sixth grade, his mother moved them beyond city limits, to The Orchard neighborhood.

He still praises “great coaches, great friends, everything you could ask for.”

That feeling of disconnect would haunt him.

“I think leaving this place just did something to me,” he said, as he looked at Trinity Gardens apartments surrounding him. “I never realized it until I got much older and had to go through a lot of ups and downs. I couldn’t figure out why I just felt disconnected.”

He attended Wake Forest University on a football scholarship.

“They had a communications program,” he said, “and I always knew I wanted to be in entertainment.”

A football injury prevented DuBose from playing much during his senior year. After he finished his degree, the Detroit Lions signed him as a free agent.

There he met famous running back Barry Sanders, even getting baptized in Sanders’ bathtub.

The Lions released DuBose in 1990, before the start of the season. After a brief stint with the new World Football League, he headed for Los Angeles.

He started as a production assistant. “I don’t know why people saw something in me,” he said.

In 2006, he took a leap of faith and started DuBose Entertainment.

He served as executive producer on projects with celebrities such as Michael Vick and Trey Songz.

He created “Keyshia Cole: The Way It Is” with the R&B singer. It became one of the most-watched programs in BET history.

At one point, DuBose recalls, his company had 65 employees and five programs airing on BET.

“That was a moment when everyone knew my name,” DuBose said.

He started a record label, a sports agency, “different businesses I had no business starting,” he said. “I was just spending money to try to find my happiness and peace, and I couldn’t.”

“I had a business manager at the time who said, ‘James, you’ve got to stop. You can’t afford this.’ I couldn’t tell him, ‘If I stop trying, I’m going to literally die.’”

“But I didn’t feel like I could speak to anyone,” he added. “I spent most of my time trying to hide my pain. Because that’s how we were made, especially as Black men. You don’t speak about it... At some point, it catches up to you.”

Early one morning, he drove to a hospital parking lot, armed with a gun.

“I was going to go kill myself at this place, be close to the hospital, away from my family so it wouldn’t affect them,” he recalled. “I was crying and had the gun to my head. Something in me told me to go inside the hospital because I started having major, major chest pains.”

Witnesses called police, who took the gun from DuBose. He spent a few days in the hospital, then in a psychiatric ward.

“That was the beginning of me just letting go and saying, ‘I need help,’” DuBose said.

Money, family and many friends went away.

“So when I said there’s a lot of collateral damage, there was,” DuBose said, “and I have to live with that for the rest of my life.”

Parker, his longtime friend, still lived in Greensboro but worked for DuBose Entertainment.

At first, Parker said, he didn’t realize what was happening with his friend.

“He finally admitted that he was going through a lot of different stuff,” Parker said. “We just talked and prayed about it. It’s what friends do to help each other when we’re down.”

In October 2013, former BET president and friend Loretha Jones paid for him to spend six weeks in PCH treatment center, he said.

For a year, DuBose said, he pretended he was much better.

“The hard part about that is when you finally have to look in the mirror and admit to yourself that you can’t point the finger at no one else but you,” DuBose said.

DuBose longed to strengthen his relationship with his father. As that began to happen, his father died on March 8, 2014.

He no longer takes medication for depression. But he still attends monthly therapy sessions.

His daughters from a previous marriage, ages 23 and 19, work for him at Fox Soul.

He and his partner and confidante of six years — “my peace,” he calls her — have two young sons.

In 2018, he worked as executive producer on a Fox show out of Atlanta, “This Nation.” That led to his current post in LA.

“You need to wake up every day and the first thing you need to work on is You Incorporated,” he tells others. “Then everything else will start to flow from there.”

And he likes to visit his hometown, where he hugs his mother and visits Trinity Gardens.

Last month, he was among those honored in Atlanta as an African American trailblazer in media.

He recently returned to his hometown from LA to console Parker, who had recently lost two close relatives.

“When a friend is in pain, that’s just what we do,” DuBose said. “I know first-hand there is no better feeling than to have someone show up in your darkest times.”