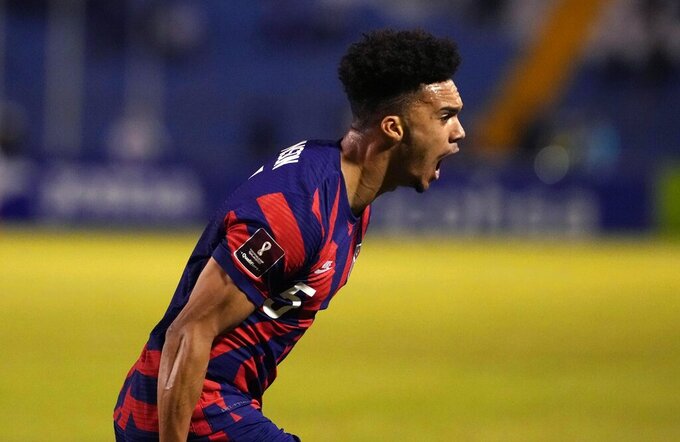 AUSTIN, Texas (AP) — Antonee Robinson gave himself the nickname Jedi as a kid, and he followed the goal that sparked the United States’ comeback against Honduras with a backflip that would have fit into a “Star Wars” duel.

“It’s a celebration I’ve been wanting to do for a while, to be honest,” he recalled Tuesday. “The emotions kind of took over me. It was my first goal for the national team. It was in such a big moment. It was just kind of the first thing that came to mind, to celebrate in a way that was something I used to do as a kid.”

A 24-year-old defender for Fulham in England, Robinson could solve a long-time problem position for the U.S. national team, which has struggled for decades to find a top left back. After opening World Cup qualifying with a 0-0 draw at El Salvador, a 1-1 tie at home against Canada and a 4-1 come-from-behind win at Honduras, the Americans host Jamaica on Thursday night in the first of three more qualifiers in a seven-day span.

Robinson started the middle match last month after entering the opener in the 64th minute when Sergiño Dest scuffled on the left. The Americans fell behind at Honduras when coach Gregg Berhalter opened with a 3-4-3 formation that had George Bello at left wingback and Tyler Adams — usually a central midfielder — at right wingback. Robinson was among three changes at the start of the second half as the U.S. reverted to a 4-3-3.

Robinson tied the score with a right-footed volley from 8 yards from a Ricardo Pepi backheel pass.

“I talked with him, and it wasn’t an easy conversation,” Berhalter said. “I explained to him that he’s going to come in and make an impact off the bench. We wanted George to start the game. I thought he had an outstanding game against Canada. But I talked to him about his role in this game and how we’re going to bring him in to make an impact, and he did.”

Robinson was raised in Liverpool, which his accent quickly reveals. His father, Marlon, was born in England, grew up in White Plains, New York, and was on Duke’s soccer team from 1981-84.

Antonee joined Everton’s youth academy when he was 11, his development slowed by a broken left knee patella in 2014 and right knee microfracture surgery in 2015.

On loan to Bolton, he made his professional debut in the League Cup on Aug. 9, 2017. He transferred to Fulham for 2020-21, making his Premier League debut and playing alongside American central defender Tim Ream. He impressed in his first U.S. appearance, against Bolivia in May 2018, setting up Tim Weah's goal on a night Josh Sargent also debuted.

Berhalter used 22 players in the first three qualifiers, including 21 who got starts. Only Adams and central defender Miles Robinson among the outfield players were on the field for every minute.

It’s not yet clear whether Robinson can travel to Panama for Sunday’s game or will be blocked by British government travel restrictions that would require a quarantine when returning to England. The U.S. player pool at left back is not deep — Dest has been better on the right, Sam Vines isn’t in camp and Berhalter has said it’s too soon to call in Joe Scally, an 18-year-old who has been shifted to the left side and played 90 minutes in all seven Bundesliga matches this season for Borussia Mönchengladbach.

“We have a deep enough squad to rotate guys, to get guys on the field without a drop-off in quality,” midfielder Cristian Roldan said. “We got to embrace the challenge. We have to embrace the travel conditions, the short rest and get on with it.”

Robinson scored his first Fulham goal against Birmingham in the League Cup on Aug. 24. The Cottagers wound up getting relegated last season, and Robinson found himself on a team battling for promotion — Fulham is fifth after 11 matches — rather than scrapping to avoid relegation.

“It is definitely a shift in mentality,” he said. “The expectations on us, with the squad we have, are obviously to go straight back up. ... It’s a nice feeling going into a game, feeling that everyone’s confident that we can win. And it’s a similar token here when we come to the States, it’s we’re expected to qualify, we’re expected to be one of the better teams. At the same time, I feel like they’re the games that motivate all the other teams. All the other CONCACAF teams that are qualifying with us right now, they’re going to be looking at games against us and thinking: ‘This is our moment to prove what a good team we are.’”

After playing the Reggae Boyz in Auston, the U.S. is at Panama on Sunday, then meets Costa Rica on Oct. 13 at Columbus, Ohio.