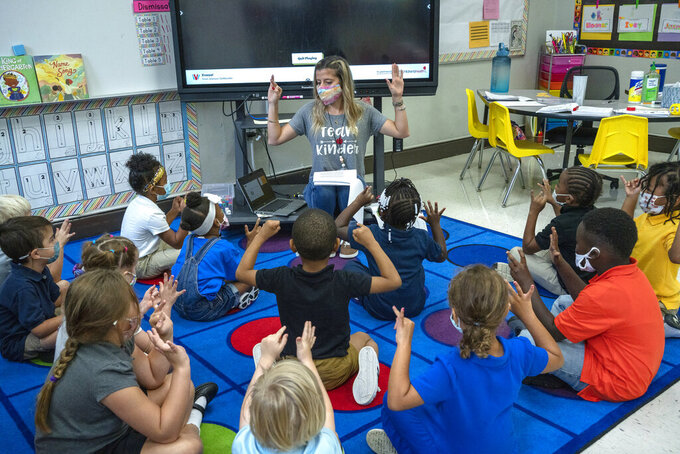 NASHVILLE, Tenn. (AP) — A Tennessee school district can continue requiring students to wear masks in school after a federal judge on Friday extended a ruling blocking an opt out provision, The Tennessean reported.

The ruling comes in a lawsuit brought by the families of two children with disabilities who attend Williamson County schools. They claim Gov. Bill Lee's executive order allowing parents to opt their children out of school mask mandates puts their children at risk and violates their educational rights.

In the Friday opinion, U.S. District Judge Waverly Crenshaw found that “disabled students are at a significantly higher risk for severe infection and are exposed at a higher rate following” following Lee’s executive order. He called that “an irreparable harm" that justifies continuing to block the order.

“The record before the Court establishes that temporary universal mask mandates adopted by the Williamson County and Franklin school systems have been, and likely would continue to be, effective in curbing the spread of COVID-19,” Crenshaw wrote. “Executive Order No. 84 violates federal law and must yield."

The ruling mirrors those by federal judges in Memphis and Knoxville, where Lee’s order is also blocked. As a result, school districts in Shelby, Williamson and Knox counties can continue to enforce universal mask policies. The rulings don’t apply to other schools systems in the state.

Lee has encouraged people to voluntarily send their children to school wearing masks to help reduce the spread of COVID-19 but says parents should decide what is best for their children. He has vowed to continue fighting in court, and the state attorney general has appealed the decisions in Memphis and Knoxville.

Lee first issued the executive order in August and has extended it several times. The current order runs through Nov. 5.

Meanwhile, the U.S. Education Department has opened civil rights investigations into Tennessee and four other Republican-led states that have banned or limited mask requirements in schools. The Department says the policies could amount to discrimination against students with disabilities or health conditions.

Masks are a key virus-prevention tool that are most effective when worn by a large number of people, public health experts say. The Centers for Disease Control and Prevention has recommended them for schools, saying they don’t pose health risks for children older than toddler age.

For answers to common questions about COVID, read the AP’s Viral Questions series at https://apnews.com/hub/viral-questions.