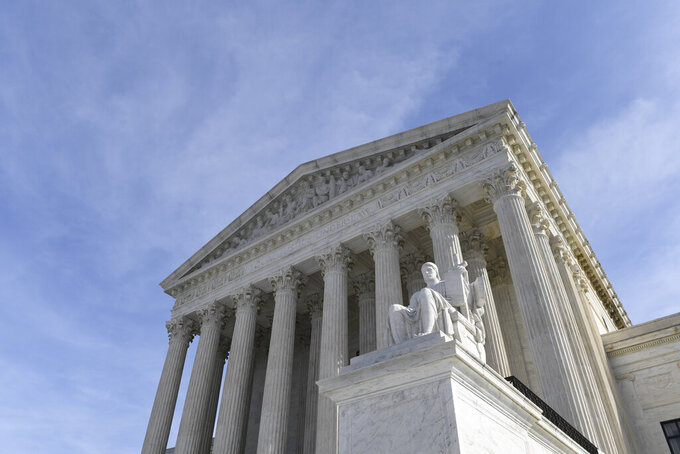 Susan Walsh, ASSOCIATED PRESS
FILE - In this Nov. 11, 2019, file photo, a view of the Supreme Court in Washington. The Supreme Court appears ready to prevent thousands of people living in the U.S. for humanitarian reasons from applying to become permanent residents. The justices seemed favorable to arguments made by the Biden administration on April 19, 2021, that federal immigration law prohibits people who entered the country illegally and now have Temporary Protected Status from seeking “green cards” to remain in the country permanently. (AP Photo/Susan Walsh, File)

WASHINGTON (AP) — The Supreme Court appeared ready Monday to prevent thousands of people living in the U.S. for humanitarian reasons from applying to become permanent residents.

The justices seemed favorable, in arguments via telephone, to the case made by the Biden administration that federal immigration law prohibits people who entered the country illegally and now have Temporary Protected Status from seeking “green cards” to remain in the country permanently.

The designation applies to people who come from countries ravaged by war or disaster, protects them from deportation and allows them to work legally.

The case pits the administration against immigrant groups that contend federal law is more forgiving for the 400,000 people who are TPS recipients. Many have lived in the U.S. for many years, given birth to American citizens and have put down roots in this country, their advocates say.

The Justice Department says it is maintaining a position held consistently for 30 years by administrations of both parties.

President Joe Biden supports changing the law to put TPS recipients, among other immigrants, on a path to citizenship. Legislation that would allow people who are here for humanitarian reasons to adjust their immigration status has passed the House, but faces uncertain prospects in the Senate.

Justice Brett Kavanaugh said the court should be “careful about tinkering with the immigration statutes as written,” especially when Congress could act. “But just kind of big picture, why should we jump in here when Congress is very focused on immigration?” Kavanaugh asked.

The case turns on whether people who entered the country illegally and were given humanitarian protections were ever “admitted” into the United States under immigration law.

Justice Clarence Thomas said “they clearly were not admitted at the borders. So is that a fiction? Is it metaphysical? What is it? I don’t know.”

The case before the court involves a couple from El Salvador who have been in the country since the late 1990s. In 2001, the U.S. gave Salvadoran migrants legal protection to remain in the U.S. after a series of earthquakes in their home country.