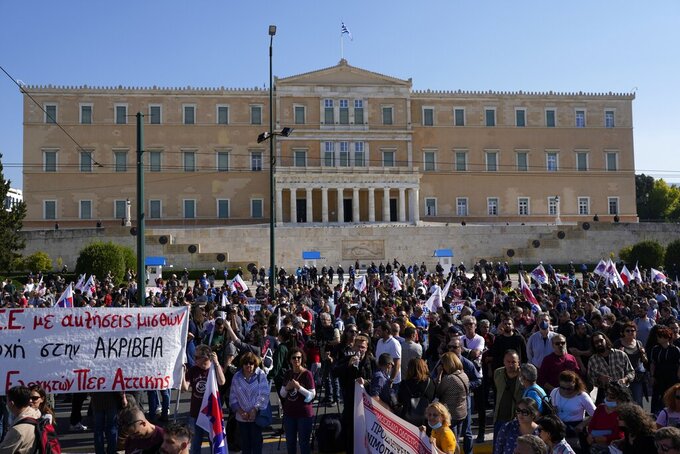 Petros Giannakouris, ASSOCIATED PRESS
Protesters from the communist party-affiliated PAME union, gather during a rally outside the Greek Parliament during a 24-hour strike in Athens, Greece, Wednesday, Nov. 9, 2022. Public and some private sector workers walked off the job in Greece Wednesday during a 24-hour nationwide strike against price hikes that was disrupting services and transport around the country. (AP Photo/Petros Giannakouris)

ATHENS, Greece (AP) — Workers walked off the job in Greece and Belgium on Wednesday during nationwide strikes against increasing consumer prices, disrupting transportation, forcing flight cancellations and shutting down public services in the latest European protests over the rising cost of living.

In Greece, where workers were holding a 24-hour general strike, thousands of protesters marched through the streets of Athens and the northern city of Thessaloniki. Brief clashes broke out at the end of demonstrations in both cities, with small groups of protesters breaking off from the main march to throw Molotov cocktails and rocks at police, who responded with tear gas and stun grenades.

The clashes were over within minutes. Police said one officer was injured in Athens, while two people were arrested in the capital and another eight arrested in Thessaloniki.

The strike disrupted services around the country, with ferries tied up in port, severing connections to Greece's islands, state-run schools shut, public hospitals running with reduced staff and most public transport grinding to a standstill.

Belgium's nationwide strike over cost-of-living increases snarled traffic through much of the country and disrupted businesses as workers set up picket lines at supermarkets and shopping centers.

As the country's main trade unions called for wage increases, the action led most trains and public urban traffic to be reduced to a minimum and 60% of flights to be canceled at Brussels airport. Staff in about two-thirds of hospitals in the French-speaking Wallonia region and Brussels joined in, with non-urgent appointments and operations postponed, the CSC union said.

Europe has faced a series of protests and strikes in recent months over soaring inflation. As Russia’s war in Ukraine has driven up energy and food prices, workers from nurses to pilots to railway staff have walked off the job, seeking wages that keep pace with inflation. Others have joined in by taking to the streets to pressure governments to do more to ease rising bills even as European leaders have passed energy relief packages.

And more are ahead. Half the Paris subway system will shut down Thursday during a strike for higher wages, part of a nationwide day of walkouts and protests by train drivers, teachers and other public-sector workers.

It builds on multiple actions in recent months by French workers demanding wage hikes to keep up with high inflation. Last month, a pay strike by oil refinery workers caused nationwide fuel shortages that disrupted lives and businesses, prompting the government to intervene to force them back to work.

Britain's largest nursing union, the Royal College of Nursing, said Wednesday that its members had voted to strike at a majority of hospitals and health centers across the country. No dates have been set for the walkout, which will be the first nationwide strike in the union’s 106-year history.

The U.K. has not had a general strike for almost a century, but labor unrest has been spreading across both public and private sector workplaces as inflation has crept above 10%. Railway staff, postal workers, lawyers, British Telecom staff, dockworkers and garbage collectors have all staged walkouts.

In Greece's capital on Wednesday, no buses or trolleys were running, while only one of the three subway lines was operating, running a limited service only until the afternoon.

Flight traffic controllers had been due to participate in the strike with a six-hour work stoppage but had to reverse that decision late Tuesday after a court deemed their participation illegal. However, airlines had already canceled dozens of flights, which they could not all reschedule at the last minute.

Passengers arriving at Athens’ international airport had extremely limited options to get into town, with no bus, regular taxi, subway or suburban railway services available. Crowds gathered at car rental agencies, while others tried to leave on intercity buses, which were the only form of public transport still running.

“Workers along with unions are fighting against increased prices that are drowning Greek households,” said GSEE, a confederation of private sector trade unions, citing price hikes for energy and basic goods.

Unions called for an increase in salaries and in the minimum wage, which is just over 700 euros (dollars) per month for salaried workers, and bolder measures to tackle inflation.

Annual inflation in the 19 countries that use the euro currency, including Greece and Belgium, hit a record 10.7% last month, largely driven by higher energy prices. Inflation was a bit lower in Greece at 9.8% in October — a drop from 12.1% in September — and higher in Belgium at 13.1%, according to EU statistics agency Eurostat.

Belgian trade unions say gas prices have gone up by 130% in just one year, electricity by 85% and fuel by 57%, while food prices also have increased.

AP reporters Costas Kantouris in Thessaloniki, Greece; Samuel Petrequin and Raf Casert in Brussels; and Jill Lawless in London and Angela Charlton in Paris contributed to this report.