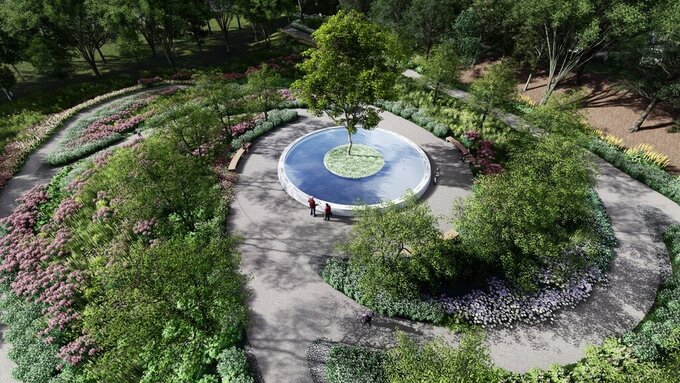 Daniel Affleck, ASSOCIATED PRESS
This illustration provided by Daniel Affleck, depicts his design for the proposed Sandy Hook victims memorial in Newton, Conn. The state is expected to give final approval to $2.5 million for the project Friday, July 23, 2021. (SWA Group/Daniel Affleck via AP)

Funding for renovations to state parks, highway and bridge improvements, clean water projects and a memorial to the 26 lives lost at Sandy Hook Elementary School were among the $1.1 billion in projects approved by the Connecticut State Bond Commission on Friday.

It marked the first meeting of the new fiscal year, which began July 1, and only the second during 2021. Democratic Gov. Ned Lamont, who chairs the commission and has imposed a so-called “debt diet” for state borrowing, suggested he's easing up on that stance.

“I’d say it’s a pretty robust agenda for what could be a pretty robust year when it comes to bonding,” he said. “The reason being, I think this is a unique time to be making investments in the state right now.”

Lamont noted how interest rates are at historic lows, the state's bond rating has improved and Connecticut residents are still looking for work as the state continues to emerge from the COVID-19 pandemic. While it has improved, the state unemployment rate for June was 7.9%.

About $600 million of the borrowing approved Friday was earmarked for general obligation bonds — money that will be spent on a wide range of projects such as improvements to the State Pier in New London. The site is being redeveloped into an offshore wind hub.

Tucked into a list of funding for local projects, such as the construction of four playscapes in West Haven, was $2.5 million to defray much of the $3.7 million that voters in Newtown approved in April to construct a memorial to the victims of the Sandy Hook Elementary School shooting in 2012.

Construction of the project is expected to begin next month at the site, located down the street from where the shooting occurred that killed 20 first-graders and six educators. The project is anticipated to be finished before the 10th anniversary next year, officials said.

Meanwhile, slightly more than $500 million of the projects approved on Friday are transportation-related, including state and local road, highway and bridge repair work. There's also funding for rail improvements, and bus and rail facilities.

Completion of the 25-year Merritt Parkway Improvement Program is among the transportation projects poised to receive funding. Nearly $61 million is earmarked for resurfacing work. To date, a total of approximately $350 million has been spent on improving the historic and scenic, limited-access parkway in Fairfield County.

“Traffic in southwestern Connecticut is increasing as we return to work and travel this summer, but long delays and poor road conditions can leave drivers fuming on the road,” said Senate Majority Leader Bob Duff, D-Norwalk, in a statement. “It’s very encouraging that this stretch of the Merritt will receive a facelift, making driving conditions better and safer in our region."