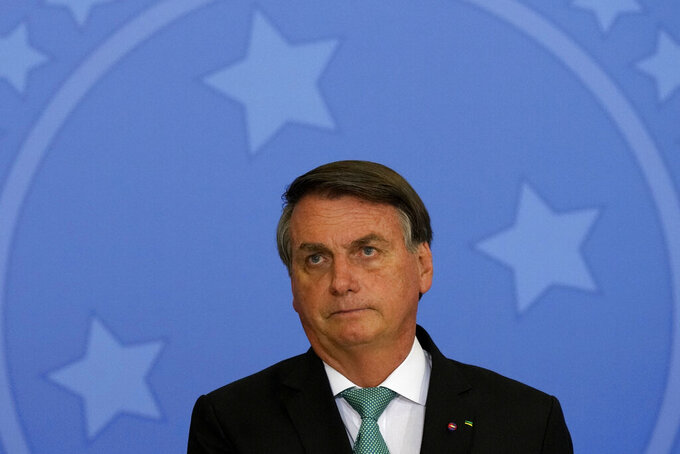 BRASILIA, Brazil (AP) — A Brazilian health care provider focused on elderly people has been targeted by a Senate investigation for allegedly obliging its doctors to prescribe drugs that aren't effective in treating COVID-19.

Lawyer Bruna Morato, who represents 12 whistleblowing doctors currently or previously employed by the company Prevent Senior, told lawmakers on Tuesday her clients were repeatedly told to choose between prescribing chloroquine to COVID patients, along with other dubious substances, or else lose their jobs.

“Some were warned, and that happened in front of others. Other professionals were fired,” the lawyer said. "There was also a punishment that was common: they had their shifts reduced. If you didn't show loyalty to the company and obedience to those protocols, you got punished."

Brazil's President Jair Bolsonaro and his allies have highlighted Prevent Senior as a role model in the fight against COVID-19 due to its advocacy for chloroquine as treatment, even as mounting evidence showed it to be ineffective. As recently as Sept. 21 at the U.N. General Assembly, Bolsonaro has insisted upon so-called “early treatment ” with hydroxychloroquine, a less toxic version of the same anti-malarial.

Morato said Prevent Senior gave doctors a kit with a total eight drugs and supplements, known as a "COVID kit.”

Prevent Senior said in a statement to The Associated Press that the lawyer's testimony was false, and based upon messages that were either hard to understand or edited so they could then be leaked to the press.

Last week, a director from Prevent Senior told senators that patients had agreed to take their COVID kits, and argued doctors were free to make their own prescriptions.

Sao Paulo state's prosecutors' office said Monday it is investigating Prevent Senior for allegedly researching chloroquine effects on COVID-19 patients without clearly letting them know they were part of a trial.

Bolsonaro praised Prevent Senior's studies on chloroquine on his social media channels in April 2020. He suggested the trials by the health care company had shown patients taking chloroquine were spending seven days on ventilators, as compared to 14 days among those who didn't.

His son Eduardo Bolsonaro, a lawmaker, compared Brazil to Afghanistan under the Taliban regime Friday, saying there is too much outrage directed at those who admit they are using the COVID kit. A frequent advocate of Prevent Senior on social media, he tested positive for the coronavirus last week.

“I am treating myself. You must guess with what. ... The doctor prescribed it. And overnight I am feeling much better," Eduardo Bolsonaro said in a live broadcast. “I have a runny nose, I am a little tired, but no fever. From now on, after I started the treatment, it can only get better.”

Brazil has confirmed more than 590,000 deaths from COVID-19, marking the second highest tally in the world behind the United States. ___ Associated Press writer Mauricio Savarese in Sao Paulo contributed to this report.