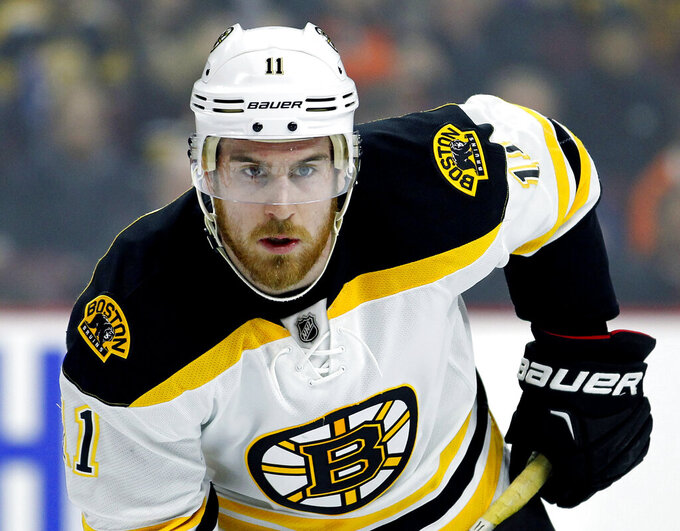 Tom Mihalek, ASSOCIATED PRESS
FILE - In this Jan. 13, 2016, file photo, Boston Bruins' Jimmy Hayes looks on during an NHL hockey game against the Philadelphia Flyers in Philadelphia. Kevin Hayes spent a life in step with big brother Jimmy, a couple of kids from Boston's largest neighborhood who attended the same boarding school, same college and, ultimately, played head-to-head in the NHL. In August, Kevin Hayes stood behind to a lectern inside a jammed Catholic parish, steeled his nerves and told mourners about the best brother in the world. (AP Photo/Tom Mihalek, File)

PHILADELPHIA (AP) — The tattoo runs along Kevin Hayes’ left forearm, a permanent reminder of what the Philadelphia Flyers center is missing, a solemn quote overlaid by a thick, script J for his late brother that serves as an indelible tribute to a bond he believes isn’t broken, merely changed.

The inscription Hayes never wanted to get reads: “Death leaves a heartache no one can heal, love leaves a memory no one can steal.”

At just 31, former NHL player Jimmy Hayes, married for three years and a father of two young boys, was found dead this summer inside his family home. Kevin says his brother was healthy and happy. He said he had no reason to believe anything suspicious about his brother’s cause of death, which has not been determined.

Nearly two months later, the idea of starting a season without his brother weighs on Kevin.

“We were best friends our whole life,” Kevin said.

Through bowling and baseball as kids to homecoming clashes at TD Garden, the Hayes brothers were as tight as a double knot; Kevin in step with big brother Jimmy, a couple of kids from Boston’s largest neighborhood who attended the same boarding school, same college and, ultimately, played head-to-head in the NHL.

They were the athletic anchors of a five-sibling Irish family from Dorchester, and everyone knew celebrity -- they shared a bloodline with cousins who made the NHL -- was destined for the boys.

“You couldn’t go anywhere without someone having a Hayes jersey on or something on the wall with a Hayes jersey,” Kevin said. “My dad’s huge in the community. My mom ran a daycare that everyone’s kids go to. It’s just a small-knit community, and me and my brother were literally like the face of Dorchester.”

The Hayes boys’ biggest fans were not the hockey zealots out of their working-class neighborhood that cheered them on as they became stars at Boston College, rather, they were each other.

When they reached the NHL, Kevin lingered during warmups at the red line and waited for Jimmy to glide over and break the ice with a stupid joke. The brothers lived together, trained together, golfed together, could be the life of the party together and were in each other’s corners, even as Kevin developed into a top-line center while Jimmy’s career ended in the minors after parts of seven NHL seasons.

“I think he accepted we were different players, that I was a little bit more skilled than he was,” said Kevin, in the third season of a $50 million, seven-year deal with the Philadelphia Flyers. “But I swear there was no more bigger supporter of me than my brother. He told everyone how good I was.”

Jimmy needled Kevin, insisting a bad game was never his fault and jokingly blaming a winger or coach Alain Vigneault for a loss. The good games, well, those were all Kevin.

“He thought I was the best player in the world,” Kevin said. “I would be talking about (Connor) McDavid and (Sidney) Crosby. He’s like, ‘No, I’m telling you man, you’re just as good as those guys.’ I’m like, ‘You’re nuts.‘”

In August, overwhelmed by grief that strikes as the ultimate price paid for love, Kevin stood behind to a lectern inside a jammed Catholic parish church, steeled his nerves and told mourners about the man he considered his hero.

Now, the 29-year-old Hayes, who will miss Friday’s season opener because of an injury, starts the next chapter of his life without the beloved ringleader of the Hayes crew.

“Even when you're mad at him for doing something stupid, he'll say something so dumb that you think he probably does it on purpose, where you're just like how could you even be mad at him,” Hayes said, a smile forming at the memory.

Shelagh Hayes helped raise five children, three daughters, and seemingly the entire neighborhood with an open-door house that was always full of friends and food. Their father, Kevin Sr., was his sons’ youth baseball and basketball coach, and the kind of guy who cracked during a cameo on an NHL reality show, “This is my chance to be a star!”

The kids all grown up, and after both parents survived bouts with cancer, the good times kept rolling in Massachusetts.

Take, for example, a scene from the “Road to the Winter Classic” TV series that opens with Jimmy in a black button-down shirt almost comically introducing an unending string of teammates, nieces, nephews, uncles, sisters, aunts, and finally, “My brother, Kevin.”

Jimmy pats his brother, wearing only a long-sleeve T-shirt and black hat, on the shoulder and quips, “Thanks for dressing up.” The good-natured competitive spirit quickly kicked in: Kevin chirps he’ll beat his brother in bowling, basketball and home run derby.

“Yeah, right, bro! I’ll give you home run derby, but that’s about it,” Jimmy said. “But bowling, bro, I’ll hit you from the left side with a NICE hook.”

Jimmy, who played 334 games for four teams including the Boston Bruins, badgered his little brother near the trade deadline for “one thing that’s true” inside the locker room. Hayes joked he could never let any chatter slip because the Flyers would obviously know he was feeding information.

Jimmy loved shooting the breeze on the podcast, telling stories like the time his dad profanely ripped him for a goal celebration shimmy at Boston College, and how close the storytelling kept him to the game in retirement. Kevin was an instant fan favorite in Philly and won the team award for player who showed the most heart, had a beer brewed in his honor and turned the Flyers into contenders in 2020.

“As you develop as a team and do the team bonding stuff, Kevin is a huge part of that for us,” Flyers winger James van Riemsdyk said. “He is the life of the locker room in that sense. People tend to gravitate toward him and love being around him.”

The funeral at St. Ann’s Church in Dorchester overflowed with mourners. Kids dressed in Dorchester Youth Hockey jerseys lined the streets. A bagpiper played on the steps. The hockey community at all levels showed up in droves. Former Boston Mayor Marty Walsh paid his respects.

Jimmy’s widow, Kristen, spoke at the service. Kevin choked back tears as he spoke about a time his brother met with a cancer-stricken child named Michael McHugh Jr. and brought him into the Bruins’ locker room.

“Jimmy stayed with Michael, taking pictures, giving him sticks, and giving him a bunch of Bruins swag,” Kevin said. “Unfortunately, Michael passed away just a month later. His dad told us it was the greatest night of his son’s short life. Michael loved Jimmy and he felt for the first time that he didn’t have cancer that night. His dad was awestruck by Jimmy’s kindness and was so grateful that Jimmy gave Michael one of the happiest days of his life.”

Kevin, now the big brother, stayed home as long as he could with his and his brother’s families.

“It was tough being in Boston because everyone knows us,” he said. “I couldn’t go get coffee or go for a walk without someone awkwardly staring at me, wanting to say sorry or give me a hug. It just kind of got draining. Instead of just sitting on my parent’s coach or Kristen’s house the whole time, it was nice to actually get back and look forward to the season.”

Kevin Hayes is back in Philadelphia and out another few weeks following abdominal surgery. He skates at the rink but misses the FaceTime chats with Jimmy on the 20-minute ride home. He doesn’t check his phone as much these days and he’s deeply apologetic over the hundreds and hundreds of well-meaning texts that have gone unanswered. But he does scroll Kristen’s Instagram account. Her page is an affectionate, heartbreaking remembrance of photos and videos of Jimmy Hayes mugging for the camera in a “dad” hat and walks on the beach with their oldest son with the caption, “We want you back dadda.”

Kevin laughs when he recalls how his brother and Kristen met at a seafood restaurant on the Boston Waterfront and admires how strong she has remained for sons Beau and Mac through the tragedy. His grief still so raw, Kevin says the boys will always know how much Jimmy loved them, how much he loved his family.

“I lost my best friend and my brother. She lost her husband and her father to her kids,” Kevin said. “It’s tough. I can accept what happened, that my brother’s gone and he died. I’m 29 years old and I understand what death is. The thing that I can’t get my head around, the whole, not to get spiritual, but God. Being mad at God.

“I don’t understand how those two kids don’t have a dad anymore. I can’t accept that. I don’t think I ever will.”

He pauses, and adds, “But I also look at God sending different messages.”

A season after missing the playoffs, the Flyers added Dorchester native, Hayes family friend and NHL iron man Keith Yandle along with Jimmy’s Boston College roommate, Cam Atkinson. Two guys who knew the Hayes brothers from back in the day now share a line; Yandle and Hayes are roommates.

The Flyers center called it a sign that both players found their way to Philly in the wake of tragedy.

“We both don’t like to be alone, so we are able to hang out every day,” Yandle said. “It will be good, too, especially during the season to be able to sit down and watch games. I think it is going to be a lot of fun. We watch a lot of TV, a lot of couch time and a lot of laughs.”

Jimmy and Kristen threw a 2-year-old birthday bash for Beau on Aug. 22 and invited everyone they could to celebrate. Jimmy’s old college teammates showed up. Kids in diapers made a mess. There was nothing out of the ordinary as the Hayes brothers planned a golf outing -- “he gave me his big, two-hand shake,” Kevin said -- and said goodbye.

The next morning, Kevin left his home and made the short drive for a scheduled workout when his mother called.

“I woke up in the morning to my mom screaming on the phone,” Kevin said. “My mom screamed, ‘He’s dead’ and I knew what she was talking about.”

Kevin sped back to his brother’s home and saw the worst: “I saw him being wheeled out, and ...,” his voice tailing off.

Kevin said Jimmy was happy in retirement; he loved his role as family man, golfer, podcaster and his little brother’s No. 1 fan.

Kevin wears a bracelet with his brother's initials. That tattoo also has his brother’s No. 11 and his birth and death dates. Kevin vowed to keep his brother’s legacy alive through his nephews, and those who loved him best.

“I don’t think anyone will fill my brother’s role as a dad or a parent,” Kevin said. “We’ll all try our hardest. Beau and Mac are really lucky that, even though it’s a sucky situation, they’re really lucky for all the support system they do have.”

Playing in his honor this season isn’t enough, Kevin has dedicated his life to his brother, living with the unyielding faith that the tight, brotherly bond in life is unbreakable in death.