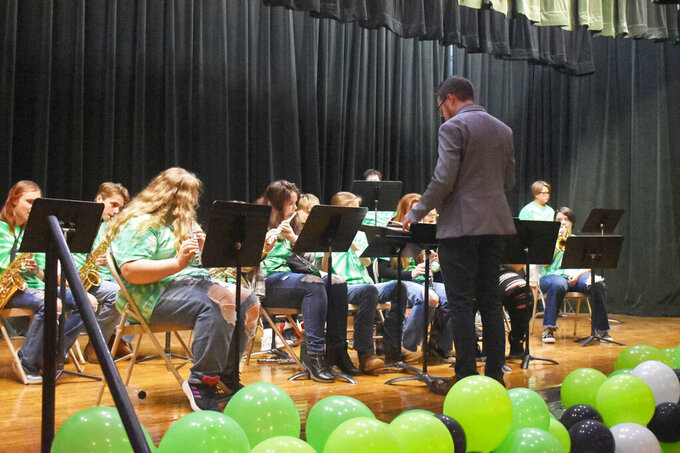 David Kirk, ASSOCIATED PRESS
The Mannington Middle School Band, under the direction of band director Matthew Morgan, performs Thursday, Oct. 27, 2022, in the school's auditorium at the Save the Music Foundation ceremony in Mannington, W.Va. The foundation donated $40,000 to help the middle school and nearby North Marion High buy new musical instruments. (David Kirk/Times-West Virginian via AP)

MANNINGTON, W.Va. (AP) — Next fall, the Mannington Middle School band will have brand-new instruments, thanks to a grant from the West Virginia Department of Arts, Culture and History.

The school’s student body gathered recently in the auditorium to listen to their band perform and to thank the WVDACH for its $40,000 grant in the form of brand-new instruments.

“This allows us to invest in kids who don’t have the money to buy their own instrument or to rent one. Now all the sudden they can get involved in band and possibly go on to do it in high school,” said Matthew Morgan, who serves as band director for both Mannington Middle and North Marion High. “The instrument will stay here at the school, but it will open opportunities for students that weren’t there before.”

The grant was part of the nationwide VH-1 Save the Music Foundation, a nonprofit that donates instruments and program materials to schools across the U.S. West Virginia is the only state where the program’s impact is statewide, as a school from each of its 55 counties is receiving support from the program.

Mannington Middle was one of three middle schools in the state to receive the $40,000 grant, alongside Romney School for the Deaf and Blind, West Preston Middle School and Elkins Middle School.

Many of the instruments his students play at Mannington Middle are still inscribed with Mannington High, which dissolved in 1979. The school was in need of a serious upgrade.

Mannington Middle is the second Marion County middle school to receive the grant, the first being Monongah Middle in 2012.

Randall Reid-Smith, curator of West Virginia Department of Arts, Culture and History, forged West Virginia’s historic partnership with the Save the Music Foundation.

Reid-Smith was in attendance Thursday and spoke about the importance of the programs across the state and why the governor is passionate about supporting arts opportunities for young students.

“The arts define who we are as West Virginians. We are in the center of Appalachia and most of those Appalachian arts started in West Virginia,” he said. “The arts are so important. No one wants to come to a town to live or do business if there’s nothing to do after work.”

Also attending the ceremony were representatives from the Marion County Board of Education, including Board President Donna Costello, an alumna of Mannington High.

Costello recalled her days as a student in high school band and was ecstatic to see these middle schoolers given this opportunity.

“It’s always extra special to see these things happening, because this is my alma mater,” Costello said. “Being a former band student, it means a lot to see this sort of promotion of the arts, because when words fail, music speaks.”

L.D. Skarzinski, the school district’s head of curriculum, said these are the little things that working in education are all about.

“This is what we do, we give opportunities to kids, that’s what it’s all about,” Skarzinski said. “Programs like this fit that need, these kids are going to get new instruments they may not have had before.”