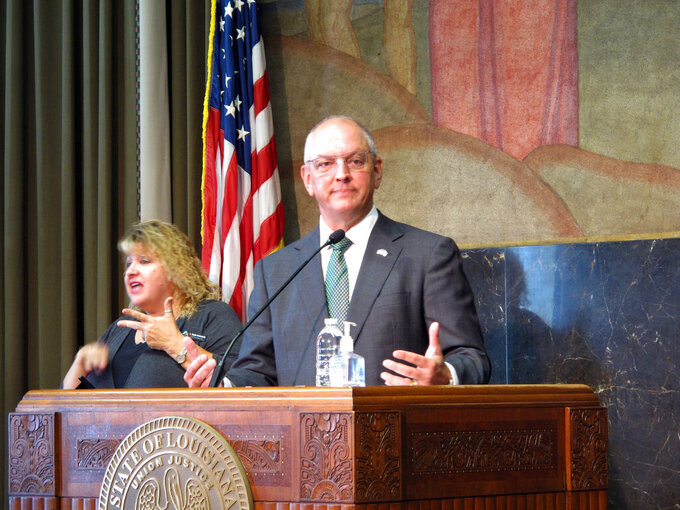 Melinda Deslatte, ASSOCIATED PRESS
Louisiana Gov. John Bel Edwards speaks about the state's latest surge in coronavirus cases, on Friday, July 23, 2021, in Baton Rouge, La. Edwards recommends that his state's residents return to wearing masks indoors, whether they are vaccinated against COVID-19 or not, if they are unable to distance from people. (AP Photo/Melinda Deslatte)

BATON ROUGE, La. (AP) — Louisiana is ending federal pandemic unemployment aid for its residents Saturday, booting nearly 200,000 people off benefits and cutting the payments to thousands more in the middle of a worsening COVID-19 surge across the state.

Louisiana residents will no longer receive an extra $300 a week on top of the state’s maximum $247 benefit. The state will stop participating in the federal program giving unemployment money to self-employed workers and gig workers who are ineligible for state benefits. And it's ending federal assistance that allowed people to get jobless benefits past a 26-week state cap.

The benefits were available until early September. But Gov. John Bel Edwards, a Democrat, is ending the aid five weeks early, in a deal with Republican lawmakers that will permanently raise state unemployment benefits by $28 a week, starting in six months.

With the early end to the pandemic programs, about 194,500 people in Louisiana will see their unemployment aid cut off entirely. Another 47,000 who can keep receiving jobless benefits will see the assistance sliced by more than half, according to data provided by the state's labor department, the Louisiana Workforce Commission.

Louisiana is joining two dozen Republican-led states that already have scrapped the federal unemployment aid before its Sept. 6 expiration date. Edwards is the first Democratic governor to end the jobless benefits early.

Edwards said he was trying to find a “reasonable balance” between helping the jobless and assisting businesses having trouble finding workers. Louisiana's unemployment rate was just under 7% in June, higher than 40 other states, according to federal data.

“Our core mission has always been putting Louisianians to work, but that is more important now than ever,” Workforce Commission Secretary Ava Cates said in a statement. “What matters right now is helping people provide for themselves and their families and making sure Louisiana comes back stronger than ever.”

Jan Moller, executive director of the left-leaning Louisiana Budget Project, which advocates for low- to moderate-income families, called the tradeoff with Republican lawmakers and business organizations “ugly politics that assumes people are lazy and unwilling to work.” He said Louisiana's economy was hit harder because of its over-reliance on tourism and oil industry jobs.

The stripping of federal unemployment aid comes as Louisiana has one of the nation's worst surges in coronavirus cases, fueled by the highly contagious delta variant and the state's low rates of vaccination against the COVID-19 illness caused by the virus.

“It was a bad idea in June. It’s a much worse idea in August when we’re in the middle of a fourth catastrophic wave and we don’t know how that’s going to affect our economy,” Moller said.

Ten leading Louisiana business groups representing contractors, homebuilders, convenience stores, gas stations, restaurants and retailers sent a letter to Edwards in May, urging him to cut off the federal unemployment aid and saying it is discouraging people from taking jobs.

“Many employers are finding it near impossible to fully staff their business, which impacts the supply chain and timely delivery of goods and services," they wrote.

Government surveys also have shown people are reluctant to look for work because they fear contracting COVID-19. In addition, other groups say many women have dropped out of the workforce to care for children, while some people are looking for better-paying jobs.

Edwards has said he expected more people would be able to go back to work in August when schools open and childcare was not needed, and he argued the long-term goal of increasing jobless benefits in a state with one of the lowest unemployment payments was worth the tradeoff.

Louisiana's maximum unemployment benefit will grow to $275 a week in January.

“We know these federal programs will be gone, but this increase in weekly state unemployment benefits moving forward will help people far into the future," Cates said.