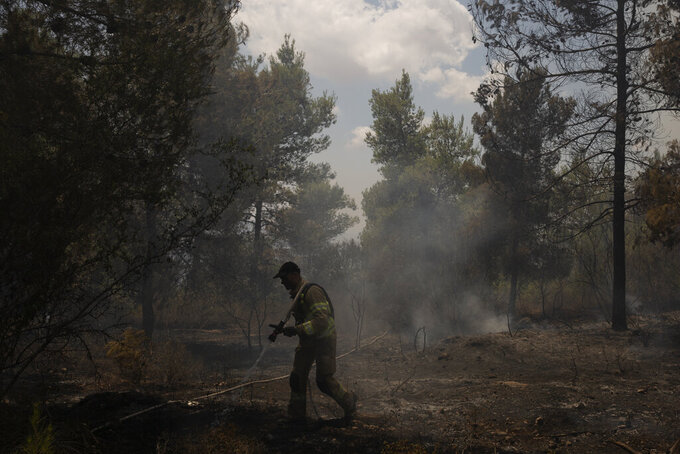 Maya Alleruzzo, ASSOCIATED PRESS
An Israeli firefighter works to extinguish a fire, on the second day of wildfires near Jerusalem, Monday, Aug. 16, 2021. Israel Fire and Rescue service said in a statement on Monday, that 45 firefighting teams accompanied by eight planes were working to contain five fires in the forested hills west of the city. (AP Photo/Maya Alleruzzo)

JERUSALEM (AP) — Israeli leaders on Monday appealed to its international allies as firefighters battled wildfires near Jerusalem for a second day after the blaze forced hundreds of residents from their homes.

Israel Fire and Rescue service said that 75 firefighting teams accompanied by 12 planes were working to contain a series of fires in the forested hills west of the city.

At least 17 square kilometers (6.5 square miles) of forest have already burned, according to official tallies, making it one of the largest wildfires in the country's history.

Foreign Minister Yair Lapid said he had spoken to his Greek counterpart, Nikos Dendias, asking for additional aircraft for the firefighting efforts and that Greece had pledged to help however possible. Israel in recent weeks had sent assistance to Greece while it was battling its own wildfires.

Lapid also said Israel was also reaching out to Cyprus, Italy and France and others about possible assistance.

Residents of several communities were evacuated from their homes on Sunday as the fire raged out of control, fueled by winds and extremely dry conditions after a hot summer. Additional evacuations were taking place on Monday.

Investigators were still working to determine the cause of the fire.