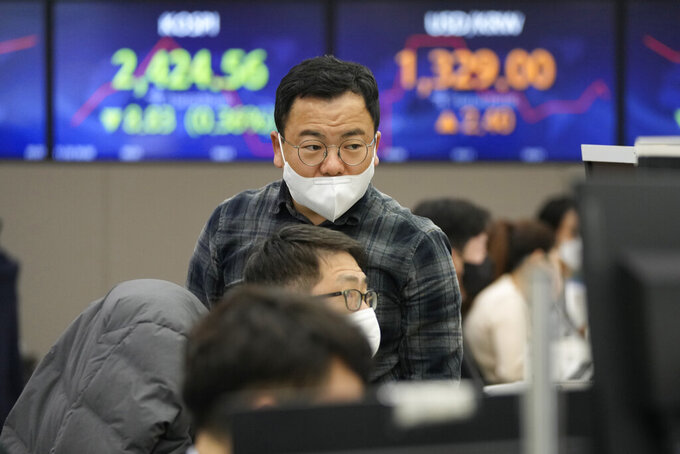 TOKYO (AP) — Asian shares were mostly lower Wednesday ahead of a closely watched speech by the Federal Reserve chief that may give clues about future interest rate hikes.

Investors were also eyeing developments in China, where protests have erupted over the “zero-COVID” strategy that has confined millions of people to their homes, sometimes for months. Shares fell in Tokyo but were higher in Sydney, Seoul, Hong Kong and Shanghai. Oil prices rose.

China has eased some controls after demonstrations in at least eight mainland cities and Hong Kong. It's unclear if protests will start up again after authorities detained an unknown number of people and stepped up surveillance.

Renewed restrictions on businesses and other activity have hit manufacturing, with an official survey announced Wednesday showing the purchasing managers index falling to 48.0 in November from 49.2 the month before. The index is on a scale of 0 to 100 where readings 50 and above show expansion.

“A further fall in the new orders and new export orders indices suggests this was largely driven by weakening domestic and foreign demand," Capital Economics said in a report. “Todays surveys suggest that intensified virus disruption has delivered another blow to the economy this month."

“Due to a more reflective approach to the recent zero-COVID measures, Chinese stocks have taken substantial leaps and bounds this week. However, that optimism is giving way to hawkish contemplation as traders twiddle their thumbs awaiting a speech from Federal Reserve Chair Jerome Powell later Wednesday,” said Stephen Innes, managing partner at SPI Asset Management.

Investors have been hoping that the Fed could ease up on its rate increases and are closely watching the latest data on inflation, consumer spending and the employment market. They’ll be looking for any signs of a shift in policy when Powell speaks at the Brookings Institution about the outlook for the U.S. economy and the labor market on Wednesday.

The Fed’s benchmark rate currently stands at 3.75% to 4%, up from close to zero in March.

Railroad operators rose amid hopes that a rail strike can be averted if Congress votes to impose a deal that unions agreed to in September. Union Pacific rose 2% and CSX gained 1.8%.

The Conference Board reported on Tuesday that consumer confidence fell slightly in November from October, but remains relatively strong. Consumer spending has been solid area of the economy, along with employment.

The U.S. government will be releasing several reports about the labor market this week. A report about job openings and labor turnover for October will be released Wednesday, followed by a weekly unemployment claims report Thursday. The closely watched monthly report on the job market will be released on Friday.

In energy trading, benchmark U.S. crude gained 81 cents to $79.01 a barrel in electronic trading on the New York Mercantile Exchange. Brent crude, the international standard, added 91 cents to $85.16 a barrel.