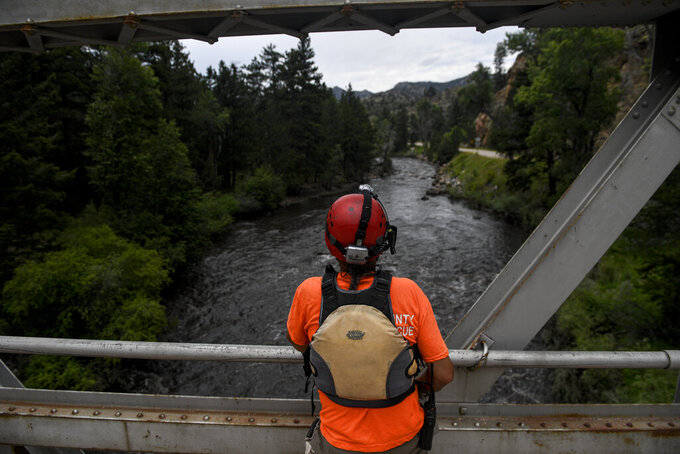 AAron Ontiveroz, ASSOCIATED PRESS
FILE - Jake Udel, of Larimer County search and rescue, monitors the water from a bridge, on Wednesday, July 21, 2021. A hiker found the remains of the fourth and final person who died during flooding and mudslides in an area of northern Colorado that was burned by a massive wildfire, authorities said. ( AAron Ontiveroz/The Denver Post via AP,File)/The Denver Post via AP)

FORT COLLINS, Colo. (AP) — A hiker found the remains of the fourth and final person who died during flooding and mudslides in an area of northern Colorado that was burned by a massive wildfire, authorities said.

The remains of Diana Brown, 57, of San Antonio, were found Saturday, according to the Larimer County Sheriff's Office. She was swept away by the flood waters July 20 along with her family members Richard Brown, of Bellevue, Nebraska; Patricia Brown, of Madison, Wisconsin; and David Brown, also from San Antonio.

Richard Brown owned a mobile home in the area, but his home residence was in Bellevue, Nebraska, the Fort Collins Coloradoan reported. All four victims were in the same house in the small Black Hollow area 45 miles (72 kilometers) west of Fort Collins when the flood hit.

The first three bodies were recovered several days after the flood, and the search was suspended July 29 with no sign of Diana Brown's body. Another unsuccessful search involving 120 people took place in mid-September.

The flooding and slides happened in an area that was burned last year by the 326-square-mile (844-square-kilometer) Cameron Peak Fire, the largest in Colorado’s history. Fires torch vegetation that usually helps absorb rain and keeps the ground stable, making those areas more vulnerable to flooding, especially in steep sections. The soil in burned areas can also repel rain.

Six homes were destroyed and another was damaged, all on the same road, according to the sheriff’s office.

Scientists say climate change is responsible for more intense and frequent extreme weather like flooding and droughts and events like wildfires. But more research is needed to determine how much global warming is to blame, if at all, for a single event.