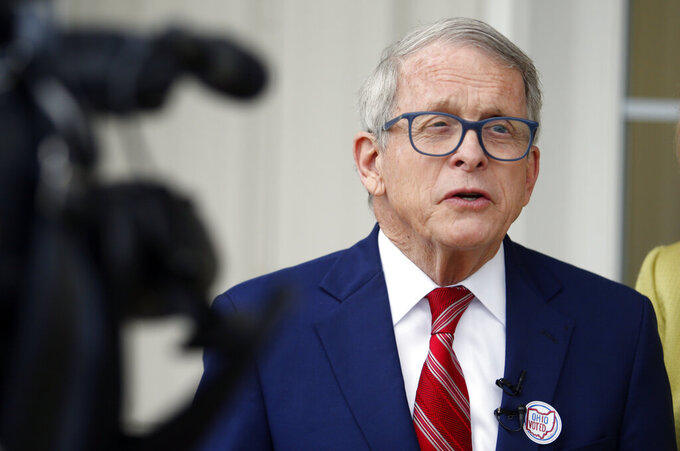 Paul Vernon, ASSOCIATED PRESS
Ohio Gov. Mike DeWine talks with reporters in Cedarville, Ohio, May 3, 2022. Gov. DeWine ended Ohio's participation in a federal pandemic unemployment aid program ahead of a government deadline for stopping the payments. Attorneys for the Republican governor argue he had the legal authority to do so. People who lost out on additional benefits says DeWine should have continued them. The Ohio Supreme Court heard arguments from both sides Wednesday, May 25, 2022. A decision isn't expected for weeks. (AP Photo/Paul Vernon)

Attorneys for the Republican governor argue he had the legal authority to do so. People who lost out on additional benefits say DeWine didn't, and should have continued them.

The Ohio Supreme Court heard arguments from both sides Wednesday. A decision isn't expected for weeks.

At issue before the court is a weekly $300 federal payment for Ohioans to offset the economic impact of the coronavirus pandemic. The federal government ended that program Sept. 6, but DeWine stopped the payments June 26, 2021, saying the need for the payments was over.

DeWine followed the position of business groups that said the payments were making it difficult to recruit employees, and he wasn't alone. More than two dozen other states, all led by Republican governors and legislatures, began blocking payments around the same time.

Multiple courts also backed the early termination of payments. In August 2021, an Indiana court upheld the decision by Gov. Eric Holcomb to withdraw from the program, saying the federal pandemic unemployment programs were intended to be temporary and differed from the already existing unemployment benefits system. However, the payments continued because the decision came too close to the Sept. 6 cut-off to give recipients' required notice.

Critics of ending the payments in Ohio and elsewhere said workers had reasons why they might not be returning to jobs.

Ending the program early stopped about $900 million in Ohio payments. The two sides disagree on whether that money could still be paid, should the court rule against DeWine.

“He thought that overall, on balance for the macroeconomy of state, for the future of those businesses, that it was a decision he had to make,” Hendershot said.

Just because the government channeled the pandemic dollars through Ohio didn't necessarily make them available, he added.

The attorney representing unemployed Ohioans seeking the benefits disagreed, saying the governor was required under state law to secure “all available benefits” related to unemployment compensation. Attorney Marc Dann said this requirement makes Ohio's situation different than other states where the termination was upheld.

DeWine was empowered to accept the benefits, “but he wasn’t empowered to make the policy decision to remove them,” said Dann, a former Democratic Ohio attorney general.

Justice Patrick Fischer questioned whether the issue was moot so many months later, noting the governor didn't have the money, and it's unclear whether the U.S. Dept. of Labor has it either.

Dann agreed the governor didn't have the money, but still was obliged to provide it.

“He acted without the constitutional and the statutory authority to turn down those funds,” Dann said. “As a result, the entitlement of those workers to that money remains, whether the federal government funds it or not.”

GOP Justice Patrick DeWine, the governor’s son, recused himself to avoid the appearance of impropriety “that might result from my father’s public involvement in this case.”

In an unrelated pandemic issue, justices heard arguments Wednesday in the case of season passholders of amusement parks operated by Sandusky-based Cedar Fair who say they're due refunds after parks shut down early in 2020 because of the coronavirus.