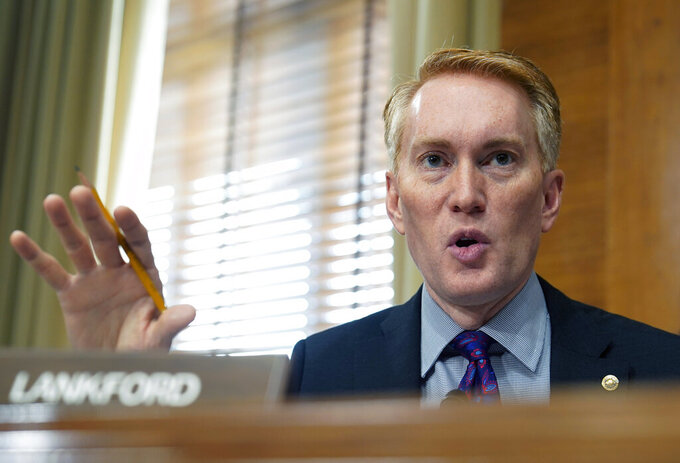 Mariam Zuhaib, ASSOCIATED PRESS
FILE - Sen. James Lankford, R-Okla., speaks during a Senate Energy and Natural Resources Committee hearing May 19, 2022, on Capitol Hill in Washington. Lankford is running for reelection to a full six-year term. With the announcement earlier this year that longtime Republican U.S. Sen. Jim Inhofe plans to step down from office early, Oklahoma voters have the rare opportunity to cast ballots on Tuesday, June 28 for candidates for both of the state's U.S. Senate seats. (AP Photo/Mariam Zuhaib, File)

Oklahoma's Senate races aren't expected to have much of an impact nationally, since both GOP nominees in the U.S. Senate races will be heavy favorites to keep the seats in Republican hands in November. Oklahoma hasn't elected a Democrat to the U.S. Senate in more than 30 years.

“I’ve had the pleasure of having a few interactions with Sen. Lankford, and I think he’s pretty professional," said Evan Sellars, 22, who cast his ballot for Lankford in Oklahoma City. “I think for the most part he’s doing a pretty good job."

Lahmeyer, a political newcomer endorsed by ex-President Trump’s former National Security Advisor Michael Flynn, had accused Lankford of not being conservative enough and criticized him for not endorsing Trump’s false claims about the 2020 election outcome.

On the Democratic side, Oklahoma City attorney Jason Bollinger, 30, and cybersecurity expert Madison Horn, 33, are the only candidates in a six-person field who had raised much money, according to the latest campaign finance reports. Neither Horn nor Bollinger captured more than 50% of the vote, setting up a head-to-head showdown between the two candidates in an August runoff.

In Oklahoma's other U.S. Senate race, to replace Inhofe, a stalwart in Oklahoma GOP politics since the 1960s, Mullin and Shannon, both 44, emerged from a 13-candidate Republican field seeking to become Oklahoma's newest U.S. senator. Among the other challengers were state Sen. Nathan Dahm, 39; Inhofe’s longtime chief of staff Luke Holland, 35; and ex-Attorney General and Environmental Protection Agency Administrator Scott Pruitt.

There seems to be little difference among the Republican candidates in both races on key issues, as all have expressed frustration with President Joe Biden's administration, opposition to restrictions on firearms and support of the U.S. Supreme Court's recent decision to overturn Roe v. Wade and allow states to ban abortion.

The winner in the race for Inhofe's seat will face Democrat and former U.S. Rep. Kendra Horn, 46, who is not related to Madison Horn, along with a Libertarian and an independent, in November's general election.