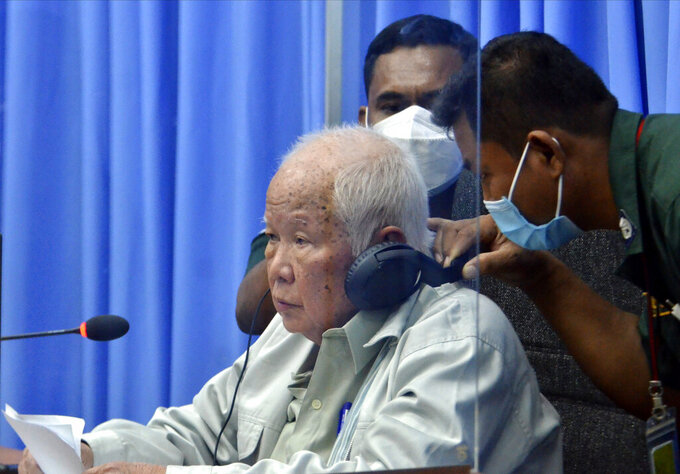 Mark Peters, ASSOCIATED PRESS
In this photo released by the Extraordinary Chambers in the Courts of Cambodia, Khieu Samphan, left, the former head of state for the Khmer Rouge, sits in a courtroom during a hearing at the U.N.-backed war crimes tribunal in Phnom Penh, Cambodia, Thursday, Aug. 19, 2021. The last living member of former Cambodian leader Pol Pot's inner circle denied complicity in the genocide committed under the brutal Khmer Rouge government, telling an international tribunal hearing his appeal Thursday that he was being judged as a proxy for the entire radical communist regime. (Mark Peters/Extraordinary Chambers in the Courts of Cambodia via AP)

PHNOM PENH, Cambodia (AP) — The last living member of former Cambodian leader Pol Pot's inner circle denied complicity in the genocide committed under the brutal Khmer Rouge government, telling an international tribunal hearing his appeal Thursday that he was being judged as a proxy for the entire radical communist regime.

Speaking slowly and deliberately, 90-year-old Khieu Samphan told the tribunal of Cambodian and international judges in a final statement to end his appeal of a 2018 verdict that he “categorically denied” participation in genocide, crimes against humanity and war crimes.

“The trial chamber has demonstrated its inability to adjudicate me impartially,” he said as he read his statement. “It is clear that through me, the chamber was, rather, targeting the Communist Party of Kampuchea.”

Khieu Samphan, was the former head of state for the Khmer Rouge, the name popularly used by the CPK, which ruled Cambodia with an iron fist from 1975 to 1979 and was responsible for the deaths of an estimated 1.7 million people.

During the four day hearing in Cambodia's capital, his defense team argued that the 2018 verdict should be overturned, alleging procedural failures during the original trial before the Extraordinary Chambers in the Courts of Cambodia, and questioning the evidence against their client.

Khieu Samphan was primarily convicted under the principle of joint criminal enterprise, under which individuals can be held responsible for the actions of the group to which they belong.

In her closing argument, defense attorney Anta Guissé reiterated her contention that the argument her client “could not not know” as a key member of the Khmer Rouge government was not enough to meet the burden of proof.

“When he was at these meetings, he was there as a senior leader of the CPK — he had the ability to object,” Hollis told the tribunal. “Instead, he supported in the meetings, either by silent ascent or active support, decisions relating to criminal policies and their implementation.”

Under Pol Pot's leadership, the Khmer Rouge sought to eliminate all traces of what it saw as corrupt bourgeois life, destroying most religious, financial and social institutions, and forcing millions out of cities to live in the countryside.

Dissent was usually met with death in the notorious “killing fields” or elsewhere, while starvation, overwork and medical neglect took many more lives.

Only when an invasion by Vietnam finally drove the Khmer Rouge from power in 1979 did the magnitude of the killings become truly known.

After being ousted from power in 1979, the Khmer Rouge waged guerrilla warfare for another two decades before disintegrating. Pol Pot died in the jungle in 1998, and on Christmas Eve that year, Khieu Samphan surrendered along with Nuon Chea, the movement’s chief ideologue.

Nuon Chea was considered Pol Pot’s right-hand man, while Khieu Samphan as head of state presented a moderate veneer as the public face for the highly secretive group.

Nuon Chea was convicted alongside Khieu Samphan in 2018 and died the following year.

Khieu Samphan’s 2018 conviction was largely connected to crimes committed against Vietnamese and Cham minorities in Cambodia.

The only other leader convicted by the panel has been Kaing Guek Eav, also known as Duch, who as head of the Khmer Rouge prison system ran the infamous Tuol Sleng torture center in Phnom Penh. He died in 2020 while serving a life prison term for war crimes and crimes against humanity.

After the conviction of Khieu Samphan and Nuon Chea in 2018, the government of autocratic Prime Minister Hun Sen, himself a midlevel Khmer Rouge commander before defecting while the group was still in power, declared no more cases would go forward, saying they would cause instability.

A verdict on Khieu Samphan's appeal is not expected until next year, and even if the 2018 conviction is overturned, he is already serving a life sentence on a 2014 conviction on crimes against humanity connected with forced transfers and disappearances of masses of people. That conviction was upheld on appeal in 2016.

“No matter what you decide, I will die in prison,” Khieu Samphan said as he ended his nearly 20 minute statement to the tribunal.