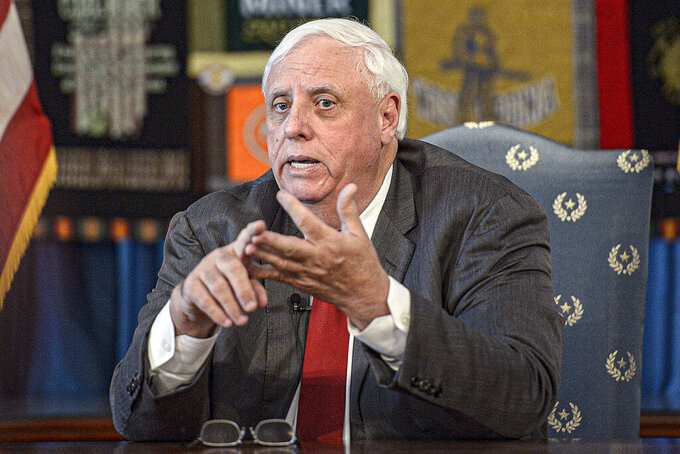 CHARLESTON, W.Va. (AP) — West Virginia's coronavirus vaccination figures were adjusted sharply lower Wednesday after a problem was identified with data from a federal contractor whose numbers had been double counted.

After the error was discovered, the state’s health data was changed to show that 63.7% of people over age 12 have received at least one dose of the vaccine instead of the 74.3% previously reported. The state’s dashboard continued to list the percentage of those 12 and older who are fully vaccinated at 60.1%.

Retired National Guard Maj. Gen. James Hoyer, who leads the state’s coronavirus task force, said at a news conference that the state discovered a problem with contractor data from the U.S. Centers for Disease Control and Prevention. Hoyer said the numbers were related to a federal pharmacy program.

“Since the first part of May, they’ve been double counting the numbers sent to us,” Hoyer said. “It has made a significant impact on the numbers.”

CDC spokesman Scott Pauley said in an email that the agency is working with the state to address the problem.

“Occasionally, issues related to processing or transmission of data will occur,” Pauley said. “When issues arise, CDC works closely with states, territories, and federal entities to resolve the issue.”

Gov. Jim Justice said the bottom line is the state needs to find even more people now who haven't received their first dose of the vaccine.

That might make the mission more challenging for the nonprofit Community Education Group, which was given a $3.5 million federal grant last month to boost COVID-19 testing and vaccine efforts in West Virginia, as well as address HIV and substance abuse prevention.

The group is based in the Hardy County community of Lost City. The one-year pilot project aims to reach deep within individual communities and residential settings to reduce disparities in vaccination coverage in rural, at-risk and underserved areas. Executive director A. Toni Young said the group will hire and train health-care and community workers to distribute COVID-19 and other vaccines.

As winter approaches, the group will be pushing residents to get vaccinated both for the flu and for COVID-19, Young said.

“This has got to be a door-to-door, person-to-person campaign,” Young said Wednesday. "And I think we have our partners ready to do that. We have got to get people protected, particularly the most vulnerable in the state.”

The number of people currently hospitalized for the virus hit a record 1,000 Wednesday and there have been at least 383 deaths this month, more than June, July and August combined, according to health data.

But there are some signs the latest surge is slowing down. The number of active cases have been cut nearly in half over the past four days from a record 29,744 last Thursday.

According to the CDC, the seven-day average of virus cases in West Virginia is the second highest in the nation at 710 per 100,000 population.