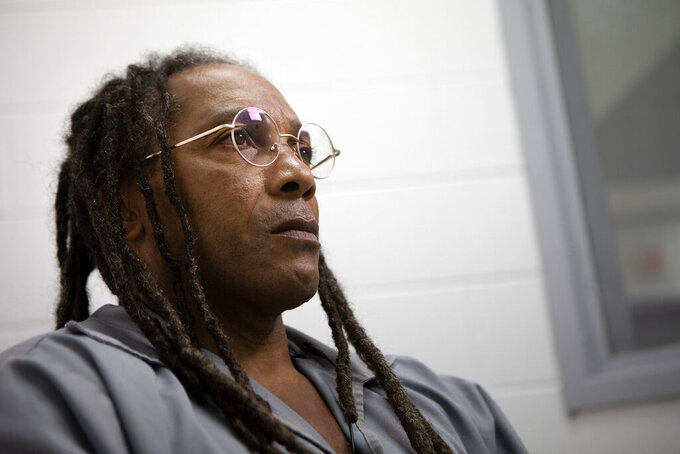 James Wooldridge, ASSOCIATED PRESS
FILE - In this Nov. 5, 2019, file photo, Kevin Strickland is pictured in an interview room at Western Missouri Correctional Center in Cameron, Mo. A Missouri Supreme Court judge has ruled that Jackson County judges cannot preside over an evidentiary hearing to determine if Strickland should be exonerated in a triple murder case from 1979. The court ruled Thursday, Sept. 30, 2021, that judges in the 16th Judicial Circuit, which includes most of Kansas City, must be prohibited from presiding over an evidentiary hearing for Strickland. (James Wooldridge/The Kansas City Star via AP, File)

LIBERTY, Mo. (AP) — All judges in the 16th Judicial District based in Jackson County will be prohibited from presiding over an evidentiary hearing that could determine whether a Kansas City man would be exonerated in a triple murder committed more than 40 years ago, the Missouri Supreme Court ordered Thursday.

The ruling came in the case of Kevin Strickland, 62, who was scheduled to have an evidentiary hearing next week to determine if he would be freed, after Jackson County Prosecutor Jean Peters-Baker announced in May that new evidence indicated he did not commit the murders.

Missouri Attorney General Eric Schmitt argued in a petition filed Thursday with the state Supreme Court that Judge Kevin Harrell and all judges in the 16th Judicial District, which includes a large portion of Kansas City, were biased in favor of Strickland. He cited a letter from the circuit's presiding judge that said he agrees that Strickland was wrongfully convicted.

Schmitt, a Republican who is running for the U.S. Senate, has said he believes Strickland is guilty.

Earlier this month, Harrell rejected a motion from Schmitt that he recuse himself and all other 16th Circuit judges. A Missouri appeals court rejected Schmitt's arguments last week.

The Supreme Court issued a brief ruling that said Harrell had not shown any disqualifying bias in previous hearings in Strickland's case.

“Nevertheless, to avoid even the appearance of partiality or impropriety, this Court finds it necessary to prohibit (Harrell) and all other judges in the 16th Judicial Circuit from presiding over (Strickland's hearing),” the order said.

Senior Judge James Welsh was appointed to preside over the hearing. Welsh was named a senior judge after serving on the Western District of the Missouri Court of Appeals and in Clay County courts. He retired in 2018.

The ruling was likely to delay the evidentiary hearing, which was scheduled to be held Tuesday and Wednesday.

Jared Bustamante, a spokesman for Peters-Baker's office, said she would have no comment on Thursday's ruling.

And Chris Nuelle, a spokesman for Schmitt, said the attorney general also would not comment on the decision.

Peters Baker and Strickland's attorneys have argued that evidence used to convict him in 1979 has been disproved or recanted. Prosecutors said the only person to identify Strickland as the shooter later recanted and two men who were convicted have said Strickland was not with them when John Walker, 20; Sherrie Black, 22; and 21-year-old Larry Ingram, were killed.

Under a new state law that took effect in August, Peters Baker filed a motion asking a judge to hold the evidentiary hearing to determine if Strickland should be freed.

This story was first published on Sept. 30. It was updated on Oct. 1 to correct that the entire state Supreme Court, not just its chief justice, issued the order recusing the judges. It also clarifies that the attorney general's spokesman's name is Chris Nuelle.