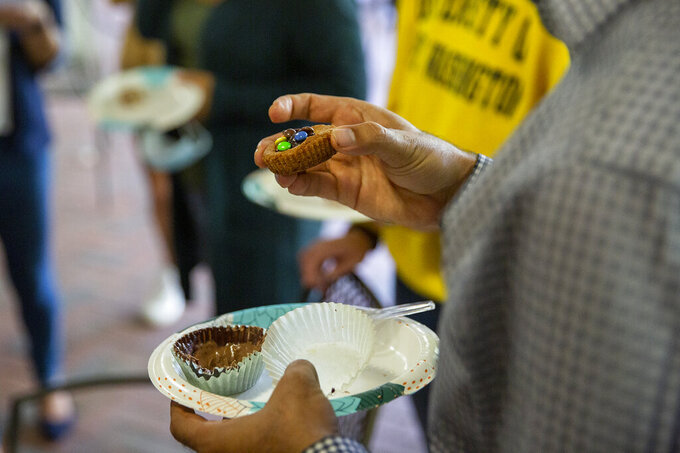 Tristan Lorei, ASSOCIATED PRESS
Professor Kashef Majid holds up a pastry made by one of his students during his course about alleviating food waste at the University of Mary Washington on Monday, Oct. 25, 2021, in Fredericksburg, Va. (Tristan Lorei/The Free Lance-Star via AP)

That’s when he and students in his new course “Alleviating Food Waste” get to sample delicious treats concocted using “expired” food rescued from the Fredericksburg Food Co-op.

On a recent Monday, they snacked on blueberry muffins, S’mores popcorn, mini sliders and at least three chocolate-based desserts.

On other Mondays, the class has enjoyed pizzas, cupcakes, muffins, rice balls, trail mix and granola bars—all made with food destined for the trash.

“Mondays are a good day,” Majid said. “The students do their cooking on the weekend using ingredients that would otherwise have been discarded. We’ve had some really good stuff.”

Majid developed the new course based on his own interest in and research on the subject of food waste, which is an environmental, social and economic challenge for the United States and the world.

“The course has a couple of goals,” he said. “I want students to be aware of how big a problem this is, and that this is a fixable problem.”

Between 30 and 40 percent of food that is produced gets wasted, Majid said—the equivalent of buying four grocery bags worth of food and just leaving one on the ground.

That waste is occurring alongside widespread food insecurity. According to Feeding America, the nonprofit that operates a network of 200 food banks across the country, an estimated 38 million Americans—including more than 12 million children—were food insecure last year.

“If we even reduced the amount of food wasted by 20 percent, we wouldn’t have food insecurity,” Majid said.

Students in the course are learning how the problem of food waste can be fixed through public policy and supply chain adjustments, but also on a personal level, through changing consumer behavior.

One of Majid’s common refrains is, “the best-by date is not a thing.”

Rather, the best-by date is a marketing tactic that manufacturers use to encourage consumers to buy more.

“If someone eats some potato chips a month past the best-by date, it’s perfectly fine,” he said. “But people will look through their cabinets and go, ‘Oh, the best-by date is two days from now,’ so they’ll throw it out and go buy more.”

Students in the class are getting a firsthand look at how best-by dates cause food waste through a partnership with the Fredericksburg Food Co-op.

Each week, they spend several hours at the store, documenting expiration dates and noting which products are selling.

For example, they’ll document the expiration dates on each carton of yogurt and the following week, they’ll look to see which cartons are still in the refrigerator.

When the co-op is getting rid of products because of appearance or expiration date, students can take them home and earn academic credit by “upcycling” them—using them in a recipe.

This is one of the ways consumers can change their behavior to eliminate food waste, Majid said.

Majid estimated that the class has saved 10 pounds of food this way—and compared with other grocery stores, he said, the co-op is “efficient and really good about not wasting anything.”

Students also learn about how some large grocery store chains and local governments are beginning to tackle the problem of food waste.

Majid said a grocery chain in France started selling eggs individually instead of by the dozen, to prevent having to discard a whole carton because of one cracked egg, and a Maryland county is investing in large-scale composting facilities.

Majid said stores are often reluctant to donate “expired” food to the homeless or food insecure because they fear being held liable if someone gets sick from it. However, a Virginia law known as the “Good Samaritan” law protects anyone who renders emergency assistance in good faith from being held responsible.

Majid hopes he’ll be able to continue offering the course in future semesters and expand the number of community partners.

“(The course is) housed in the business school, but it covers so many areas,” Majid said. “We’ve got students from all sorts of disciplines. Some are majoring in English, sociology, biology, digital studies and economics, besides business and marketing.

“It’s been great for everybody—the students, myself and the people we work with (at the co-op). They’ve been fantastic through this whole thing. It’s a good example of school and community partnership.”