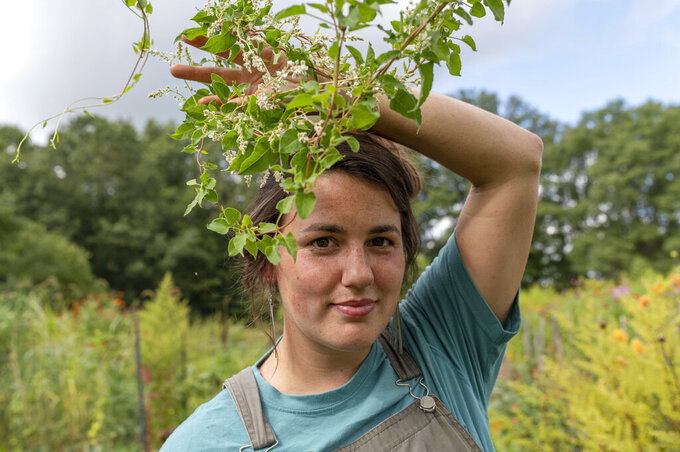 Battle Creek Enquirer (AP) — Martha Thawnghmung finds clarity of mind on summer mornings when she’s surrounded by a choir of insects and an abundance of color in her garden.

Walking barefoot in the dirt on the first of September, she wove the petals of a tuberose flower through her fingers.

“It’s a smell that’s familiar to Burma, I’m trying to grow more of it,” Thawnghmung said. “What you smell as a kid, we never forget.”

Like the tuberose, a cluster of eucalyptus she gathered for a bouquet that morning conjured the memory of a lizard she once saw climbing a tree outside her childhood home, the Battle Creek Enquirer reports.

Thawnghmung moved from Burma, now called Myanmar, to Battle Creek in 1980 at age 9. As an influx of Burmese people fled political upheaval, the Thawnghmungs hosted several families at their home until they found their footing.

Martha Thawnghmung is known around Battle Creek for her work as the former director of the Burma Center.

These days, she is rediscovering her identity and a new place in the community as she aligns herself with nature.

“Somehow, somewhere we picked up this idea that we have to be something,” Thawnghmung said. “I’m doing what I want to do, what I’m supposed to do, which maybe is just an emulation of what everything else does.”

Thawnghmung’s urban garden is secluded by shrubs on a side street off of Columbia Avenue in Battle Creek. She named her sacred space the Big Bloom.

Nearly 20 years ago, two of her brothers purchased homes next to the other. In their backyards, their father grew red hibiscus, bitter melon, African eggplant and other vegetables commonly used in Burmese cuisine.

After which, the land sat empty for several years.

Thawnghmung took up gardening in 2018 when her daughter Isabella Detomaswanted wanted to sell bouquets for a school supplies fundraiser. Before they knew it, their lawn transformed into a field of pink and orange zinnias.

The front yard could not contain her newfound passion. In 2019, Thawnghmung revived her family’s plot of land to make it her own.

“I only grow flowers that I love, I guess that’s intentional,” Thawnghmung said. “I grow flowers that maybe I’ve never seen, or ones that evoke emotion, or that have so much character that they work well in bouquets.”

She estimates there are 30 types of plants in her garden. Those include rosemary, dahlias, snapdragons, sunflowers, lisianthus, bunny tails, foxgloves, tuberose and eucalyptus.

Naturally, the Big Bloom became a conduit to her community.

“We have a lot of pedestrians stop by to say hi, or wonder what’s going on,” Thawnghmung said. “Last year, I had a young man ask if he could pick flowers for his girlfriend.”

Their friendship evolved into a mission to cover Battle Creek in flowers.

Like Thawnghmung, Langford is putting her own stamp on her family’s land.

Marygold Meadows is located on the farm her family has owned in Bellevue for 100 years.

“It’s sort of named after my grandma who lived here and worked very hard to make things beautiful...and to raise a family,” Langford said.

Langford recently wandered through the flowers sipping on iced coffee. Pollen sticking to her skin, the aroma of dill transported her back to childhood.

“(My grandparents) always had dill growing on the side of their house,” Langford recalled. “It was so experimental to just go out and be able to taste the things that were growing.”

She found her way back to the family farm after working in a greenhouse reignited her youthful curiosity.

An estimated 1,500 dahlias stretch across the field. Several agricultural efforts have taken place on her family’s land, but the happiness a flower can bring someone is how Langford found her niche.

“At the farmers market, people just stop in their tracks, and they’re like, ‘oh, my gosh, I haven’t seen anything so beautiful,’” Langford said. “It’s so humble and it’s just a flower, but it really just has the power to connect people.”

The joy of a flower is the foundation of her friendship with Thawnghmung. Together, they are finding creative ways to spread that joy.

Last month, The Big Bloom and Marygold Meadows collaborated on two flower installations downtown during the Color the Creek mural festival and the Through Our Eyes Burmese art showcase.

“I think we both maybe early on identified that we wanted to cover the world in flowers, and it’s a little hard to do that when you’re one person,” Langford said. “But two people, I think it just makes it that much easier. It just felt really natural.”

The gardeners built both of the larger than life displays on site and many stopped to watch and ask questions.

Thawnghmung and Langford are also using their flowers to foster community by hosting garden parties.

“It’s a good time to be in Battle Creek,” Langford said. “There’s a lot happening.”

Friends gathered at the Big Bloom in August for a Sip-N-Snip, a party in which guests could pick flowers and arrange bouquets while sipping on cocktails.

“It’s definitely a hidden gem in Battle Creek,” guest Hannah Stevens said after attending. “It was so nice to make art from nature with people from all walks of life because, at the end of the day, we are all human.”

Stevens brought the giant bouquet she made home to her mother, whose face lit up with a smile.

“I thought it was just magical... and I guess the pandemic I feel like, people were really looking for ways to maybe redefine their existence,” Langford said. “The Sip-N-Snip was a great way to get people out and doing things that were maybe different for them and being creative and touching real things, like being in contact with the real world.”

Growing flowers is how Thawnghmung found inner peace. Giving them away is how she connects with people.

“It’s my way of acknowledging your presence... that you and I are alive at the same time,” Thawnghmung said. “What I want for my daughter and everyone else is to feel alive for a moment, because one blink and it’s over.”