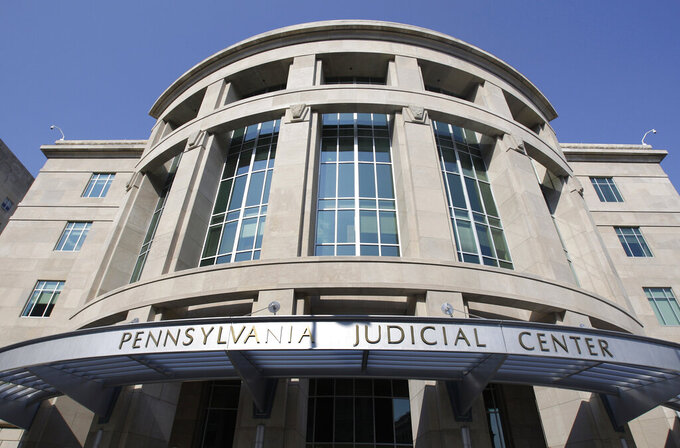 Carolyn Kaster, ASSOCIATED PRESS
FILE – This July 27, 2009, file photo shows the Pennsylvania Judicial Center shortly after its completion in Harrisburg, Pa. The fate of a constitutional amendment for victims' rights that Pennsylvania voters apparently approved overwhelmingly nearly two years ago is about to go before the state's highest court. The state Supreme Court justices will hear oral argument in Harrisburg Tuesday, Sept. 21, 2021 regarding whether the so-called Marsy's Law amendment should have been split into more than just one ballot question. The court is considering whether to uphold a divided decision in January by Commonwealth Court. The lower court ruled it ran afoul of a Pennsylvania Constitution provision that requires amendments to address a single subject only. (AP Photo/Carolyn Kaster, File)

HARRISBURG, Pa. (AP) — Questions about the legality and practical effect of a victims' rights amendment to the Pennsylvania Constitution that has been in limbo for almost two years dominated oral arguments in the state Supreme Court on Tuesday.

The justices could act to put the ballot question into the constitution, upholding unofficial tallies that showed it being approved in 2019 by a ratio of 3 to 1, or could kill it because it bundled together various provisions that opponents say are insufficiently related.

The amendment spells out 15 rights for victims, including notification about their cases and the right to attend and weigh in during plea hearings, sentencings and parole proceedings. It also spells out rights about recovering property and the ability to reject defense subpoenas and states the General Assembly can fine-tune victims' rights.

David Pittinsky, a lawyer for the four voters seeking to overturn a lower court ruling that invalidated the referendum results earlier this year, said the so-called Marsy's Law provisions are not disparate, telling the justices “every single one of these are to protect those rights.”

The state Supreme Court ruled shortly before the November 2019 vote that election officials could not tabulate or certify the votes while litigation continued.

Chief Justice Max Baer said the constitution's requirement that amendments address a single topic is meant to prevent impermissible log-rolling, in wich voters who favor one change find themselves forced to swallow elements they do not support to pass what they do want.

Asked why the 15 rights weren't presented as individual amendments, Pittinsky said that was a matter of the Legislature's discretion. Constitutional amendments have to pass both General Assembly chambers in two consecutive sessions before going to voters for final approval.

Justices also were interested in how the amendment will affect their broad power over court processes.

“This is saying to courts, you can't really control these proceedings now in a manner you see fit,” said Justice Christine Donohue.

Pittinsky told the justices that future litigation might end up before them to “reconcile” the amendment's elements with other court rules, and argued they should not nullify the referendum results over the prospect of a future case or controversy.

He also noted the state has a victims' rights law already that provides some of the same protections.

Simply declaring that a group of changes all pertain to victims' rights doesn't make them related, argued American Civil Liberties Union of Pennsylvania lawyer Mary Catherine Roper. She said the amendment's explicit authority to let the General Assembly expound upon it “infringes on this court's otherwise exclusive authority over court proceedings.”

Roper argued the amendment would require notice about hearings and other rights to a very broad group of people, those “affected by crimes and those alleged to have been affected,” using as an example a bar owner whose property sustained minor damaged in a crime. She said establishing a crime has occurred happens at the end of criminal proceedings, but the amendment establishes rights for victims that would be in effect before that takes place.

The state ACLU opposed the amendment before voters gave it their OK.

In throwing out the vote results in January, Commonwealth Court Judge Ellen Ceisler said the state constitution requires separate votes on distinct amendments, “and the proposed amendment fails to satisfy this mandate, disenfranchisement will occur if the electorate must vote on the proposed amendment as a unitary proposal.”

The four people who are seeking to have the referendum results counted and the amendment language go into force are crime victims or family members of a crime victim.