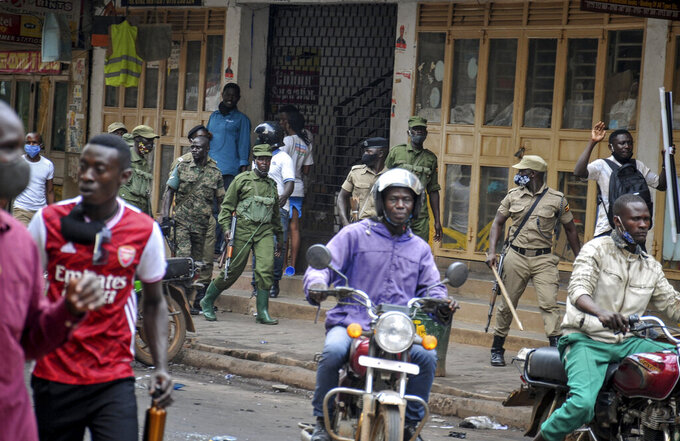 Uncredited, ASSOCIATED PRESS
FILE - In this Thursday, Nov. 19, 2020 file photo, Ugandan security forces patrol on a street after protests over the arrest of opposition presidential candidate Bobi Wine, in Kampala, Uganda. The United States said Friday, April 16, 2021 that it is imposing visa restrictions on "those believed to be responsible for, or complicit in, undermining the democratic process in Uganda," including during the election in January and the campaign period. (AP Photo, File)

NAIROBI, Kenya (AP) — The United States says it is imposing visa restrictions on “those believed to be responsible for, or complicit in, undermining the democratic process in Uganda,“ including during the election in January and the campaign period.

Secretary of State Antony Blinken in a statement said the Ugandan government’s actions “represent a continued downward trajectory for the country’s democracy and respect for human rights.“ The election in which longtime President Yoweri Museveni won a sixth term “was neither free nor fair,“ Blinken said.

The statement did not say who is affected by the visa restrictions.

The election was a generational clash between Museveni, 76, and the popular singer and opposition lawmaker known as Bobi Wine, 39, who was detained and harassed multiple times ahead of the vote. Wine later alleged widespread irregularities in the election.

Blinken said that “opposition candidates were routinely harassed, arrested, and held illegally without charge. Ugandan security forces were responsible for the deaths and injuries of dozens of innocent bystanders and opposition supporters.” Civil society figures were intimidated and arrested, and journalists were targeted with violence, he said.

Uganda’s government limited accreditation for election observers to the point where the United States decided not to observe at all.