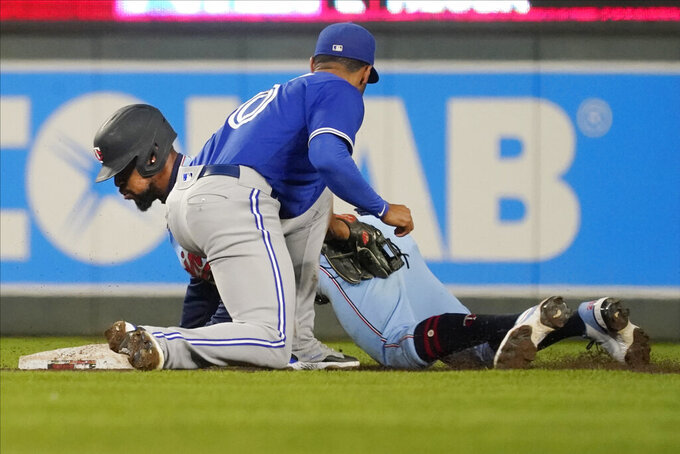 “We did what we do tonight,” Semien said. “ … We knew we have our ace on the mound and put up some more runs and do our thing.”

Semien hit his 43rd home run in the sixth for a 3-1 lead. That ties him with Davey Johnson of Atlanta in 1973 for the most home runs in a season by a second baseman.

Springer snapped an 0-for-16 skid with a two-run shot in the seventh. It was his 18th of the season and first since Sept. 11.

“I never seen the dugout so happy to see George hit that ball because we know he can be that guy to carry us for the next seven games,” manager Charlie Montoyo said.

Ray, who leads the AL with a 2.68 ERA and tops the majors with 244 strikeouts, gave up one run and fanned six.

“It’s kind of been my focus all year is coming in putting up zeroes, giving my team a chance to win and especially tonight knowing that this is pretty much a must-win ball game for us to stay where we are, stay in this thing,” Ray said. “To be able to go out and do that was huge.”

“He can win the Cy Young,” Montoyo said.

Minnesota scored on a sacrifice fly in the first and had runners on in four of the next five innings. Ray escaped a two-on, one-out jam in the sixth, ending his outing by getting Miguel Sanó to foul out and Nick Gordon to line out. The Twins were 0 for 6 with runners in scoring position.

“When you’re facing a guy like this, you definitely have to capitalize every opportunity you can because you’re only going to get so many,” said Twins manager Rocco Baldelli.

Hernández homered and Santiago Espinal scored on a double by Randal Grichuk, coupled with an error by right fielder Brent Rooker, for a 2-1 lead in the second.

Out since Sept. 14 with a left abdominal strain, Minnesota starter John Gant (5-10) came off the 10-day injured list and allowed two runs — one earned — in three innings.

Former 1B Justin Morneau was inducted into the Twins Hall of Fame.

The native of New Westminster, British Columbia, hit .278 in 11 years with the club. Morneau ranks second on the Twins all-time list in games played at first base (1,124), third in home runs (221), sixth in RBI (860), and eighth in hits (1,318) and walks (501). The American League MVP in 2006 also was a four-time All-Star. He finished his 14-year career with stints in Pittsburgh, Colorado and with the White Sox, and was inducted in the Canadian Baseball Hall of Fame in 2020. He remains with the Twins as a special assistant to baseball operations and part-time analyst on the team’s television broadcasts.

Blue Jays: RHP Joakim Soria was placed on the COVID-related injured list and LHP Kirby Snead was recalled from Triple-A Buffalo. … Montoyo said OF Lourdes Gurriel Jr. might not return to the lineup until Tuesday. Gurriel’s hand was stepped on by a teammate during an outfield play Thursday and he received stitches in his middle finger.