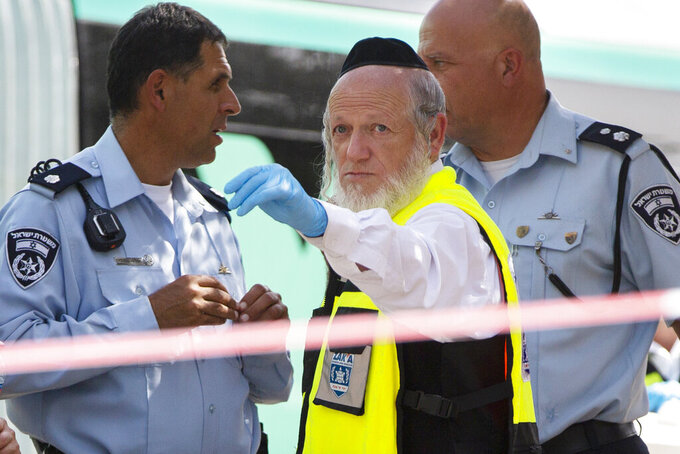 Oded Balilty, ASSOCIATED PRESS
FILE - Yehuda Meshi-Zahav, then head of Israel's ZAKA rescue service, center, stands at the scene of a shooting attack by a Palestinian gunman, in Jerusalem on Oct. 13, 2015. Meshi-Zahav, a prominent member of Israel’s ultra-Orthodox community who long served as a symbol of coexistence before his reputation came crashing down in a series of sexual abuse allegations, has died. Jerusalem’s Herzog Medical Center confirmed his death on Wednesday, June 29, 2022, but did not give a cause. He was 62. (AP Photo/Oded Balilty, File)

JERUSALEM (AP) — Yehuda Meshi-Zahav, a prominent member of Israel’s ultra-Orthodox community who founded a volunteer paramedic service before his reputation came crashing down in a series of sexual abuse allegations, has died. He was 62.

Meshi-Zahav was hospitalized last year after attempting suicide as accusers stepped forward alleging years of sexual abuse after he was awarded the Israel Prize for Lifetime Achievement, the country's highest civilian honor. Jerusalem's Herzog Medical Center confirmed his death on Wednesday, but did not give a cause.

For decades, Yehuda Meshi-Zahav was one of Israel’s most recognizable faces, widely respected for founding an ultra-Orthodox rescue service that bridged the divide between religious and secular Israelis and cared for the victims of Palestinian attacks.

He formed ZAKA in 1995, six years after he provided first aid to victims of a deadly Palestinian bus attack that killed 16 people near Jerusalem. His organization's volunteers helped identify the victims of disasters and suicide bombings and collect their remains for a Jewish burial. The group expanded to include first response paramedics and broad recognition in Israel.

But after the announcement in March 2021 that he would receive the Israel Prize, his accusers came forward, saying Meshi-Zahav committed horrendous acts of sexual abuse of men, women and children over several decades, and that the ultra-Orthodox community shielded him with a wall of silence.

Meshi-Zahav denied the allegations, stepped down as head of ZAKA, and turned down the Israel Prize in the midst of a widening scandal. The organization he founded expressed “shock and astonishment,” saying the allegations against Meshi-Zahav “arouse deep abhorrence, shock and disgust, light years away from the values that characterize the organization.”

A month later he reportedly attempted suicide in his Jerusalem apartment and was hospitalized until his death on Wednesday. Israeli media reported at the time that he had tried to hang himself.