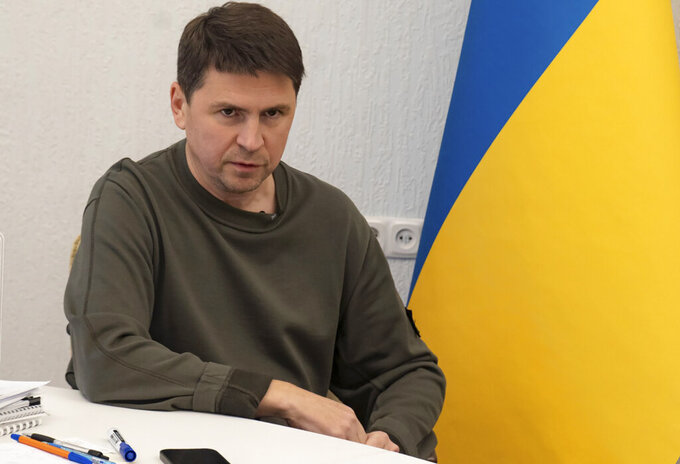 Nicolae Dumitrache, ASSOCIATED PRESS
Ukrainian Presidential adviser Mykhailo Podolyak speaks during an interview with The Associated Press in Kyiv, Ukraine, Wednesday, Sept. 28, 2022. Podolyak insisted that nothing would change on the battlefield if Russia goes ahead with likely plans to incorporate the four regions of southern and eastern Ukraine in the coming days, as it's widely expected. (AP Photo/Nicolae Dumitrache)

KYIV, Ukraine (AP) — Ukraine is determined to reclaim territory that Russia is likely to annex following stage-managed voting in occupied areas and takes seriously Moscow's threats to use nuclear weapons in the war with its neighbor, an adviser to Ukraine’s president said Wednesday.

In an interview with The Associated Press in Kyiv, presidential adviser Mykhailo Podolyak insisted that nothing would change on the battlefield if Russia moves to incorporate four regions of southern and eastern Ukraine in the coming days, as is widely expected.

“We will liberate our territory by military means," Podolyak said. “And for us, our actions depend not so much on what the Russian Federation thinks or wants, but on the military capabilities that Ukraine has.”

Ukraine and its Western allies have denounced the Kremlin-orchestrated “referendums” that ended Tuesday as as illegal and a sham, noting that many residents remain displaced by the seven-month war. They also said Moscow-installed local officials had announced the passage of the measures by suspiciously high margins after armed troops had at times gone door-to-door collecting ballots.

Pro-Russian officials in the Donetsk, Kherson, Luhansk and Zaporizhzhia regions said they would ask Russian President Vladimir Putin to incorporate their areas into Russia. Annexation would allow Moscow to treat the Ukrainian regions as official Russian territory and defend them accordingly.

Podolyak said it was vital that Ukraine retake all of its land that was seized by force. He characterized the goal as important not just for his country but for its European neighbors as well.

“Otherwise, Russia will feel that it has the right to blackmail the world, raise the stakes, escalate the conflict, and see itself as the victor in what they will see as a grievous war against Europe,” he said. "In order to ensure stability in Europe as a whole ... we must liberate our territory in full. Only this is a safeguard for the further development of the war.

Russian officials have increasingly threatened to resort to nuclear weapons to defend their national interests — a threshold that has not been crossed in wartime in more than seven decades.

Ukraine is not discounting those warnings as bluster.

“Of course, Ukraine takes this seriously, because we understand what kind of country we are dealing with,” Podolyak said.

Russia's threats are not only a concern for Ukraine, he said, because a preemptive nuclear strike by Moscow could set a precedent for other countries the world over.

“Once the nuclear weapon is used today in the 21st century, we will not close this Pandora’s box again," Podolyak said. ”Because there are many unstable political regimes that will take advantage of this situation and start speculating on nuclear weapons and try to use it in one form or another, because they will think that it is possible to do."

Podolyak, who was part of the Ukrainian negotiating team during earlier rounds of peace talks, held out dim hopes for meaningful negotiations in the near future.

He expressed doubt that Moscow is willing to engage in good faith and said Russian officials only want to buy time to regroup and reinforce their position on the battlefield.

“There is no positive development, no negotiation process," Podolyak said. “Russia constantly talks about negotiations in an ultimatum style but only speaks for an external audience, because it wants to ensure pressure on Ukraine from our partners saying that they are ready to conduct negotiations.”