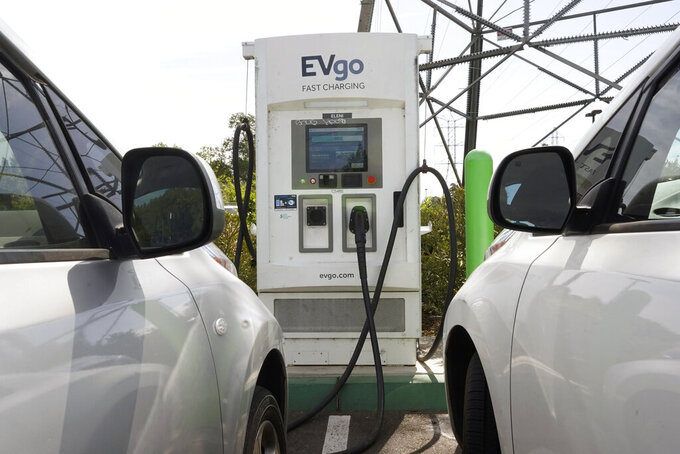 SACRAMENTO, Calif. (AP) — Heat waves and drought gripping California highlight the urgency to slash fossil fuel use and remove planet-warming emissions from the air, a top state official said Thursday as discussions began on a new proposal for how the state will meet its ambitious climate goals.

“I think every single Californian today knows that we’re living through a climate emergency,” said Jared Blumenfeld, secretary of the California Environmental Protection Agency. “And so what we’re doing today takes on additional importance and urgency.”

He spoke as the California Air Resources Board opened a hearing on a plan updated twice each decade that sets a climate change roadmap for the state. This year's plan focuses on achieving carbon neutrality by 2045, which means the state would remove as much carbon from the air as it emits.

The timeline is among the most ambitious in the nation and in the world, but the proposal has many critics. A wide range of environmental advocates say the plan does far too little to quickly lower planet-warming emissions. Business and fossil fuel groups, meanwhile, say it would raise prices and make California less affordable.

“How we achieve our climate goals matters as much as when we achieve them, and we need a plan for real zero, not net zero,” said Catherine Garoupa White, a member of the plan's Environmental Justice Advisory Committee and executive director of the Central Valley Air Quality Coalition.

California is often touted as a leader on U.S. climate policy and it has set some of the most aggressive rules for regulating vehicle emissions. The size of the California's economy — it's bigger than those of most nations — means the state's climate policies can often drive major business changes. It's 2045 carbon neutrality goal is matched only by Hawaii among states, and tracks with goals set by other major economies like Germany.

The state would reach its goal through combination of lowering fossil fuel use and using technology to remove any remaining emissions from the air. Board staff estimates it would reduce petroleum demand across the economy and the use of fossil natural gas in buildings by 91% by 2045.

Doing so would require 30 times as many electric vehicles on the road compared to today, six times more electric appliances in homes, four times more wind and solar generation and 60 times more hydrogen.

Such a sweeping transition would lower the state's emissions about 78% come 2045. Some observers note that Washington and New York, both Democratic-led states, have more ambitious targets for direct emissions reductions, 95% and 85% respectively.

Though the timelines don't offer perfect comparisons, the two states are “pushing harder and farther," said Danny Cullenward, a lawyer and climate economist who serves on an oversight board for California's carbon pricing program.

Critics from environmental groups say California's plan doesn't call for deep enough emissions cuts and relies too heavily on unproven and energy intensive carbon capture and removal. The concerns about such technology track with global concerns about the best way to tackle emissions goals.

The meeting grew tense in the mid-afternoon as environmental justice advocates who had been rallying outside walked into the hearing room and began singing and chanting over a speaker representing business interests. The air board briefly paused the meeting as chants protesting the use of fossil fuels continued.

“There are not two sides to this issue,” said Ari Eisenstadt, campaign manager for Regenerate California, an effort to transition away from fossil fuels.

George Peppas, president of a chamber of commerce group south of Los Angeles, criticized the board for allowing the interruption. He said the plan’s shift away from gas-powered cars will lower gas tax revenue that’s critical to maintaining roads and that electric cars will be too expensive for many people to afford.

The plan expects electricity demand to shoot up by 68% as more people drive electric cars and get rid of gas-powered stoves and other home appliances.

California's proposal relies on removing 80 million metric tons of carbon dioxide from the air in 2045. That amount of removal represents the “highest risk scenario" for meeting the state's climate goals, according to an October 2020 analysis by Environmental + Energy Economics, an outside consulting firm hired by the air board to model various proposals.

Liane Randolph, chair of the Air Resources Board, noted the plan calls for a major reduction in gas-fueled home appliances and a shift to electric-powered vehicles. Still, the demand for fossil fuels won't drop to zero, she said.

“There seems to be a sense that we somehow favor mechanical carbon removal and we’re leaving strategies on the table in an effort to like, make space for that, and that’s just not the case,” she said in an interview ahead of the hearing.

Right now, carbon capture is not in widespread use, though the Biden administration is spending billions to ramp it up. Some speakers were supportive of the plan's reliance on the technology.

“Deep decarbonization depends on a lot of options,” said Alex Kizer, senior vice president of research and analysis at Energy Futures Initiative, a group led by former U.S. Energy Secretary Ernest Moniz. “We see (carbon capture and sequestration) as one of the most valuable decarbonization solutions for the country and especially for the state.”

The scoping plan for the first time analyzes the role that natural and working lands, like forests and farms, will play in raising or lowering emissions. The modeling the plan relies on assumed that such land would pull carbon out of the air. But the plan later found it will likely contribute emissions through 2045, mostly from wildfires or related forest management. The air board may call for even more on carbon dioxide removal to account for those extra emissions.

The air board has 14 members, most of whom are appointed by the governor. They represent local air districts, environmental justice communities, farming, and the transportation system. They will approve the final plan by the end of the year.