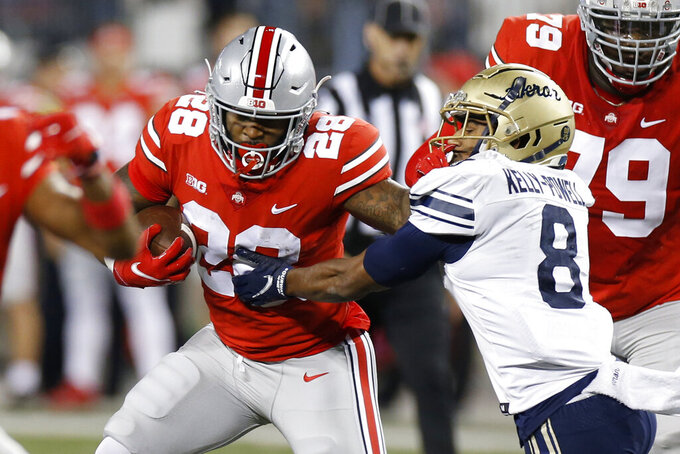 Jay LaPrete, ASSOCIATED PRESS
Ohio State running back Miyan Williams, left, fights his ways across the line of scrimmage against Akron defensive back Jaylen Kelly-Powell during the first half of an NCAA college football game Saturday, Sept. 25, 2021, in Columbus, Ohio. (AP Photo/Jay LaPrete)

COLUMBUS, Ohio (AP) — After three tough games -- including an upset by Oregon two weeks ago -- No. 10 Ohio State got a chance to break in another freshman quarterback and restore some confidence before heading into the teeth of the conference schedule.

The 59-7 rout of Akron on Saturday night likely won’t impress poll voters much, but with so many freshmen on the field the Buckeyes (3-1, 1-0 Big Ten) benefited from the extra reps and wide margin for error.

“You can certainly see there’s a lot of guys out there who desperately need these snaps and this experience to keep building,” coach Ryan Day said.

True freshman quarterback Kyle McCord overcame early jitters to throw for 319 yards and two touchdowns, and true freshman TreVeyon Henderson ran for 93 yards and two scores in the first half before being done for the day.

McCord got the nod in place of C.J. Stroud, a freshman who started the first three games but has a sore shoulder and got a breather against the seven-touchdown underdog. McCord was 13 for 18 and got credit for the first touchdown pass of his career when Chris Olave turned a jet sweep toss into a 5-yard score in the first quarter.

Henderson, who broke the school's single-game freshman rushing record last week — and in the following days picked up endorsement deals with a fast-food restaurant and a Columbus car dealer that netted him a used Camaro — continued to blossom as the next potential Ohio State star.

He averaged 11.6 yards per carry before leaving with the Buckeyes leading 38-7 at the half. He's averaging 9.5 yards per carry and has six touchdowns in the first four games.

Ohio State (3-1, 1-0 Big Ten) has struggled defensively in the first three weeks, and Akron quarterback DJ Irons exploited some holes to give the Zips (1-4) an early lead. But that didn't last long. Irons was sacked four times and intercepted twice in the first half, including a 46-yard pick-six by Buckeyes safety Ronnie Hickman.

“I do feel a little bit like in that first series on both sides we were kind of feeling our way around,” Day said. “And then all of a sudden we kick-started and kind of got rolling and played with confidence the rest of the game.”

Haskell Garrett had three of Ohio's State's eight sacks in the game.

“We didn’t hone in on our opponent, we honed in on looking at us as a unit, as a whole team,” Garrett said. “Just really focusing on ourselves and making the best of ourselves.”

Akron: The Zips show early signs of being able to make it game, but the talent deficit was too much as the Buckeyes adjusted.

“Our guys went out there and fought hard,” Akron coach Tom Arth said. “They got banged up a little bit, and they just kept fighting. Unfortunately, we just gave up too many explosive plays.”

Ohio State: The Buckeyes get what amounted to a scrimmage before the bigger games resume.

Ohio State senior linebacker K’Vaughan Pope walked off and apparently quit the team during the second quarter, then posted a derogatory tweet about the school that has since been taken down. Day said he didn’t know the details of what happened.

“One of the hard things is you have to play certain guys, and you have to make some decisions on who is playing in those games, and you just really count on the guys to still be great teammates if they’re not getting on the field,” Day said.

With a couple of Top 10 teams losing, the Buckeyes could move up slightly.

Akron: Irons started a second straight game in place of quarterback Kato Nelson, who has a foot injury.

Akron: Opens conference schedule on Saturday with a home game against the the Ohio Bobcats, who were routed by Northwestern 35-6.